Chrissy Murderbot is a busy dude. Last year he released a new mixtape every week, covering nearly every genre in electronic music you could Beatport – and others you can’t. He jockeys discs all over the globe and runs two record labels. He also has a new LP out on Planet Mu. I got to talk to Chrissy toward the end of his ninth international tour about old school video games and electronic music production.

Unwinnable: Your music video for Bussin’ Down includes images from Street Fighter II and an Xbox 360 controller plugged into an SNES, so videogames obviously color and influence your music. Are there any videogame soundtracks that have been influential to you? Would you ever sample a videogame for your music?

Chrissy Murderbot: The Mega Man games, Section Z, Shinobi, Mario games and Zelda III have all had influences on me. I once made a track that sampled the noise that Yoshi makes when you hop on him in Super Mario World.

Unwinnable: What system or era has the best sound?

C.M.: Amiga, by a long shot. But if we’re talking strictly gaming consoles, I stick with my SNES.

Unwinnable: What is your favorite retro game? Let’s just keep it pre-2000. 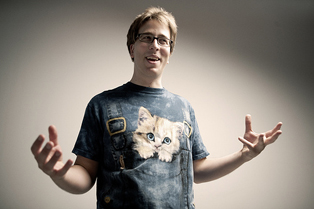 C.M.: That’s like asking me to name a favorite kid! I’d say Ms. Pac-Man because of its replayability. Or Super Mario World? I stick to the classics I guess.

Unwinnable: We’ve all heard folks refer to electronic music as sounding like “videogame music” in the pejorative sense. What are your thoughts on the phenomenon?

C.M.: Eh, it’s a comment made by people who are too ignorant to understand electronic music on its own terms. Just like people who call music with electric guitars in it “a bunch of noise” or whatever. You don’t hear the “videogame music” epithet much anymore – I think that’s due to games having more storage space and licensing “real” music, and also because movements like Chiptune have really legitimized the concept of making “real” music in the style of classic video game soundtracks. Happy to see that jab dying off.

Unwinnable: How did you get into electronic music? What were your early influences electronic or otherwise?

C.M.: I got into electronic music in the early 1990s, when my big sis was bringing home loads of pop rave anthems – Technotronic and Utah Saints and Crystal Waters and stuff like that. I fell in love with dance music on the spot and it’s all grown from there. My big influences before that were mostly new wave and synth pop, ranging from Devo to stuff like Erasure and New Order.

I once made a track that sampled the noise that Yoshi makes when you hop on him in Super Mario World.

Unwinnable: Given your busy schedule, how do you find time to search new music and still produce your own? Do you get much time for games anymore?

C.M.: I don’t have a day job – music is my day job. I have zero time for games, but occasionally I’ll get sucked into some game and play it for a week straight and completely neglect my music-related duties. The most recent were Plants vs. Zombies and an ill-advised Resident Evil 4 revisit. Oh, and Kirby’s Epic Yarn.

Unwinnable: In an attempt to demystify electronic music production a little, could you tell us what equipment you used when you started producing? What software or hardware do you use today?

C.M.: I started out with a bunch of bits cobbled together from pawn shops and thrift stores: a Roland Juno 106 synth, Casio CZ-101 synth, Yamaha RY30 drum machine, Ensoniq Mirage sampler, E-Mu ESI4000 sampler, Roland MSQ700 sequencer and a Roland VS880 recording workstation. Today I use a PC running Acid, Sound Forge, Waves Diamond Bundle, and a bunch of VST effects and soft-synths.

Unwinnable: Your earlier recordings were mostly jungle/drum and bass. Your new album is heavy on juke/footwork. Where are your tastes heading?

C.M.: Juke and footwork are only one tiny segment of what I do. Juke is the more four-on-the-floor stuff intended for the dance floor, and footwork is the faster, more sideways tracks that are meant for footwork battles. There’s a lot of overlap between the two, of course. I put out a slew of jungle 12″s about 6 years ago, and now I am not putting those out so much. I love about 297,479,813,469 different kinds of music, so I’m always dabbling in a lot of different styles.