Not long ago in a state relatively far away, there was a celebration in honor of a film series that rocks so hard it makes the Kessel Run in less than twelve parsecs.  Held annually since 2003, Star Wars Weekend at Disney World has come to define the start of my summer.

This year’s festivities are being hosted by Ashley Eckstein (Her Universe and Ahsoka Tano’s voice) and James Taylor (Obi-Wan’s voice in The Clone Wars). The special guests for this particular weekend were Bruce Spence (Tion Medon from Revenge of the Sith), Dee Bradley Baker (Captain Rex’s voice in The Clone Wars), and Anthony Daniels (who looks and sounds eerily like his character, C-3P0).  Over the next couple weeks, guests will include Peter Mayhew, Ray Park and Jeremy Bulloch.

My sister, who arrived an hour before the park opened, managed to get the very last pass to see Anthony Daniels.  She reports that he’s very nice and even signed an extra autograph for her, maybe because he was the only guest to get an air conditioned building to sign autographs in.  Everyone else was shoved into a small Sith black tent outside.  I was sadly unable to get a pass of any kind to see these talented people since seeing them required a ticket – we arrived fifteen minutes before the park opened and all the passes had been already given out.

There were also various characters scattered throughout the park.  The light side and the dark side characters were segregated so there were no faux fights to be had – with Clone Troopers and Storm Troopers wandering around making sure of that.  My friend and I stood in line for a long time in the heat waiting to get my picture with Darth Vader (success).  Jango and Boba Fett shared a stall but alternated every 20 minutes, so my friend and I had to be a little clever to attain a photo with Boba (Jango’s not as cool as Boba – fact of life people).  There were Jedi, who I love, but my friend and I felt strange about the characters that could interact (because the majority of the lines were small kids getting their picture taken).  Fun note: Figrin D’an and the Modal Nodes wandered around the Star Tours queue and one of them cut the line to startle people.  My friend and I, needless to say, found this hilarious.

I have to confess that seeing Darth Vader dance to “Thriller” is probably something that I’ll giggle about every single time I think about it.

Speaking of little kids.  Undoubtedly the most adorable part of the weekend (and every day in front of Star Tours) is the Jedi Training Academy.  Little kids, aged 4 – 12, are invited to take up a robe and train in the ways of the Jedi lightsaber combat.  They are instructed by a bonafide Jedi Master and his (or her) former Padawan.  This sounds like a great plan until who shows up but Darth Vader.  The little ones (not the Jedi Master, no, of course not) are then dispatched to take down the menacing Sith Lord who, strangely enough wields a training lightsaber.  Rumors tell me that this attraction may soon be moved indoors and to another planet where a certain Jedi Master in exile would be teaching the younglings… We shall see.

After training with the lightsaber, little Padawans could then go and take the “Padawan Mind Challenge” and show off their ability to retain information about their favorite series.  My friend and I were not allowed to enter because we were over 12.  We would have totally won.

The showpiece of the event was the opening of the new Star Tours ride.  The first weekend, it was christened by the maker himself.  If there was a point over the weekend that the line was less than an hour wait, I missed it.  Even with a Fastpass, the line is long.  However, there is a lot to look at and be entertained by (this is Disney, after all) while you’re waiting including a quirky droid x-raying passengers’ bags and one that just tells corny jokes. 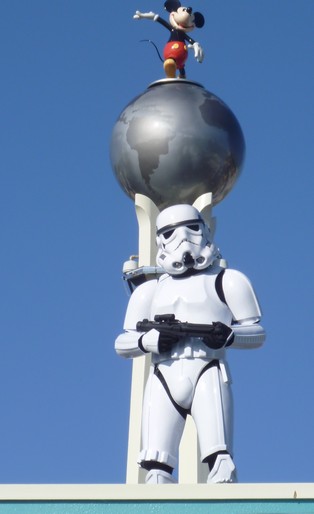 Now you’re asking if waiting an hour for a five minute ride is worth it.  Here’s the short answer:

Closing the day’s festivities was Stig and Oopla’s Hyperspace Hoopla.  If it sounds silly, well, that’s because it is.  But, it is also hilarious combining the cleverness and showmanship that Disney offers with the geekiness of Star Wars.  I had the chance to see it last year, and I have to confess that seeing Darth Vader dance to “Thriller” is probably something that I’ll giggle about every single time I think about it.  You watch all your favorite characters have an epic dance fight.  The fate of the rebellion is fought over in a light side versus dark side dance off with a finale that… well, the finale gets a little awkward for everyone involved (read: they play up the incest).  It’s campy but worth it.  This year, Emperor Palpatine breakdanced.  Yeah.  You think about that.

Overall, this was, as it always is, a fun and memorable event.  It has grown in popularity and seems to be continuing in that vein.  While there aren’t a lot of events geared toward the bigger kids, the fun is family friendly and helps include non-Star Wars fans into the excitement.  I hope it remains at Disney World for a long, long time.  And I have a very good feeling that it will.  This year, it will run every Friday, Saturday and Sunday from May 20 – June 12.