Last week, Ian lamented the news that DC Comics was resetting their entire comic line to #1. Brain Bannen disagreed. This is his rebuttal.

DC caused quite the stir with their announcement that they plan to reboot the entire DC Universe starting in September. They’re going to release a whole batch of new #1’s, including such veteran series as Action Comics and Detective Comics. The reboot will kick off with a new Justice League, and then fifty more issues will be pushed back to #1 as well.

Personally, I couldn’t be more excited by DC’s decision to finally grow a pair of balls and do what they should have done a long time ago.

While I understand comic collectors may be quite pissed off (suddenly their low number issues may not be worth so much), from a marketing perspective, I think this will, initially, make DC a lot of money. In addition to releasing a slew of first issues, they’re going to have their titles available for digital download on the same day, so they’re appealing to the technologically savvy iPad crowd as well as a younger generation of comic book fans who may be too intimidated by the high numbers of issues in a series to pick up a comic.

Who wants to start Superman at #577? There’s already so much back story that a reader could feel hopelessly lost. If a reader were to pick up a random comic from the major characters, say Spider-Man, Batman, or Superman, they’d find themselves already steeped in a deeply developed story. Plus, #1 issues usually sell out because they’re #1 issues.

This is all money in the bank. In order to keep this going, however, DC is going to need stellar writing. Enter Geoff Johns.

I also think fans may be nervous at the idea of altering the histories of some characters in order to create new and interesting storylines. I submit, as Ian did, that Geoff Johns already did this (and did this well) with Infinite Crisis, as well as Green Lantern and Flash. Johns has shown that even if you reboot a character, you can still appeal to his/her core fan base. Green Lantern is more popular than ever, and Johns’ writing has led to the Green Lantern movie being released in a few weeks. I trust Geoff Johns to do the right thing. There may be sweeping mysteries, but they’ll be epic. And beautiful to look at.

Lastly, this has already happened, and successfully. Marvel Comics started its Ultimate line more than ten

years ago and it’s still going strong. Ultimate Spider-Man has lead to a renewed love with the character – and a new Spider-Man reboot movie that supposedly borrows heavily from the Ultimate universe. Because fans didn’t want to try and get into a series that was already six hundred issues old, Ultimate comics gave people the opportunity to start fresh with a new character.

Think of how many new DC stories can be told! No more married Clark Kent! No more one-armed Aquaman! No more biker-chick Wonder Woman!

Rather than trying to revamp a character within the normal continuity, DC has an opportunity to create them fresh, give them new depth and introduce them to a new generation of readers. Marvel has taken so many chances with its characters and these have all paid off. Fans said they were going to run when Spider-Man was rebooted after One More Day. They didn’t. They stayed on, read the comic in droves, and now we have the stellar work by Dan Slott. Remember when Thor was cloned? People were so pissed! Then J. Michael Straczynski released a new Thor series, and we just had a Thor movie. Johnny Storm was recently killed in Fantastic Four. FF seems to be doing just fine without him.

What I’m saying is that this isn’t a bad thing. This is a nice, shiny, new car – complete with new car smell. Everyone loves new car smell! And if this turns out to bite DC in its proverbial ass, just remember the one caveat of comics: nothing that dies ever stays dead. 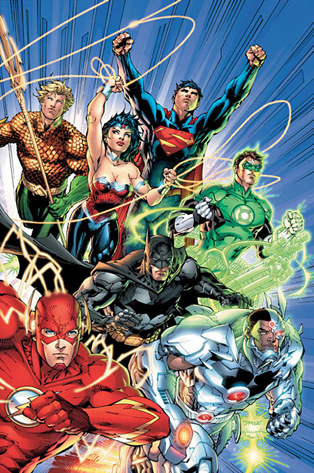