It’s my 29th birthday, 2009. I’m staring into an elaborately decorated, flaming bowl of punch. The bar is dimly lit. The flame in the center of the bowl gives the surrounding liquid a lava-like quality. I can smell mostly punch and flame, but my friends who bought me this drink assure me that there are at least four different kinds of alcohol in it. It is called a Zombie. As happy as I should be I feel empty, as if my soul was providing the fuel for the flames in the fruity alcoholic concoction below. Here is my tale of woe, one that started with fanboy wonder and ended with a flaming punch bowl full of almost every alcohol imaginable. This was the day Xavier’s dream died.

I’ve seen the trailers for X-Men: First Class, which opened this past weekend. Young Charles Xavier and Magneto fighting the good fight in 1963 looks great. An X-Men team rocking the yellow and blue suits is even cooler. A great ensemble cast featuring James McAvoy, Michael Fassbender, Jennifer Lawrence, and Kevin Bacon is a step up from the Wolverine flick. Director Matthew Vaughn, who is not Brett Ratner, gives me cause for hope. I’ll probably see it, but I’m afraid. 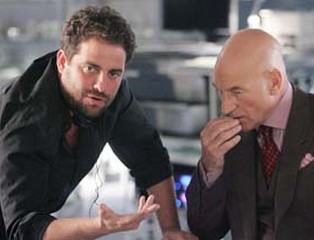 I remember seeing the first X-Men movie in my hometown theater. Up until X-Men (2000), good comic book movies either featured Superman or Batman or Blade. Then there was Roger Corman’s Fantastic Four and J.D. Salinger’s son in Captain America, but we won’t talk about that here.

X-Men was a major victory. Years and years of imagining a big screen adaptation of my favorite superhero team finally came to fruition, and it wasn’t bad. There was a tall Australian Wolverine sure, but he got a lot of things right (he adlibbed the word “bub” into his dialogue). Xavier and Magneto were great, and portrayed by excellent actors. Anna Paquin played an effective Rogue, even if she was kind of more of a Kitty Pryde/Jubilee sidekick character to Wolverine. Cyclops and Jean Grey were also perfectly fine, if not exactly as scene stealing as the aforementioned characters. Rebecca Romijn-Stamos was naked and painted blue, and Halle Berry tried out a bunch of accents while wearing a white wig. At the time, the only movie based on a Marvel Comics property that came close was Blade, so it passed the quality test with flying colors.

Up until X-Men (2000), good comic book movies either featured Superman or Batman or Blade.

2003 rolled around and I saw X-Men 2 aka X2 in my college town cineplex. The opening scene of Nightcrawler breaking into the White House blew me away. The movie had some excellent action sequences, and a cliffhanger ending promising the fan favorite Dark Phoenix. I couldn’t wait for X-Men 3!

Flash forward to 2006: I was living in Montclair New Jersey in a third floor apartment with Bee Tee Dee. It was the opening weekend of X-Men 3 aka X-Men: The Last Stand. It was hotter than hell outside, and even though our apartment had central air it was on the fritz that day (things being on the fritz was a reoccurring theme in that apartment). I decided to go see a Saturday matinee alone in nearby Verona. I had seen the trailers online, and while something seemed off there was also tons of new characters and promises of insane action and the Dark Phoenix. It was a packed house, the air conditioning felt good, and I had a soda and box of popcorn in either hand.

The weak opening sequence involving The Danger Room and Sentinels was corny but forgivable fan service, although little did I know it would be one of the best scenes of the whole movie. The death of a major character within 20 minutes was confusing, but let’s see where they’re going with this. About 40 minutes after the opening credits I could no longer make excuses for all the obvious errors (who was the huggy porcupine guy?), this was simply a terrible action movie. I could feel the fanboy joy being sucked out of me, and I threw my refreshments away in disgust before the end credits started rolling. The evil mutant known as X-Men: The Last Stand would not claim any more of my soul.

At that point I was not going to see every comic book movie that came out. X-Men and Spider-Man were strong showings in the early half of the decade, with sequels that were superior. Batman Begins happened, and it was good. Sadly there was also Daredevil, The Hulk, Punisher, Ghost Rider, Elektra, and that terrible terrible Catwoman movie with Halle Berry.

Around my 29th birthday I went with three friends to go see X-Men Origins: Wolverine. I was skeptical due to my depressing experience with the third movie, but those trailers looked so good! Like many lads in the late ‘80s and early ‘90s I thought Wolverine was the shit. He was small, hairy, had adamantium claws, and could fuck up anything that stood in his way. The trailers seemed to promise that, as well as an articulate Sabretooth he could trade quips with, Deadpool and Gambit!

I lost my soul that night, as trailer trickery made me sit through a movie where Charlie from Lost played with toys, Will.I.Am teleported around, and Deadpool was replaced by Baraka from Mortal Kombat. There was also some guy in a trench coat who was trying out different accents and turned out to be Gambit.

We did stick around until the end of the credits, most likely in shock from the shittiness we were just exposed to. Deadpool/Baraka’s decapitated head is laying on the ground, his eyes open, and like a librarian he goes “Ssh.” I feel like he meant to say “Ssh, don’t tell anybody how fucking awful this movie is.” 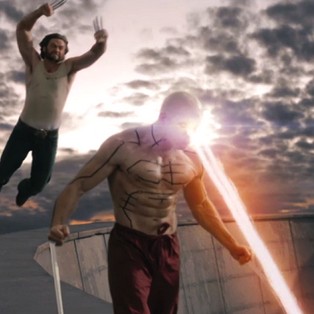 My friends and I left Union Square Theater in Manhattan in silence and defeat. We proceeded over to Otto’s Shrunken Head where I would eventually encounter the previously mentioned flaming tiki drink called the Zombie. On their website they claim “It kills you, then brings you back to life”, promising resurrection like many of the X-Men have experienced them in the comic books. Alas, it was still not enough to get over the stain on my brain that was X-Men Origins: Wolverine.

So here we are: another summer and another X-Men movie. I will probably summon up the courage and see it, it will probably exceed my low expectations and pleasantly surprise me, and there will probably be things in it that flare me up inside where the damage had been done from the previous movies. Nevertheless I had to get all of this off my chest before I can go forth. The trailer does look good…

Superhero Movie Smack Down – Round 2