Another year and another peek into the lives of Buddy and Lisa Bradley who are survivors of the Seattle grunge scene that have since settled with their son, Harold, in New Jersey, Buddy’s homeland. Even though creator Peter Bagge ended the series in 1998 after only 30 issues, he continues to put out annuals each year that typically have a Buddy and/or Lisa mini-story as well as a sampling of various other comics and essays that he has since published in various music, tabloid, and political media outlets. The interesting thing about this annual is that most of it is dedicated to the characters of HATE, and longtime readers (and Buddy) are finally introduced to Lisa’s dysfunctional family. 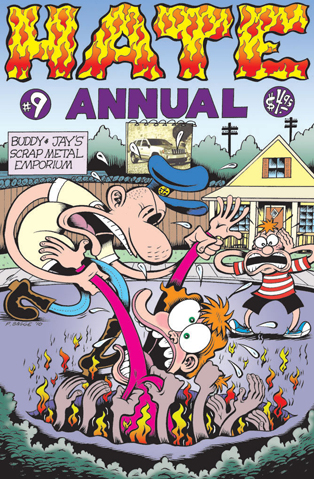 For those of you who could not make heads or tails of the above paragraph, I highly recommend checking out the original HATE series, which has now been compiled into a convenient two volume collection. A milestone of 90s underground comic books, it managed to combine relatable and often reprehensible characters into hilarious situations in both Seattle and New Jersey. Not only did it accurately portray the rollercoaster of an average person’s twenties, it also provided an amusing insight into relationships, pop culture, family, religion, death, mental health, and weird bars in New Jersey, to name just a few topics.

If you haven’t read the original series yet, then this annual is not the place to start. If you have then I highly recommend picking this up, as the events in this comic actually change the game for the Bradley family. I don’t want to go into it for fear of giving anything away, but basically life is good in the New Jersey junkyard for our key characters, until Lisa randomly receives a phone call that brings them all back to Seattle. Things are not well with her parents, and Buddy not only discovers firsthand how messed up and parasitic her relatives are, but that Lisa has not told him the full story of her messed up childhood.

While this may sound pretty heavy, Bagge makes lemonade out of lemons and manages to find humor in the situation by magnifying the awkwardness via Buddy’s point of view. One particularly weird and hilarious scene is Buddy going out on the town with Lisa’s white trash cousin Leroy. The random characters that they encounter remind me of what I loved about the original series, and even Bagge’s 80s comic Neat Stuff.

By story’s end a major decision is made. If you are a diehard fan like me you will be hoping that Bagge will not wait another year to continue this storyline.