Recently, David Goyer penned a short story for Action Comics #900. In it, Superman tells the president’s National Security Advisor that he renounces his U.S. citizenship. “I’m tired of having my actions construed as an instrument of U.S. policy,” he says, “Truth, justice, and the American way – it’s not enough anymore.” The story has caused quite a stir. Fox News picked this up and ran with it, asking former Arkansas governor Mike Huckabee his reaction. Huckbee said the story was “disturbing,” and called it a “disturbing trend” of people apologizing for being American. Writer Johnathan Last wrote “If Superman doesn’t believe in America, then he doesn’t believe in anything.” And while I appreciate the fact that Superman got some face time in the national media, we have to be honest with ourselves. This is not an interesting story, nor is it as controversial as it’s made out to be. Why? Because, like it or not, Superman just isn’t that relevant anymore.

Let me start with the story. Superman meets with the president’s security advisor to discuss an international incident. Superman took it upon himself to fly to Iran’s Azadi Square in an attempt to show “solidarity,” and “nonviolent resistance” to both the current group of protestors and the Army of the Guardian of the Islamic Revolution. After  24-hours, Supes leaves and flies home. The “incident” causes international turmoil, and drives Kal-El to claim that he is no longer a citizen of the United States.

As he leaves the square, he turns and sees a protestor and a solider exchanging a rose. I shit you not. This is meant to echo, I think, the Kent State massacre where, supposedly, a young girl put a flower on a soldier’s rifle and told him “flowers are better than bullets.” This scene was reenacted in Zach Snyder’s Watchmen movie, and now by David Goyer in “The Incident.” The whole idea, however, of Superman renouncing his citizenship is – to put it bluntly – dumb.

This is not an interesting story, nor is it as controversial as it’s made out to be. Why? Because, like it or not, Superman just isn’t that relevant anymore.

I think I know why DC asked Goyer to write this piece: he’s penning the next Superman movie, which is supposedly entitled Superman: The Man of Steel. But this story is just pointless. It seems, much like JMS’ current Superman story “Grounded,” in which Superman is walking across the U.S. to reconnect with the people that Goyer wanted to do something different.

The problem is that the story isn’t very good. It’s meant to emphasize the fact that Superman is too big for one nation, but in the previous ten to fifteen years, he’s been anything but an American property. Most recently, Superman’s main story involves the return of Doomsday, the character responsible for his death in 1993. It doesn’t take place across America, they won’t pound the piss out of each other in the streets of Washington, D.C. and I bet they smack each other around right in Supes’ own backyard: the fictional city of Metropolis.

I remember a story arc that went on and on involving Superman being brought to trial on a distant planet in another quadrant of the universe. It didn’t involve him fighting Nazis, communists or terrorists, all of which seem to be things that would pop up in a story centered on both American culture and historical/current events. In fact, Superman hasn’t uttered the phrase “Truth, justice, and the American

way” in a long time. I’ve been reading Superman comics for close to twenty years now, and I can honestly say that I don’t ever remember him saying that. It’s a throwback to the early years where Superman was a symbol for America – he was everything good, honest and pure about this country. But times have changed, and so has Superman’s impact on the world.

When I think of characters that represent America, I think of Steve Rogers, a.k.a. Captain America (the guy’s superhero persona has the word “America” built right into it, for Christ’s sake.) I think of Spider-Man, not because he’s a symbol of America, but because he represents the city of New York. Whereas DC likes to use a lot of fictional cities, Marvel likes to place their stories in our world. Marvel even published a special edition Spider-Man comic (Amazing Spider-Man #36) which took place on September 11, 2001, and showed Spider-Man working with police and firefighters to rescue people. That is what I think of when I think of America.

Sad as it is, Superman has slipped in status in recent years. He’s no longer the king of the DC Universe. It seems like writers don’t know what to do with him anymore. He’s not a normal guy, so writing about him having “normal guy problems” isn’t going to be realistic. He’s not the ever struggling Peter Parker. Nor is he the brooding figure of Bruce Wayne. He doesn’t have the ego of Hal Jordan, nor does he have the wit of Oliver Queen. He’s altruistic, represents everything good about humanity and is a symbol of peace, and hope and honor. He’s the ideal person, and that makes people sick. No one wants to read about Superman’s perfection because humanity isn’t perfect. 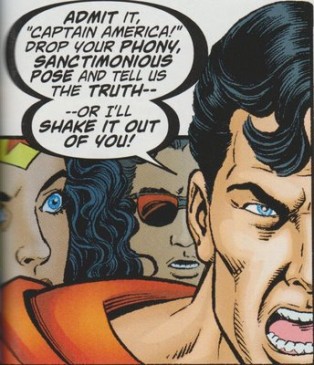 Seeing Kal-El feel guilty about not being able to help enough people during a city-wide disaster isn’t as heart-wrenching as watching Spider-Man try to swing across the city in time to save people from annihilation. Why? I don’t know. I wish I had an answer but I don’t. I love Superman. I’m captivated by the idea of Superman. But I still feel like there’s not much to do with him. And it seems the writers have felt the same way as each new arc lends itself to more and more banality. So when Superman tells the world that he’s no longer claiming he’s an American, I don’t see a reason to fret. Partly because the story, with its saccharine message, is eye-rolling at best, but mostly because when people see humanity, they see its greed, war, poverty and hatred. There’s just no room for Superman in a world like this.