Over the years, dozens of characters have tapped into the Speed Force — five Flashes, Max Mercury, John Fox, Impulse, two Kid Flashes, Jesse Quick and Johnny Quick come to mind, and that’s just off the top of our heads and not counting villains. With so many to choose from, everyone has their own favorite speedster. Now that Flashpoint is taking the DC Universe by storm, there is no better time for Unwinnable’s Flash fans to explain why their favorite is the best — and why everyone who says differently is an idiot.

Ethan Sacks:
With the introduction of Barry Allen as the Flash in 1956’s Showcase #4, DC Comics stumbled on lightning in a bottle.

Running so fast that he turned his ultra-cool costume into a red-and-gold blur, Barry Allen did more than just vanquish the rogue du jour — he revived the super hero comic book. Superman wasn’t exactly flying off shelves in a single bound in those days, until he and the rest of the super hero fraternity — both DC and rival Marvel’s pantheons — followed the trail blazed by writer John Broome and artist Gil Kane’s great creation.

Then the publisher goes and decides to throw comic book fans’ world into a Crisis and kills him off. Of course Barry, being the consummate selfless hero, dies saving the world — sacrificing himself to destroy the Anti-Monitor’s cannon. 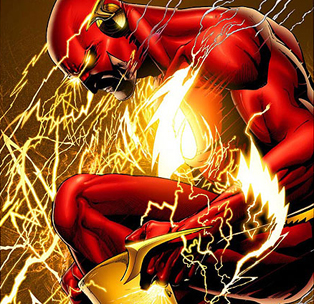 It falls on Kid Flash, Wally West, to fill those big yellow boots. But the thing is, lightning doesn’t strike twice. He was fine as the lottery-winning hothead, but once he settled down, he slowed down. Sorry, Stu, but the Fastest Man Alive shouldn’t stop running long enough to knock up his wife. The result: two annoying brats that take up valuable panel space.

And Bart Allen? Really, Ian? Is Vibe your favorite Justice Leaguer, too? If he’s a glimpse of what we have to look forward to in the 30th century, then we can only hope Skynet wins this time.

Kurt, I’d argue about John Fox, but I think your brain has been lost in the Speed Force. That’s the only explanation I can come up with why you’d choose a white-haired lunatic who mercifully runs fast enough that we don’t get too close a look at how tight his BLUE unitard is.

Flashpoint reminds us how horrible a world without Barry Allen is — those Blackest Nights when he was lost to us for 22 years and those Brightest Days since his return. And the best part is that Barry Allen is just getting back up to full speed…

Kurt Christenson:
I agree that Barry’s return — while undoing the one tried-and-true example of a genuine superheroic death in Crisis on Infinite Earths — was a momentous occasion for not only superheroes but also comic books as a whole. If ever the DC Universe needed the square honesty and morality check that only Barry Allen can provide, it’s now. Things are pretty grim. 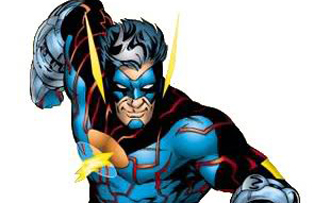 But Barry’s got big boots to fill and I don’t think Geoff Johns has the gumption to fill them. I do agree he is the man best suited for bringing back the Flash, and it’s not just because he pulled off the return (and redemption) of Hal Jordan — it’s because he’s a fanboy.

That’s the secret of the Flash. Barry called himself the Flash after his comic book hero Jay Garrick. Wally West, the nephew of Barry’s gal pal Iris West, was the president of the Flash fan club. Eobard Thawne was so obsessed with the Flash that he sought to replace Barry as the Flash in his distant past. The core of the speedsters is hero worship, following in the footsteps of others.

That’s why I stand by John Fox. With other aspects of Grant Morrison’s DC 1,000,000 event finding their way into All-Star Superman, the moment is right for the time-traveling speedster to step up and be recognized as part of the Flash legacy. Bart will have his day, and Wally’s daughter Iris will be Kid Flash during Kingdom Come times.

[T]he moment is right for the time-traveling speedster to step up and be recognized as part of the Flash legacy.

But right now, a time-skipping Flash has a lot of potential and the benefit of a pretty open continuity. After all, it takes every one of the speedsters to match Johnny Quick’s Speed Force. Why not give the hero-worshipping underdog a chance to redeem himself as a hero?