Let it be known that I love Russian prostitutes and toilet humor.

The moment I needed to make a net out of an old condom and a shoe lace, I knew I was not going to care about the story in Hector: Badge of Carnage. Considering that this happened in the first five minutes of game play, things were not looking good. 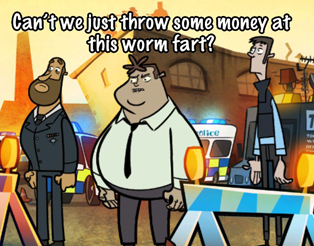 On a positive note, the gameplay is very solid, thought that is to be expected. I wonder if Telltale Games has a machine where you simply plug the parameters you want, push a button and a point and click game is

created. Click here, walk there, talk to so and so. I can usually enjoy that for an hour, but not with this game. I only have a certain tolerance for bad story and solid game play. That was used up this year on Alan Wake.

Let it be known that I love Russian prostitutes and toilet humor.

Telltale has too many interesting games coming out for me to get hung up with this one. Having recently acquired the rights and talent to make Back to the Future, The Walking Dead and a rumored reboot of the Kings Quest series, Hector: Badge of Carnage is an embarrassing game to play. I will not waste my pointing and clicking on this game.

I like low brow and lowest common denominator humor, but the humor part of the equation is key and Hector doesn’t have it.

If this character has fans, excuse me for offending them. I would assume they are like Juggalos and I would be surprised if they even had computers at all. The same company that resurrected the Sam and Max series and the Monkey Island games embarrasses me with Hector: Badge of Carnage and its British version of Peter Griffin.

Ignore it, mock it, run away from it, just don’t use Hector: Badge of Carnage to measure the level of quality that Telltale usually puts out.

Russian brides missing! Find out where they’ve gone by following @JapanDudeGirl on Twitter.