In lieu of our regular, irreverent geek culture coverage, today Unwinnable pauses for Matt Marrone to remember a legend.

I’d like to share some buried treasure with the readers of Unwinnable, something I don’t think you need to be a sports fan, or a newspaper reader, to appreciate.

As a former New York Daily Newser, I had the pleasure of working with, and getting to know, legendary cartoonist, columnist and editor Bill Gallo, who died Tuesday night at 88 – and whose funeral service I’ll be attending today.

I can go on at length about Gallo – a giant of the business whose death touched all parts of the country, but resonated especially here in the Big Apple, garnering both front and back pages of the News, and a pre-game tribute at Yankee Stadium – but there have been thousands of words written this week about him, many of them much more eloquent than mine could be.

The best way I could pay tribute was through Gallo’s own words. I tried to speak to him when I had the chance, and seek his advice when I needed it, stopping by his office for a quick chat here and there.

One of those times, I brought my tape recorder. 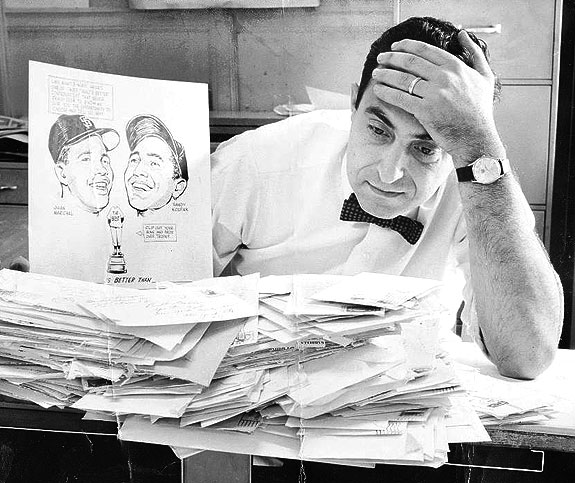 I’ve posted three short podcasts of Gallo telling me his life story, over at ESPNNewYork.com, where I am an editor. I hope you take the time to give them a listen – the stories about developing his artistic style, staying true to himself in his early days and his relationship with late Yankees owner George Steinbrenner, which I describe in more detail on the site, are simply priceless.

You didn’t need to be a journalist, or a sports fan, to get Gallo. He was a constant in the city, and in the paper, for 70 years.

Take a few minutes and let him tell you his story.

Several Unwinnable contributors have had the distinct pleasure of working with Mr. Gallo. We join Matt in wishing the Gallo family our deepest sympathies and remembering Bill as the real heart and soul of the Daily News.