Recently, Unwinnable had the pleasure of attending Sleep No More, an immersive performance by London-based theater company Punchdrunk, currently running in New York. The show is set on several floors of the fictional McKittrick Hotel, and visitors are directed only to go wherever they desire inside the building, to experience the action in any way they choose—but to remain, like the actors most of the time, completely silent. It’s disorienting, it’s fantastic, it’s Macbeth in ’30s dress.

Throughout the three-hour performance—which to us felt like a stroll inside a David Lynch film—we had numerous adventures, from watching Lady Macbeth standing stark naked in a mental hospital bathtub, washing blood off herself, to peering through a tiny hole in the side of a shack, deep in the woods, to see what would happen when a fellow theatregoer was lured inside—only to have the door and windows slammed shut behind her.

The following is our favorite story of the night.


It’s early in the evening. You’re wearing a white, Venetian-style mask. You walk into a nightclub, dimly lit and filled with smoke, making it tough to tell where the room begins and where it ends. There’s a red curtain on the far wall, framing a small stage with a table for two, similar to those spread around the rest of the club—on one of which, for reasons you wouldn’t feign to guess, lies a baby doll, naked and bloody.

Nothing happens at first, so you decide to explore the room, trying not to bump into walls. Like so many parts of the McKittrick Hotel, right down to the drawers and chests, the telegrams and handwritten letters, the area behind the bar is fully accessible, and you rifle through it—but you can only go so far before you have to turn back.

Just as you’ve stepped out again into the center of the room … the girl in the red dress appears.

She doesn’t say a word, just silently draws you toward the table on the stage, where she sits down, deliberately putting on a pair of gloves as sultry music swirls all around. 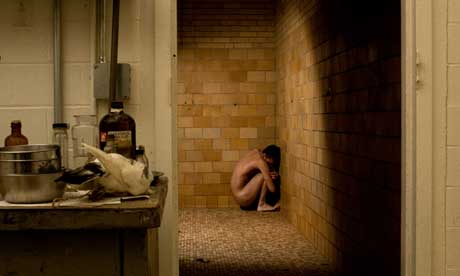 By now you’re not the only masked person in the room, but there are only a few scattered here and there, and as you approach the table, you come the closest to the girl in the red dress. You’re allowed to watch from virtually any angle, even creep up and peer over a character’s shoulder as she writes a note. But as you watch the girl in the red dress’ every movement, seemingly protected by your anonymity, you become transfixed by the idea that, this time, she is staring directly at you.

It must be an illusion, surely, because she seems too distant, too otherworldly, to be connected to anything around her.

That is, until she stands up and slowly starts to approach you. 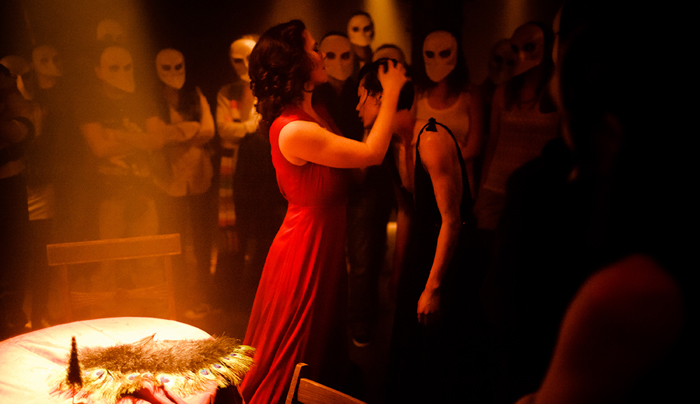 You are frozen solid by her deep, penetrating stare. Can this be happening? You’re a spectator, not a performer, after all, and yet there she is, a few inches in front of you, staring deep into your eyes without a blush or a smile or a nod or a wink. Nothing, not even a blink, to betray her character, nothing to break the fourth wall, which suddenly isn’t a fourth wall anymore, isn’t even four walls, but hallways and staircases and ballrooms and bedrooms and mental hospitals and graveyards.

You expect her to come no further, to suddenly whisk herself away into the darkness, luring the curious into her next scene, or down to the ballroom for an all-company dance or the show’s finale, a feast that ends in death.

She doesn’t disappear. Instead, she reaches her arms out, impossibly, and runs her hands across your shoulders. Half a beat later and she’s stretching still further to run her fingers through the back of your hair, almost like a dare.

You don’t flinch, or say a word, or shift your breathing. You just wait. And then …

And then she pulls you down toward her, still penetrating you with her eyes, leans seductively into you and presses a long, deep kiss onto the lips of your mask. 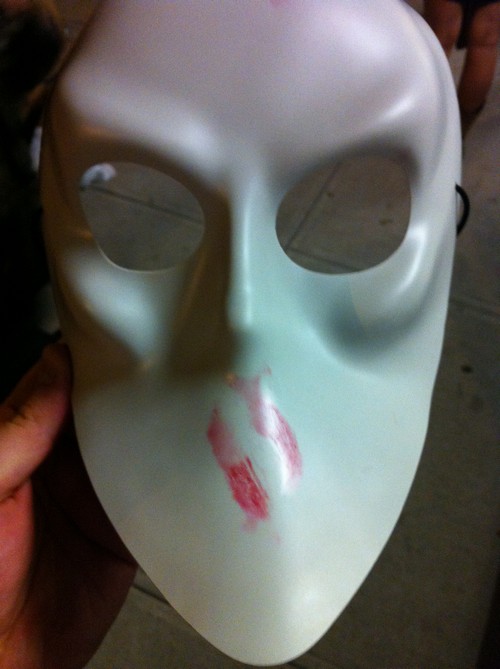 Before you can register what has just happened, let alone soak in the surreality, she is gone, lost in the smoke. You want to follow her, but you’re too new to the game, so you search aimlessly until you end up on a street lined with small shops and houses, where another girl, dressed in plain garb, is locked in a violent struggle with a well-dressed man.

She breaks away, frantically unlocks a pink door at the back of one of the houses, and rushes through it.

You chase her, and your next adventure begins.

Matt Marrone didn’t realize until he was on the coat check line that he had been walking around all night with a lipstick stain on his mask. Score! To buy tickets to Sleep No More, which recently was extended through June 25, click here. Follow Matt on Twitter @thebigm.

Rookie of the Year: Hell’s Kitchen