For those who don’t know, Sleep No More is an immersive, interactive (to a point) play that takes place inside a fictional old, renovated hotel on Manhattan’s West Side. The stage is composed of all five floors of the building, each floor a different set. The first floor I was on was a kind of market arcade with a candy shop, tailor, photographer, witchy apothecary shop, speakeasy and more. Some of the other floors included forests, apartments, a ballroom, graveyards with crumbling stone walls and statues of angels pointing ominously off into the darkness.

The play happens all around you; it’s like being able to step into a film and just follow certain plot threads or characters. The audience wears white Venetian-style masks during the performance. This is for two reasons: 1) you clearly know who the actors are by their lack of masks and 2) it helps separate you from the fact that you’re watching a play. At some point, it starts to feel like you’re all ghosts following these people around. At other times it feels like the actors are the ghosts as they act out scenes in loops, going through the same motions over and over again.

Later – much later – I stood in a narrow tool-room watching a dark-haired woman read a letter, just the two of us. I skimmed the page from over her shoulder. It was from Macbeth and was about the three weird sisters. Minutes before, this woman was taunting a pregnant woman with some kind of addictive drink, withholding it from her and making her climb chairs to get at teacups of the stuff. They performed a remarkable and desperate dance in a small dining room, kicking off of walls and climbing over tables, dodging ghost-faced spectators. But now, in that room with her reading the letter, all was quiet. A man started screaming. We both looked toward the doorway: blackness. Then she stood and walked toward me, almost passed me, but stopped and took my hand.

She led me through a dark hallway to a set of descending stairs. Above the stairs was a massive stained-glass window, blue and red and backlit. There was organ music playing and I was walking, hand-in-hand with this strange woman.

I followed her into a kind of dining room, but the table was high up on a stage – I had been here before, earlier, so I assumed I was going to see something that I’d already seen. She led me through the crowd to the back of the room, and we stood next to each other as we watched the table scene. It was set up like the Last Supper, with all the principal actors moving in slow motion and acting out the culmination of their deeds. I had not seen this before. The dark-haired woman moved behind me and put her hands on my shoulders, pressing up close to my back as we watched – in horror – what was happening on that stage. 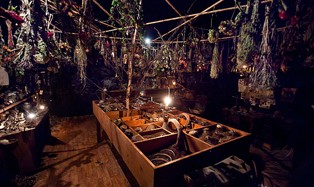 After it was over, she faced me, took my hand and once again led me through ghost-faced spectators and dark hallways. Eventually, we got to a red room with a jazz band playing. She drew me across the dance floor and into a corner. I thought she was going to dance with me, but she turned me around so that my back was to the corner and then slowly reached up, gently lifted the mask off my face, leaned in and kissed my cheek. She handed me my mask, I whispered, “Thank you,” and with a small smile she spun away, disappearing amongst red curtains.

I left the theater shaking, and I am still, right now, having trouble going back to the real world after such an intense fictional experience. For three hours I was a ghost, able to move and react with impunity. But if I was a ghost then, why does the real world feel so pale in comparison?

Tim Mucci now sleeps no more. Catch him at all hours on Twitter @timx13.

Welcome to My Nightmare – Rise of Nightmares Reviewed