It is a gray and rainy morning in New York City.  While the weather begs me to channel Broadway Danny Rose and head straight for the Carnegie Deli, I instead make my way to the Discovery Times Square Exhibition Space. Abandoning upper-middle class neurosis for magic, and shedding my signature fedora, necktie and vintage men’s clothing (“La-di-da, La-di-da, la-la”) for my house robes, I hurry to catch the train that I know is waiting; the train that is headed for Hogwarts School of Witchcraft and Wizardry.

I was lucky to attend the sneak preview of the new Discovery Times Square Harry Potter: The Exhibition last Friday. The show is comprised of props, costumes and set pieces featured in the Harry Potter films.  There are many things I find charming about the films. The first two films absolutely brought the books to life (while staying true to the plot, thank you Chris Columbus) and the subsequent films (while dropping the ball on the plot in many ways) did offer cool visual movie moments and many fun and exciting effects. So, while I may grumble, admittedly loudly, at each recent installment, I am still dutifully there at the midnight release, and as such had to be there on opening preview day for this show. After all, this very clearly fell into the “cool visuals” and “fun and exciting effects” category.

Upon arriving at DTSX, we were ushered into an ante chamber where our group was warmly welcomed by a representative of Hogwarts, probably a prefect, in full uniform. He spoke of the many magical things we were going to experience on our journey through the world of Harry Potter.  The sight of a wooden stool and oh-so-familiar brown hat foreshadowed the first interactive experience.

As the rep was finishing his expository speech, he asked for volunteers to be sorted into their respective houses. Not surprisingly, the volunteers were not children, but full grown and very excited adults. It was actually really cute. More surprisingly though, I was one of them (thanks to my boyfriend for thrusting my arm in the air!) Not so cute.

It is definitely an odd feeling, sitting on a platform, on what feels like a dunce’s stool, with the Sorting Hat on your head, while a room full of people look at you and the Hat’s voice booms in surround sound. “No pressure, just the next seven years of your life”, our liaison says. After I did a quick check to make sure that none of my blouse buttons had popped open, thereby revealing my Quaffles, (this is the female equivalent of checking your fly), I had just enough time to hear, “Hmmmm….cunning…ambitious, strong…must be SLYTHERINE!”. Queue applause. I departed, grateful not to be a Hufflepuff, and heard our guide tell everyone to “keep an eye on that one, don’t let her out of your sight.” 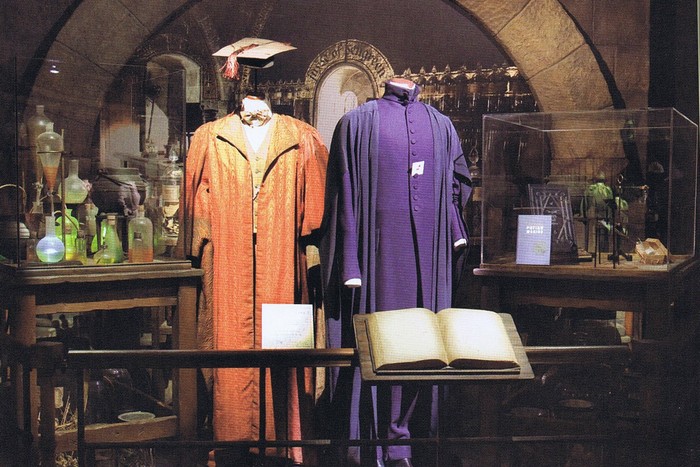 The next room was sealed off after we entered. It was filled with plasma screen TVs all showing various scenes from the many films edited together in that way that highlights all of the really cool and best bits. Sound bites of dialogue and the well known theme song filled the air, and I will unashamedly admit to being genuinely charmed by the experience. I wished my nephews could be there to experience the magic.

A wall opened and there it was, the front lamp lit and emerging from a cloud of steam and smoke in darkness, the Hogwarts Express. Walking into the dark room, surrounded by fog, was a great way to bring people into the actual exhibit.  Once my boyfriend and I had exchanged knowing glances, we moved past the noir smoke and into rooms filled with what are the “ruby slippers” for this generation.

Once you walked past the moving photos and the giant moving and singing “Fat Lady” painting that guards the Gryffindor common room (as played by a true goddess of comedy, Dawn French), there was everything you would want to see. From Harry, Ron and Hermione’s formal school and casual clothes, Harry’s glasses, Neville’s Mimbulus Mimbletonia, Hemione’s collection of school books including Bathilda Bagshot’s A History of Magic, and even the box of chocolates containing love potion as gifted to Harry by Romilda Vane.  Of course EVERYONE’S wand is there, including, much to my amusement Ron’s busted wand precariously held together by Spello-Tape. Ron and Harry’s four post beds were beautiful; the carvings really don’t come across in the films. Stand out items for me were the Marauder’s Map (VERY intricate in person), a copy of The Quibbler, the list of D.A. (Dumbledore’s Army) members, Ron’s howler, and the already extremely nostalgic first letter from Hogwarts addressed to Mr. H. Potter. 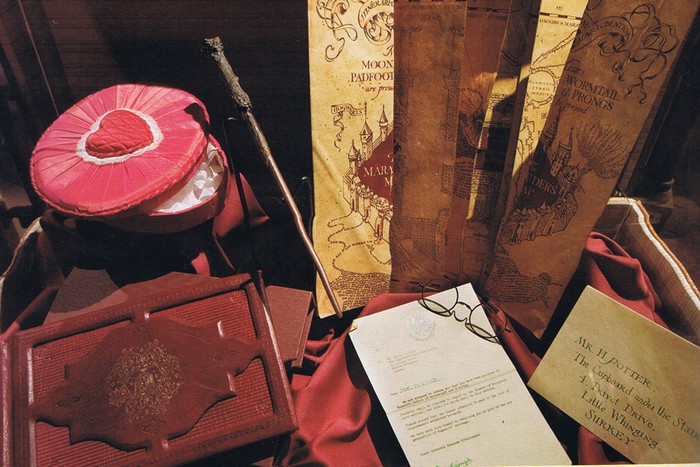 The teachers were represented as well, of course. If for no other reason, go to see this show for the detail on the costumes. The velvets and embroidery were AMAZING and completely lost in the quick cuts of the various films.  I must particularly note the many flamboyant costumes of Gilderoy Lockhart. I never really noticed the detail of his alligator Cuban heeled shoes. Nor had I noticed Lucius Malfoy’s many snake headed buckles and accents (outside of the obvious walking stick and cloak clasp). There was Trelawney’s Stevie Nicks-esque attire, Umbridge’s nauseating Pepto-bismol couture, McGonagall and Dumbledore’s Yule Ball robes, Professor Slughorn’s ornate costuming and Madam Hooch’s dress robes. There were even Professor Sprout’s dirt covered greenhouse clothes, complete with earmuffs and dragon hide gloves for harvesting Mandrake root. Directly next to this was a “greenhouse” where you could harvest your own Mandrake root for re-potting, complete with ear piercing cries – very cute.

While the beauty of these garments was overwhelming, there was really only one, plain robe I couldn’t leave without seeing, Snape’s signature high button black, bat-wing like cloak. The added bonus of the Half-Blood Prince’s potions book, filled with handwritten narrow angular scrawl and recipe revisions was just plain gravy.

There was a room of Quidditch artifacts and Quidditch World Cup Memorabilia complete with event programs (who knew Pumpkin Juice was a major sponsor?), team uniforms for anyone who has played the game on-screen (including Viktor Krum, Oliver Wood and Draco Malfoy). Another interactive play area had Quaffles and hoops, sans Keeper. Apparently I would make a half-way decent Chaser. 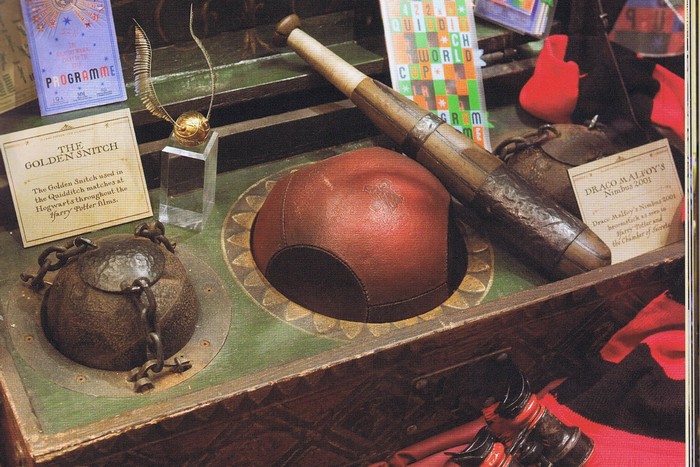 Hagrid’s Hut had Norbert’s egg, desperately trying to hatch, and an oversized chair so you could get the feeling of appropriate smallness in a half-giant’s, company. Although, at my Lilliputian height of 5 feet tall, I didn’t need any special chair.  My daily life feels like a romp in Hagrid’s house.

The room of dark wizard items was just awesome. There was the Angel of Death tomb statue from the pivotal graveyard scene (which now also makes Twilight fans weepy). There was a Dementor hovering in the corner. Maybe it was my imagination but the room felt colder on that side.

Death Eater masks and hoods lined the walls, and both Bellatrix’s Azkaban prison garb as well as her lacey, bodice dress were in attendance. Lord Voldemort’s “resurrection robe,” stood eerily in billowing ghost-like wisps. It was the focal point in the back of the room.  Even a creepy life like Kreature stood nearby, awaiting orders and sneering.

In the center of the room was another of the stand-out collections, the horcruxes. Riddle’s diary, oozing ink with Basilisk fang, the locket and most importantly….SPOILER ALET…..Helga Hufflepuff’s cup! How cool is that? The second part of the movie isn’t even out yet and the cup is on display. It is smaller than I thought (not quite “the cup of a carpenter” small, but getting there) and has on it the signature Hufflepuff badger mascot.

When I excitedly pointed out this detail to my now “humoring me” boyfriend, I had the sudden realization of how I could make him care. “Hufflepuffs don’t care”, I said “Hufflepuffs don’t give a shit!” Not only did this humor him immensely, but I accidentally gained new respect for Hufflepuffs. Maybe getting sorted there wouldn’t have been so bad after all. I mean, following this through to its logical badger behavior conclusion, it would mean that Hufflepuffs eat Slytherins. 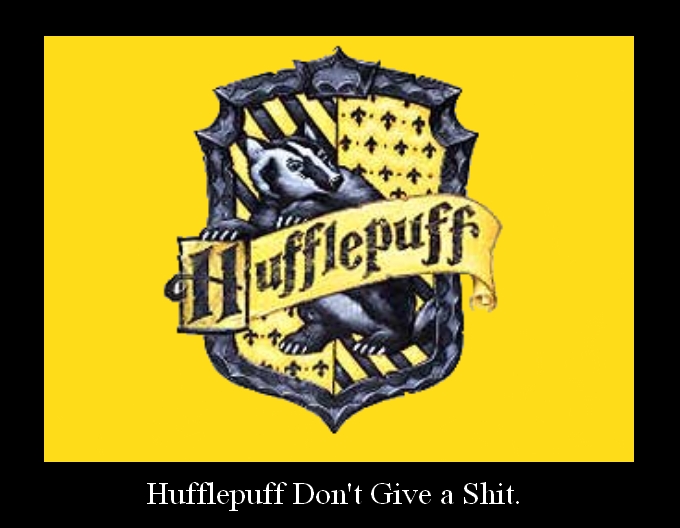 There is so much more, from a petrified Colin Creevey, to Weasley candies, sympathetic Dobby, Fawkes, floating candles in the Great Hall, and the Sword of Gryffindor (honestly, it could have been bigger…I’m guessing Godric also had a Porsche, if you get my meaning).

I could go on and on and on. It is a must see show for any Potter fan, or fan of fantasy film. The show immerses attendees in the world of Harry Potter. The only real criticism I can give is that I wish there had been more interactive sections, and that attendees could take photos inside of the show (I understand why, but getting a picture of yourself harvesting a Mandrak would be damn cool).