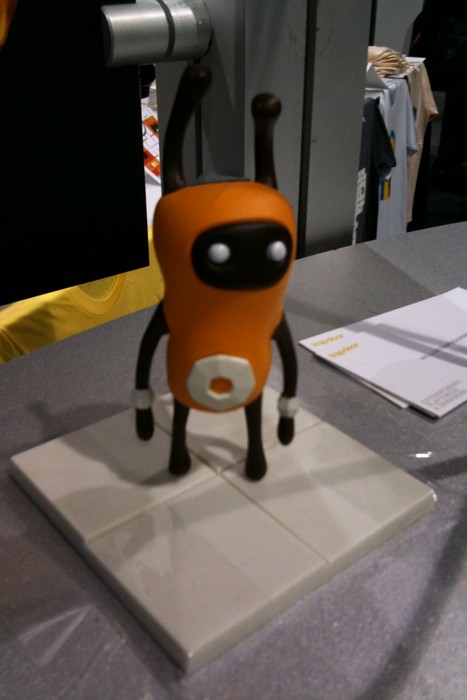 PAX East was full of some amazing smaller studios that garnered most of Team Unwinnable’s attention. The up and coming studios and designers, whose passion for gaming and love of design really burned bright and really blew us away.

We kept returning to the same booths each day. Trapdoor Inc. was no exception. We were being annoying by evidence of how many times we visited this company’s booth. I’m serious.  Everyday multiple times we would stroll by, wave and say hi, possibly apologize for our persistence, but they were cool with it. We think…

One game we particularly enjoyed( multiple times) was WARP. Coming out this year, it is a game where the player is a cute little alien named Warp who has been captured by the United States Government. You wake up in a laboratory and your main goal is to simply escape. To where, you ask? They wouldn’t give us the details on that so we have to wait till its release to find out more.

Art director Thierry Doizon spoke to me about the game and explained that although a simple plot, it proves more and more difficult as you go along in the game to where you have to think quicker and plan out your warp moves as to not die, since the game features a one hit kill.

One aspect we enjoyed to an extent is your ability to warp into people and explode them! Which leaves a beautiful blood spattered spray over everything.

Granted this power is your main source of travel throughout the demo that we played, traversing rooms and exploding bodies. It also proves great for hiding to avoid security or waiting for the right moment to detonate that hiding spot causing mass destruction and a bloody mess strewn across what was once a sterile laboratory.

The polish on this game is fantastic. The character animations are sharp and sometimes humorous, especially when scientists run and cry in corners. The level design is clear and easy to understand and the controls are simple enough that you can pick it up and just go. Navigation is simple, thanks to a great bird’s eye view camera.

One thing I look for in all games is the all around package, I am a huge fan of good design and with that comes not only how the game plays but how every detail looks. From the title screen to transitions between menus and pause screens, I know I’m a bit obsessive. Warp has the total package its menu system is beautiful and clever, the loading screen is clean and not black with a spinning icon in the bottom corner, and the game looks amazing. We here at Unwinnable look anxiously to when this game is released and want to thank everyone at Trapdoor Inc. for putting up with us!

Check out the videos below of Unwinnable’s coverage of Warp by Trapdoor Inc. and EA.

(Please Excuse the sound, it was very loud and there was a crowd… that wasn’t meant to rhyme.)

All In – Batman: Arkham City Trailer