“We got exactly what we deserved. We hooked everything up to a dying mule.  Built a world economy on an obsolete fuel source we knew wouldn’t last. It all came crashing down around our heads faster than any of us could react. That was 10 years ago. You can either be a victim or you can fight back.”

CrimeCraft (CC) is an MMO that is described by its developers (Vogster Entertainment) as a persistent world next-gen shooter or “PWNS.” It was released in August of 2010 to spotty reviews and has, despite the odds, managed to survive among throngs of failed MMOs. CrimeCraft started out as the underdog in a war against another urban-based online shooter called All Points Bulletin (APB). APB was the first to market (June 2010) and the predictions around the web were that APB would swallow CrimeCraft. APB had one of the most advanced character customization tools ever designed for any type of game, period. The customization for CrimeCraft’s characters is still pretty limited. APB allowed you to purchase, upgrade and design vehicles while CC has no vehicular gameplay at all. In almost every category, it appeared that APB was head and shoulders above CrimeCraft.

Despite the apparent edge that APB had from a design standpoint, both games struggled with issues at launch which was reflected in their review scores. Lag, bugs and improper balance plagued the two rivals, but MMOs are known for rocky starts. Patches and hotfixes can usually stop the bleeding if they are treated early enough. Both games also had wonky business models which tried to market the games as hybrids of free-to-play and subscription-based schemes. Players were turned off.

Allegedly, there were some internal struggles going on at Realtime Worlds who developed APB. The development team knew that the pricing methods wouldn’t work, but were powerless to stop them. Ultimately, when the game didn’t do well at launch, Realtime Worlds began to look for a buyer for the franchise. When no one bit, they decided to shut the game down and APB now holds the record for the shortest lived MMOs at 79 days. The general consensus is that while APB had issues, it was more the internal conflicts at Realtime Worlds that ultimately led to its collapse.

CrimeCraft had much to gain and learn from APB’s failure. They quickly changed their business model to a more traditional free-to-play model which instantly gave the game a second wind. On December 4th, 2010, CC’s first expansion, Bleedout, was released. Many of the game’s features were overhauled with Bleedout and a new weekly storyline was introduced. Each episode has a set of missions and features art from various illustrators in the comic book industry. These help set the tone of the Bleedout campaign as players struggle to survive in Sunrise City which was ravaged by the sudden drying up of the world’s oil wells.

I’m a sucker for a good underdog story, but I decided to take to the streets of Sunrise City to see how the game held up firsthand. MMOs are always difficult to review as they require, strangely, massive amounts of time just to get a character to the level cap. Fortunately, I had access to an account that had characters of various levels on it. I began with a new character so I could learn the ropes and get acquainted with the newbie experience. I’ve chronicled my experiences as a level 1 urban adventurer, which will be featured in an upcoming Gaming in the Raw episode. Eventually, I swapped to one of the high level characters so I could experience the storylines of the Bleedout expansion. 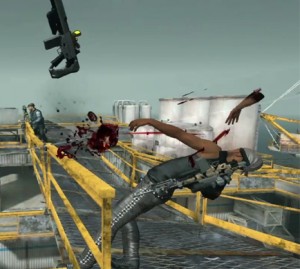 I was disappointed to discover that CrimeCraft does not feature open world gameplay. My very first quest had me trying to secure Sunrise City’s perimeter by killing twelve squatters that had moved in.  However, upon accepting the quest, I was transported to an instance to complete my objective and when my mission was completed I was ported right back. While this certainly gets you to the action quicker, it doesn’t immerse you into the game world and give you a sense of where you are. Sunrise City is nothing more than three zones (Downtown, Midtown and Oceanfront) that act as hubs for accessing vendors, picking up new quests or queuing up for pvp battles and missions. While the areas are nicely detailed, they function as a lobby where you wait for your next battle or mission to begin. Likewise, the NPCs stand around waiting for you to approach them and real-life advertisements bombard you from a myriad of billboards. You can see other players wandering around, but you can’t battle rival gangs or do anything interesting during this downtime. All the real action takes place within instances, which have a pre-determined limit to the number of participants.

Once inside an instance, CrimeCraft isn’t half bad. The combat controls are responsive and you have a variety of weapons and skills at your disposal. For an MMO, it’s not a bad shooter. I often say that a game’s fun factor can override its flaws and the missions in CC are enjoyable enough to keep you playing. However, after several hours that joy begins to wane as you’re repeatedly encountering the same enemies in the same environments. I found myself saying stuff like, “OK, this is the abandoned warehouse again except this time I’m shooting the crew cut guys instead of the dudes in the green jumpsuits.” They try to mix it up a bit by varying the objectives. Some missions will have you collecting items instead of murdering people. Others require you to escort people and protect them.

My biggest gripe about the combat system is that it seems to favor bull rush tactics over tactical and strategic techniques. I obtained a quest where I had to infiltrate a heavily guarded building and snag some hidden recordings. I was elated to have a mission that seemed more about subterfuge than firepower. I methodically slinked through hallways making use of my crouch key and every time I encountered an enemy, I tried to take them out quickly and as silently as I could. It took a while, but I finally made it passed many of the buildings defenses and as I closed in on the hidden recordings . . . BLAM! I was shot and killed before I knew what hit me. So I respawned at the beginning of the map and to my horror all of the enemies I had killed were back. Skulking around was nothing but a waste of time. So I just ran in guns blazing, shot everything that moved, and I was done with the mission in less than five minutes. I was hoping for some Thief: The Dark Project gameplay, but CrimeCraft denied me.

I’m not sure why this game is called CrimeCraft. As far as I can tell, there’s no crime. Sure you get missions to kill people, but some of them are given to you by the police themselves. You’re not robbing stores or murdering innocent people; you’re basically doing what you’re told to do . . . just like everyone else.


When you create your character, you’re given two options: male or female. While you can customize your hair and clothing, the body types for the characters are exactly the same. This means that every female character winds up looking like a hooker and every male is a thug. Perhaps a better name for the game would be Bros and Hos.


While going through the first Bleedout episode I noticed that all of my missions were coming from one guy: Pilot. Pilot is clueless.  He would ask me to do something for him. I would do it and collect my reward from him. I would then immediately get a text message from him saying, “If you have time, come see me. I may have something for you.” Umm, dude? I’m standing right next to you. I just spoke with you a few seconds ago. “Thanks for coming. You weren’t followed, I hope.” Ugh!


The community that plays this game is downright awful. Ask a question in trade chat and be prepared to have your mother berated for the next five minutes.


Jens Pulver (the first UFC lightweight champion) apparently survived the Bleedout and is found everywhere in CrimeCraft. Seriously, he’s like the bouncer at all of the clubs in the game. Go club hopping from Midtown to Oceanfront and Jens is there complete with his Tapout-branded clothing.

Despite my criticisms of the game, there is some silver lining. The fantasy MMO market is oversaturated with titles riddled with elves and dwarves. CrimeCraft boldly breaks that mold and offers a game that will appeal to gamers that prefer a more modern or urban setting. Players who enjoy shooters but want RPG-style character customization can find their fix here. There is also a robust crafting system where players can choose to become tailors, gunsmiths, engineers or chemists. I’m also confident that the adventures in Sunrise City would be exponentially more fun with a group of friends. In a game where gang-related pvp action is encouraged, going solo is probably going to be lackluster in comparison. Finally, it appears that Vogster listens to its fan base and is dedicated to making constant improvements to the game. Just doing cursory internet searches regarding the game’s development reveals the developers’ commitment to the game and accolades from fan regarding how far the game has come.

The next chapter in CrimeCraft’s Cinderella story is about to begin. APB was purchased last fall and will be rereleased as a free-to-play MMO by GamersFirst. The game will be rebranded as APB Reloaded and will go head to head once again with CrimeCraft’s Bleedout. While no release date has been set for APB Reloaded, the closed beta will begin this month. Who will come out on top when APB gets its second life?  I guess we’ll have to wait and see. Until then, I’m going to hang out next to Jens Pulver and send him text messages to come see me.

If you’re chomping at the bit for an episode of Gaming in the Raw featuring CrimeCraft, then follow Richie on Twitter @richieprocopio to find out when it drops!

A Date To Remember Part 1: Fate Is A Cruel Mistress

A Date To Remember Part 2: Schizophrenia Should Not Be Ignored