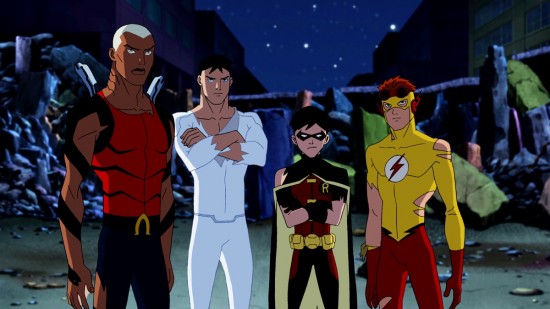 Warner Brothers has been putting out consistently amazing, dare I say ground breaking animation since Batman the Animated Series in the early 90’s. Though they may have had some missteps since they’ve gone to feature length (Green Lantern: First Flight, Superman/Batman: Apocalypse) they have always succeeded above and beyond with their cartoons (Justice League, Teen Titans, Batman: Brave and the Bold).

Young Justice is no exception. Though based on a goofy 90’s series, it’s been re-imagined in a more realistic and cynical “Ultimate” style of the DC Universe. But it works so well because of the level of quality across the board. The voice acting has always been top notch due to Andrea Romano, the design of the characters is fresh but yet iconic, the action is badass and the writing, directing and actual acting by the animation is just as good as it can be. 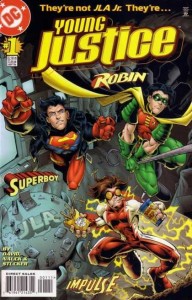 The tone of the show is interesting as it plays up the angsty teenager aspect, a bit of rebellion against the established heroes. With the larger than life, world spanning missions that set the backdrop as to what the Justice League is up to, the more human-level adventures this group of young heroes find themselves in resonates that much more.

Maybe I should take a step back and talk about what Young Justice is. It’s the story of the Justice League’s sidekicks all teaming up, basically what was the Teen Titans from decades ago. Robin, the Boy Wonder, Kid Flash, Aqualad (a new version that’s premiered in the comics recently) and the clone of Superman. Toss into the mix Miss Martian and Green Arrow’s sidekick Speedy as the wild card, and you have a nice selection of a junior Justice League.

The cameos by some of the more obscure members of the JL (Captain Atom, Red Tornado, Zatara) really give the diehard fans what they’re looking for: a sense that this all takes place in continuity, that the entirety of the DC Universe exists all around them, letting us all know that anything goes. We could run into New Gods or the Outsiders or even the Doom Patrol. WB animation has always been great about expanding on the DCU within the cartoon realm. Just the fact that the Question had a huge role in the end of the Justice League Unlimited series was a major geek out moment for me.

As for the actual episodes, the two part premiere sets up everything nicely, even leaving open Speedy’s role in the series as he storms off halfway through and doesn’t return. We visit Cadmus labs, which plays a big role in the Superman mythos. We meet Superboy for the first time and it’s handled superbly, culminating in a non-verbal exchange between he and Superman that is some of the finest subtle body language “acting” I’ve seen in a cartoon. 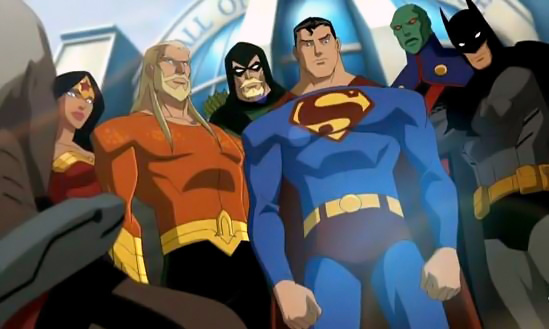 In the third episode we have the team come together in Happy Harbor under the guidance of Red Tornado, headquartered in the 70’s Justice League’s mountain base, much like the Peter David and Todd Nauck comics. Ms. Martian is an odd addition to the team having had her first appearance in the later Geoff Johns Teen Titans series, but I only know of her from the all-ages Tiny Titans comic. There doesn’t seem to be a formula to the episodes, other than maybe have the team in a different set of themed civilian outfits, then change into their gear and mess stuff up (though Robin’s consistent dissection of words, “Underwhelmed, overwhelmed, why can’t anyone just be whelmed?” comes up in each episode and is oddly amusing.)

They really play up the secret agent undercover mission angle, but this militarization of the Justice League is kind of disarming. They’re functioning like a secret society with this benevolent Big Brother aspect, whereas the villains seem to be one-off mischievous ne’er-do-wells. And the awkwardness and frustration between Superboy and Superman is really tense and feels like it has more depth than in your traditional cartoon. The bad attitude is handled with perfect brooding teenager bravado. It doesn’t feel cliché and trite. It’s weird to have so much substance in a 22 minute work of animation.

As the state of the DC Universe in the comics, which in my opinion has gone downhill since Identity Crisis, begins to twist and turn into this amalgamated Marvel spectacle. This is where I see the future for these characters. With a nod to the classic, more mythic feel that I miss from the comics, all of the DCU will be released upon the world in a myriad of formats, escaping beyond the confines of the two-dimensional continuity trappings of periodical weeklies. Children are growing up right now watching quality entertainment of these superheroes that are finally being done justice.

Tune in this Friday, February 11, for the next episode ‘INFILTRATOR’ introducing Artemis.

Kurt Christenson writes comics and is obsessed with cartoons and foreign films. Follow his exploits and adeventures @KurtChristenson

ThunderCats Rebooted: Did We Feel the Magic and Feel the Roar?