I will preface this review by saying that I am completely ignorant of the topical geographies of Finland, Switzerland, Iceland, Norway and even Nova Scotia for that matter. Sure, I could easily go to Wikipedia and learn about them, but I’d rather imagine lands filled with snow, trees, black metal, Vikings and ancient churches that magically respawn since they are constantly being burned down by dudes in corpse paint. It is a land akin to the worlds I visited in my Dungeon & Dragons games. Sure, that is an ignorant view of a nation state, but it is harmoniously in tune with The Troll Hunter (or Trolljegeren in the native Norwegian) and that makes me happy.

Troll Hunter uses a mockumentary style conceit to tell its story and it does so effectively.  This is surprising.

Think about Diary of the Dead and how Romero went from the subtle insights of the previous Dead movies to a forceful hit-you-over-the-head approach. It’s like he’s saying, “HERE’S THE MIRROR,  STARE AT IT! KEEP STARING! SEE, IT’S YOU! YOU ARE THE ZOMBIE! CHANGE THE WORLD NOW! BUY A SOLAR PANEL! EAT IT!”

Yes, I understand, George. I am not a child. 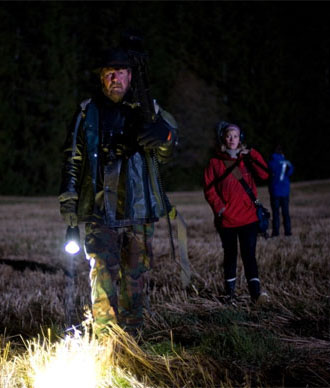 There are layers to every film. Mockumentaries seem to be one of the hardest types of movie to get right. Granted, I never made one, or any other movie for that matter, so I don’t really know – but I can count far more failed documentary style movies (I’m Still Here) than I can good ones ([REC]).

The Troll Hunter is broken up into a series of vignettes and in embracing that structure, it doesn’t get sucked into the common failings of a found footage mockumentary with feature film ambitions. More than anything, it feels like a weird nature show you’d be shown in some anthropology class and then asked to take notes in.

“All right class, open your Monster Manual to page 38.  We will be reading about the three headed Herdibeurgar,” – pronounced with the affectations of the Swedish Chef.

The special effects are straight out of Where the Wild Things Are and the clever use of night vision definitely makes for some excellent scenes. The design of the trolls aren’t so much dark or gothic as they seem to be rooted in traditional images of trolls. This lends a kind of weird historic merit to the film. This is what Norwegians believed, man!

In the end, it’s not the greatest movie, but I don’t give a crap. Watch it!