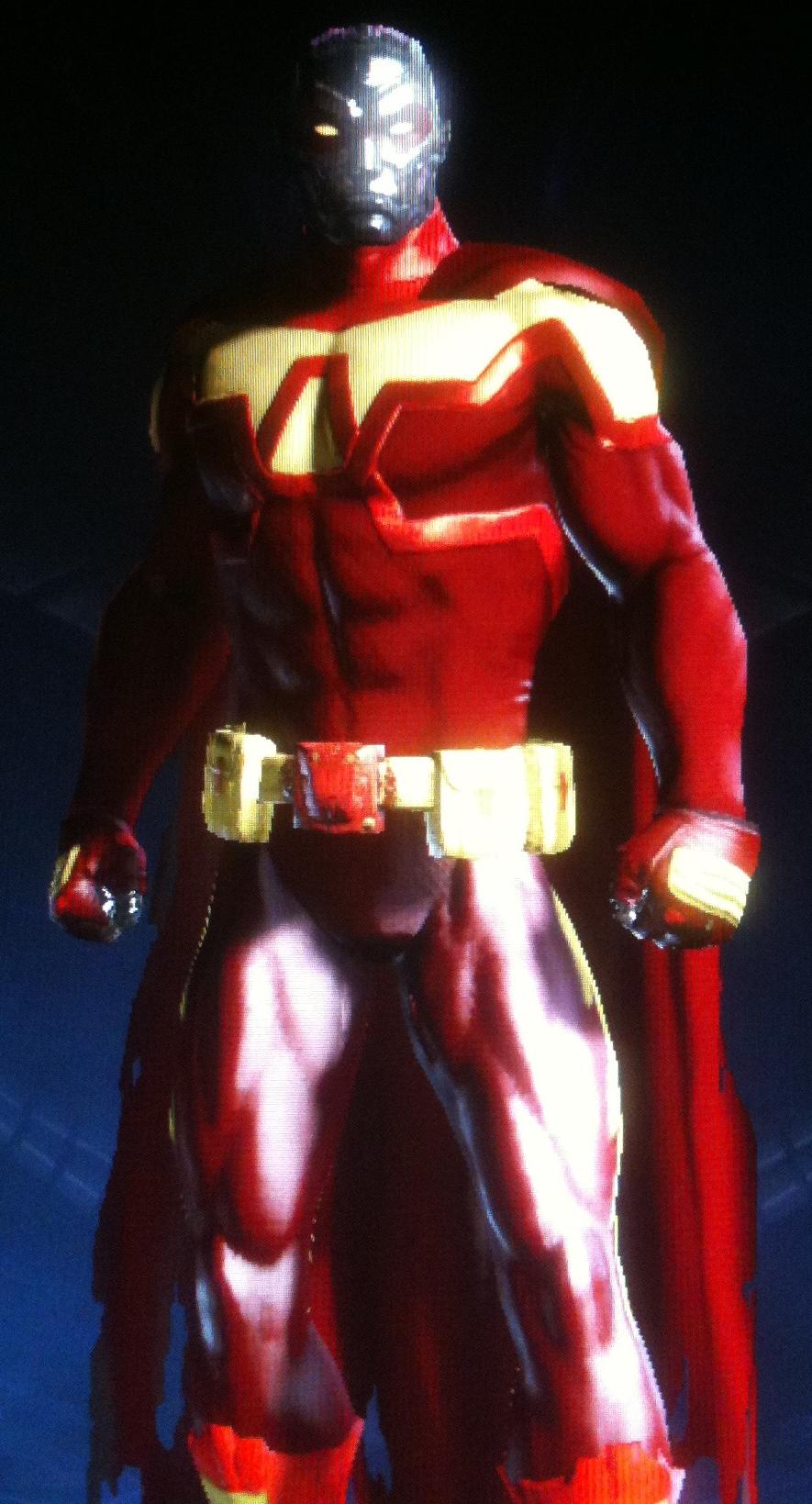 The Secret Origin of Scarlet Steel!

When Future Lex Luthor released his repurposed exobytes into the Earth’s atmosphere, one exobyte slipped into Doctor Bedlam’s secret lab in the sewers of Metropolis.  There, it found a damaged and deactivated Superman robot and began to repair the fallen sentinel of steel.

The exobytes fused into the robot’s system, only able to activate the robot’s super speed, they also reactivated its central programming – protect the people of Earth!

The newly awakened automaton put together a costume from the scraps he found in the abandoned lab.  Upon escape, the robot realized the lab was actually in the bowels of Brainiac’s Harvester Ship, floating above the City of Tomorrow!

Upon contacting the Justice League Information Broker, Oracle, the two hatched a plan to break down Brainiac’s security so Justice League of America could stop the Coluan Terror.  She dubbed him Scarlet Steel.

And so, Scarlet Steel begins his quest to save Earth as The Fastest Automaton… Alive?

Oracle uploads a map of Brainiac’s ship to Scarlet Steel’s CPU and the mercury machine speeds across the Harvest Ship in search of escape.

Unfamiliar with the human Personal Computer hardware and software installed in him, Scarlet Steel has a difficult time controlling his own body.  However, there isn’t time to run a full diagnostic.  Brainiac’s Security Sentries were almost upon him.

Outside, Brainiac was harvesting Metropolis.  Brainiac’s Sentries attacked the city.  Superman, the Justice League of America and the new exobyte super heroes fight the first wave of Brainiac’s invasion force.  Meanwhile, Brainiac’s ship transports anything into the Harvest Ship; cars, soda machines and even newspaper stands disappear from sight! 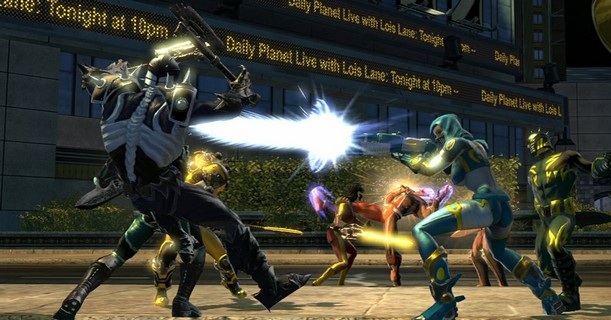 As Scarlet Steel runs through the ship, he Brainiac’s Sentries catch up to him.  The first two appear out of nowhere.  Scarlet Steel dodges energy blasts and smashes the first sentry like a bolt of lightning striking a live transformer! Then, a blast hits him in the small of his back.

In Central City, Forensic Police Scientist Barry Allen feels a disturbance in the Speed Force.  Ducking out of his lab, the scarlet speedster breaks the sound barrier, running straight to Metropolis. 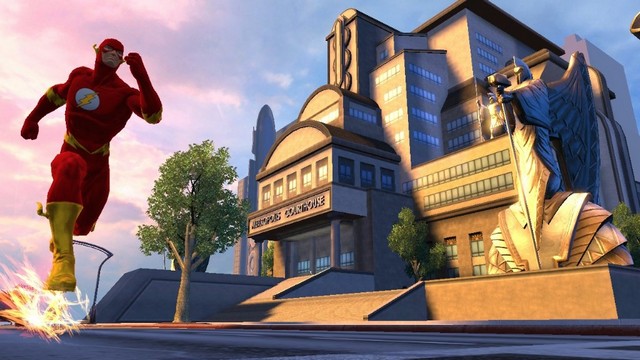 Inside Brainiac’s ship, clapping his hands together at super speed, Scarlet Steel creates a wave that shatters the attacking sentry.  Wounded but still functioning, he powers on through the station.

Meanwhile, inside the Gotham Clocktower, Oracle studies the schematics of Brainiac’s vessel.

“You need to get through the collection station and into the main weapons control station,” she called over the intercom.

“I just have to get through these Sentries first,” thought Scarlet Steel. 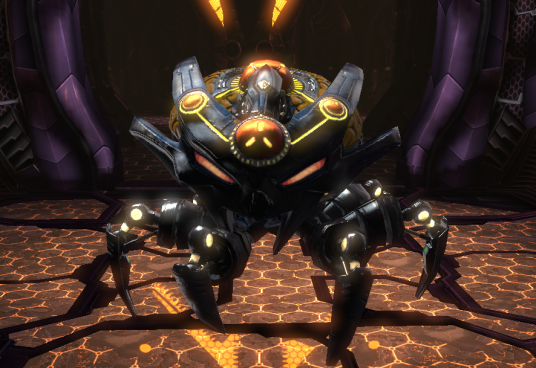 Scarlet Steel charges forward.  The first three Sentries fall in a lightning-fast hale of blows.  Two Sentries sneak behind the sentinel of steel as two swoop to his sides in an attempt to trap the hero.  Scarlet Steel runs pummels the one on his right, runs up the wall, then on the ceiling then down the other wall and crashes through the remaining Sentries.  All that’s left is the Overseer.

Scarlet Steel runs around the Overseer, punching its sides.  Then, he runs to the end of the hall, behind the creature, and charges forward. Just before contact, he reaches out his arms and claps them together, sending a devastating shockwave that shatters the metallic beast into hundreds of shards!

“I hope I don’t have to do that again,” he thought.

“Hey, you need to keep going, more security is on the way,” said Oracle.

Suddenly, he stops in a hallway.

He looks out a window, down at the Harvest Ship’s launch bay.  There are hundreds of Sentries, Overseers and other monstrous killing machines ready to unleash Brainiac’s bloodlust on the people of Metropolis. 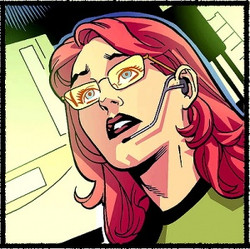 “I see it,” said Oracle.  “We have to stop this ship before they’re ready to launch.”

“I need to get to the weapon’s control room,” he thought.

“If you destroy the ship’s main gun, the Justice League can get in and help you destroy Brainiac’s fleet.”

Scarlet Steel checked his energy reserves.  Eighty percent – That should be enough.

“Must get the League in here.  They stop things like this all the time,” he thought.

The weapons control room has four pylons that hold the Harvest Ship’s main gun in place. Destroy the pylons and the gun falls off the ship.  Then Superman and company can come in and save the day.

The control room is crawling with Sentries, Overseers and something new.  A large humanoid looking robot, floating above the pylons; this must be Brainiac’s Guardian.

“You need to destroy the pylons,” said Oracle. 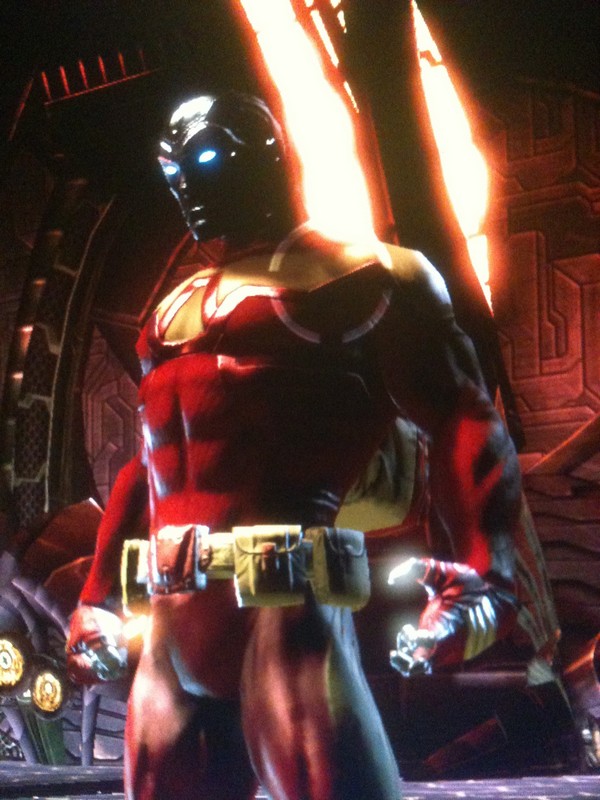 Scarlet Steel races to the first pylon and blasts it with four clasps of thunder.  It falls.

And Overseer and countless Sentries blast Scarlet Steel.  He runs into the fray, punching and kicking as many as he can, then races to the next pylon. 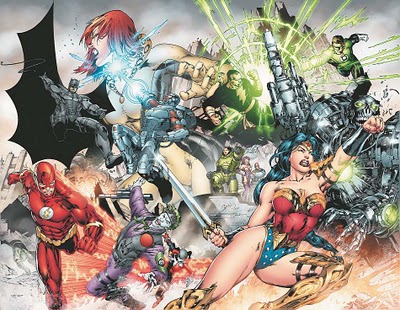 Punching the sides then hitting the pylon with the thunder of the gods, Scarlet Steel destroys the second pylon.

“Systems operating at fifty percent.” The voice was cool, unemotional.

“Fifty percent?  Looks like we have that in common.”

Energy blasts bombard Scarlet Steel, knocking him across the room.  He gets up and races for the third pylon and dispatches it at super speed.  He doesn’t even hear the computer activate Brainiac’s Guardian.  Scarlet Steel runs to the fourth pylon.

“This is a job for Superman,” he thought.

Tapping into the Speed Force itself, Scarlet Steel unleashes a fury unheard of, especially from a robot.  As the pylon falls, the Guardian flies into Scarlet, hurling him into a wall. 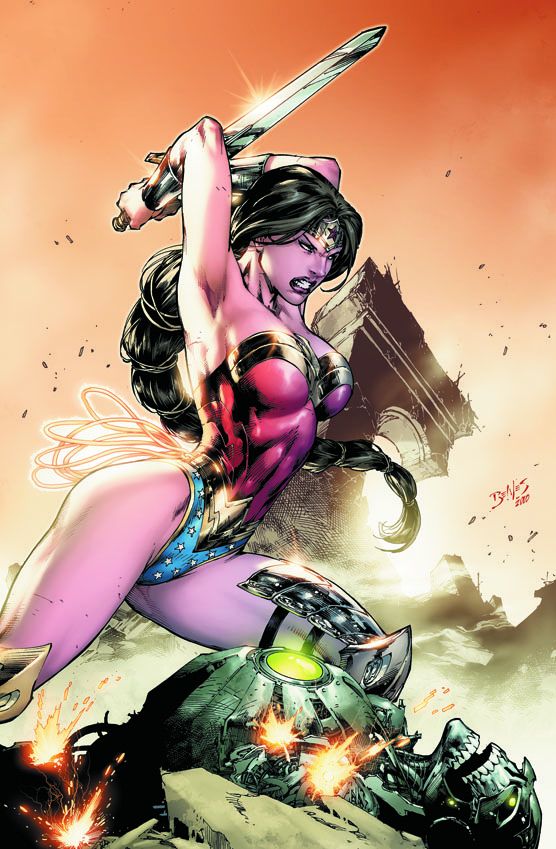 rom the ship.  Scarlet Steel has succeeded.  He charges at the Guardian.  Twenty Percent, more than enough to take on this hunk of scrap.

The Guardian teleports away as Scarlet runs into the wall.

Scarlet Steel, still unfamiliar with the basic commands of the human Personal Computing command system implanted in his Kryptonian CPU, could not reach into his makeshift utility belt and grab a Soder Cola.  Thus, he was unable to recharge his circuits.

The Brainiac Guardian teleports behind the neophyte hero and barrages him with countless energy blasts.

Scarlet Steel falls to the ground as Brainiac’s Guardian floats above him, victorious.

Instantly, the Flash felt Scarlet Steel slip into the Speed Force.  With Scarlet’s noble sacrifice, the Justice League of America and the newborn heroes will save the day.  Perhaps a protégé of Superman will have better luck against the Coluan Overseer’s hordes…

Ian is currently coming up with a new DC Universe Online character that won’t fall to the forces of evil so easily. In the meantime, feel free to follow him on Twitter (@IanGonzales). He promises not to gloat about scoring Yann Tiersen tickets.

The American Culture of Horror: Isolation and the Loss of Self