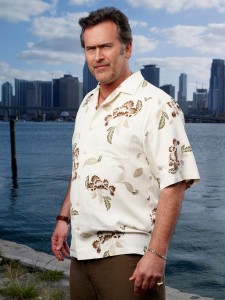 In November of 2010, the USA network announced that they were going to make a prequel movie to accompany their hit series Burn Notice in the spring of 2011.  I am a fan of the show, well mostly I’m a fan of any show that has to do with spies, explosions or yogurt, but the thing that really sparked my interest about this movie was that it would focus on the character Sam Axe, who is portrayed by Bruce Campbell.

I was overcome by a sense of pride.  It felt like all of the years I have been rooting for the underdog of actors and now the mainstream finally seems to have taken a liking to him, too. He has been a member of the cast since the show’s inception and the character he plays exudes all of the characteristics that make any of Campbell’s characters memorable. He is charismatic and charming but always with that evil twinkle in the eye that begs the question, “What’s he really up to?”  Campbell’s characters radiate a smarminess that is rather unique to his work. This makes him a great character actor and it is always nice to see someone do well – that is if you like the person. Bruce Campbell captured my heart with the Evil Dead films and I have been rooting for him (well, for his career) ever since. Thinking about this prompted me to compile a list of reasons why Bruce Campbell is awesome.

#5 He writes books which are funny and self deprecating.  They are also strangely informative. In his book If Chins Could Kill, he gave up the fake blood recipe that they used in Evil Dead. Thank you, Bruce, for some great (and certainly offensive) Halloween costumes (not to mention all of my stained clothing).

#4 He doesn’t take himself too seriously. I mean, the man was in an Old Spice commercial and made a movie called The Man With the Screaming Brain.

#3 He is super approachable and will talk to you about anything. Once Charles Moran inquired of Mr. Campbell about his feelings on hot dogs at a book signing which prompted a conversation about baseball games.  The entire Q&A was full of odd and eccentric questions which were answered in a light and humorous way. He really knows how to work his audience. 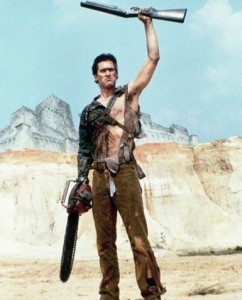 #2 He made it cool for dudes to use the word “groovy!” Basically what I am talking about is with enough charisma and confidence you can say whatever you like.

And the #1 reason I think Bruce Campbell is awesome….

Bruce Campbell taught many of the men of my generation how to be a dude! “You see this, this is my boomstick!” or “First you wanna kill me, now you wanna kiss me. Blow.”  Enough said. He taught them how to be a bit more…sleazy. I mean that in a good way. Not all girls want a clingy John Cusack at their window blasting Peter Gabriel after being repeatedly asked to go away.

And for that I thank you, Mr. Campbell!