Since its debut ten years ago, The Sims franchise has made approximately $8.7 gazillion for Electronic Arts — and yet I haven’t seen a single solitary penny of it.

Which is strange, considering I invented the game.

Looking closely, you’ll notice my name cannot be found on the packaging or in the credits, nor is there a thinly veiled avatar based on me, or even in-game modifications that will make your Sim’s living space look exactly like my apartment.

That’s because I invented The Sims sometime around 1989, back before my creativity was completely sucked dry, when I still had the youthful energy and the endless free time to develop my own ideas. Unfortunately, in my ignorance, I only shared my idea for The Sims once — in, and I freakin’ kid you not, a letter to Electronic Arts.

Do I wish I still had a copy of that letter? Damn right I do. If I could go back and advise my younger self, I’d send a second copy to the patent office and have a third notarized and filed with a copyright lawyer.

As it stands, the letter, in which I lay out a seed of a game concept that would later be replicated almost to the very last word, is lost to history (though I like to think some EA exec has it tucked away in an anonymous safety deposit box somewhere halfway across the world).

In order to illustrate just how blatantly I was ripped off, I’ve asked my mom, an elementary school teacher, to have one of her students make an adorable attempt to recreate my letter to EA. I realize this simulated letter has no legal merit whatsoever, nor does it serve any other purpose than to stroke my ego and entertain Unwinnable readers. Still, I believe it is appropriate in that it captures an essential truth. Sort of in the same way The Sims captures an essential truth about modern living. 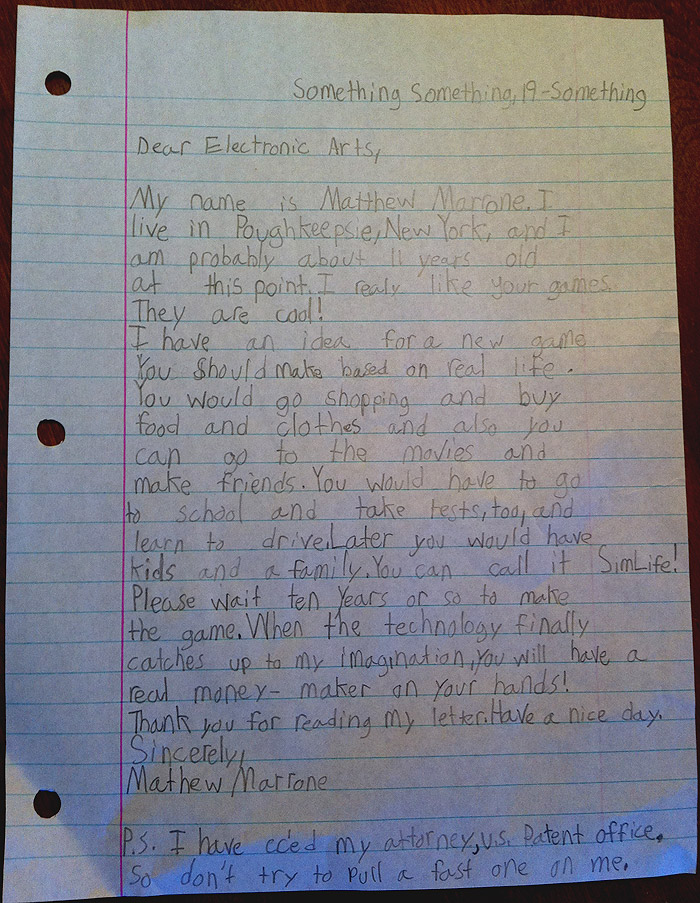 So, you might ask, how do I know Electronic Arts even got my letter? Because I instantly became EA’s best friend, receiving a ton of promotional material in the mail within a few short weeks.

While this is clearly an outrage, I assure you I’m not bitter. I write this now not to make any financial demands of EA or to embarrass anyone. All I want is my story to be told.

If for no other reason than my long-lost creativity can finally rest in peace.

Matt Marrone should be a millionaire, not a journalist, because, seriously, he wrote that f-ing letter. I know you think he’s joking but he really did. You can follow him on Twitter @thebigm.

Not Everything is For Me, and That’s Okay
Previous Post

My Xbox; My Bathroom – Places to Get Things Out