I picked up Rivet Wars off a clearance sale because I thought the little steampunk walker tanks looked fun – also, there were guys who drove around in giant wheels! That said, I’m not really a World War guy, and I never really played the thing, because I had too many other one-on-one skirmish games vying for my attention.

By the time this article goes live, a Kickstarter will be underway for a new edition of the game, from Steamforged, this time, rather than CMON. While the Kickstarter promises an “updated game engine” with “new ways to play,” not to mention a “brand new faction” and “refined miniatures,” maybe this will give you some idea of whether you want to back it or not. 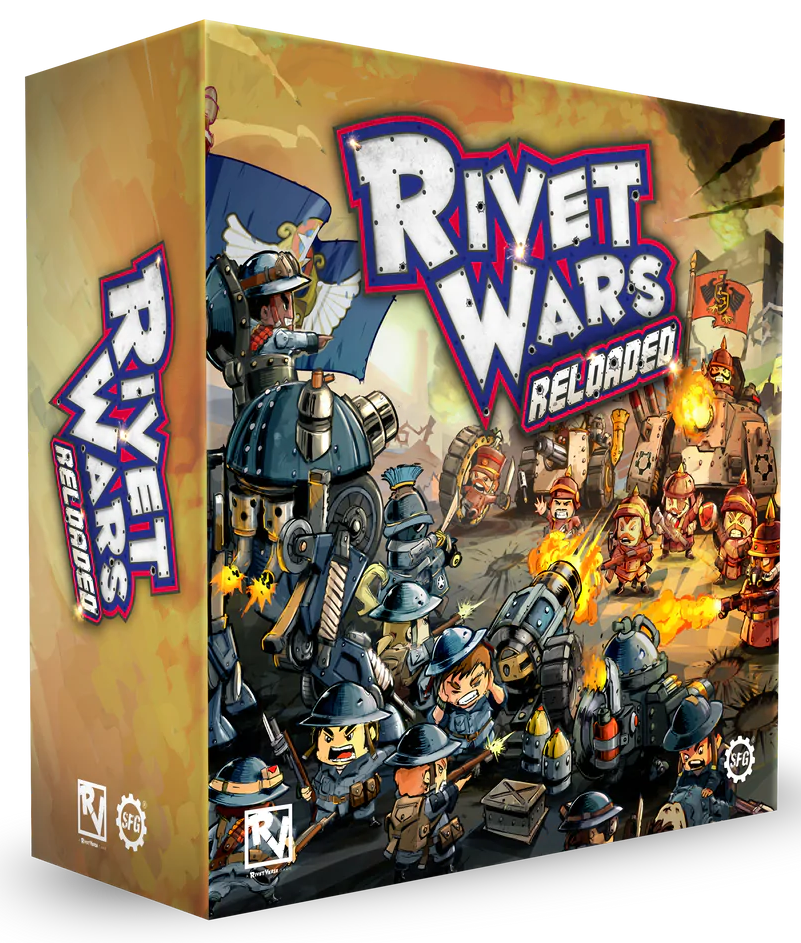 Rivet Wars takes place in an imaginary world (called Rivet) during a version of the first World War where, to quote the rulebook, “technology has stagnated to a post-industrial level.” Which is to say, this is a steampunk setting with walking tanks. That’s the big selling point here.

The fictional world of Rivet bears, in some ways, a very close resemblance to the real-world conflicts of the World Wars. There’s even a nation called “Normandy.” The two factions presented in the core box (called “Eastern Front”) are the forces of the Blightun Empire, or the Blight, and the Independent Allied States, or the Allies. No bones are made about which ones are the good guys and which the bad: the Blight is “a monarchy driven by the Mad Archduke and his uncle, the Kaiser” which rules through “fear and brutality,” while the Allies simply “struggle to maintain their independence.”

Later expansions add in other factions, not to mention planes, more tanks, and what appear to be purple aliens? I don’t have any experience with those, though. In this core box, the two factions are led by analogues of Patton (General G. Patston) and Rommel (General E. Rommler), even though the aesthetics are a lot more World War I than II.

The game is played on large, square tiles that are arranged according to missions specified in the rulebook. In this way, it resembles any number of other skirmish and dungeon crawl games, especially those manufactured by CMON, which often use these similar tile sets. The art on the tiles is pretty much all war-torn desert landscape (hence that “Eastern Front” designation, I guess) pocked with craters and riddled with trenches and foxholes.

As these sorts of games go, it’s surprisingly simple, and much of the rulebook (which is filled with big, easy-to-read text) is taken up with the missions themselves, alongside in-universe excerpts from imaginary war manuals and this, which is apparently from a letter home found on the body of “Pvt. Ray Bunty”:

“Mama, I’ve seen things you people wouldn’t believe. Sturmpanzers on fire off the cliffs of Brighton. I’ve watched Monowheels skitter in the dark near O’Ryan’s Gate. All those moments will be lost in time, like rivets in a hot forge. Time to go over the top.”

Rivet Wars is a silly game, is what I’m telling you. But again, it’s also surprisingly easy to learn. Each turn, you gain deployment points that let you put out troops. These take the form of everything from infantry to cavalry to those walking tanks we mentioned. They all have their own strengths and weaknesses, and their own special rules, denoted by both stat cards and also a handy dashboard that shows the stats of all your available troops in one place.

You also have action cards and secret mission cards that let you perform special maneuvers or pick up extra victory points. Other than that, you pretty much spend each turn fighting then moving (reversing the usual order of games like this) and then repeat the process, trying to score whatever the victory conditions of your particular mission might be. Shots target an entire square of the map, rather than an individual unit, and are then distributed within that square based on a grid. And you just keep at that until one side wins the day.

The miniatures are one of the primary selling points of a game like Rivet Wars – certainly, the walking tanks and monowheels are what made me pick it up. Done in a chibi art style, as is popular with many CMON games, the specific design of Rivet Wars is unusual, more reminiscent of Playmobil or the old Fisher-Price Little People toys than the anime or Funko Pop-influenced designs of, say, Marvel United. There are even legless “plugs” that can be fitted into tanks and the like that look almost exactly like the Little People toys.

Whether or not that works for you will depend on your own personal aesthetic tastes – it’s not really my own cup of tea on the people, but it works like gangbusters on the walking tanks – but it’s a big part of the flavor of the game, and it doesn’t look like that’s going to change at all in this newly-launched Kickstarter edition. (Also, I must confess that the heavily-armored troops look like walking cans, which is a delight.)

Only Trust Your Fists: The Side-Scrolling Beat-‘em-Up Vibes of Streets of Steel