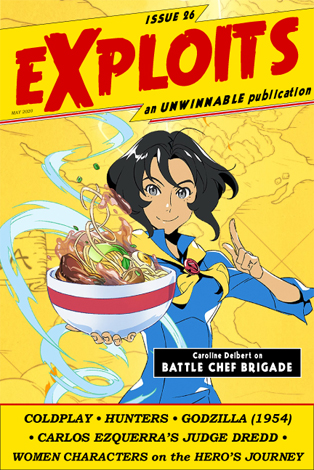 This is a reprint of a feature story from Issue #26 of Exploits, our collaborative cultural diary in magazine form. If you like what you see, buy it now for $2, or subscribe to never miss an issue (note: Exploits is always free for subscribers of Unwinnable Monthly).

I discovered Godzilla, the original 1954 Toho Production directed by Ishir? Honda, in the midst of this seemingly endless period of self-isolation. The film depicts a national disaster that doesn’t just mirror the nuclear attacks on Japan in 1945 but explores how citizens live their lives throughout a crisis – a feeling I’m growing all too familiar with.

The film spends an extensive amount of screen time with the citizens of Odo Island. Godzilla takes time to show the panicking mobs of citizens, the parents and the children, the broken people who have lived with a decade of paranoia. And now their worst fear is coming true. The hidden psychological impact of years of decline come to the surface in a world suddenly upended by a crisis that we should have seen coming – but everyone whose job it was to save us has turned a blind eye.

The way Godzilla depicts the government’s commitment to diplomatic relations and economic well-being over public health is surreal. In a public forum a representative urges the Chairman to keep newly discovered information on Godzilla from reaching the public. “If we announce this too rashly the public will panic,” he says, “Our political life, economy and foreign relations will be plunged into chaos.”

It is an eerie statement. It is not hard to imagine just how many conversations went exactly that way behind closed doors across nations worldwide in January and February of this year. The scene served as a reminder that, in the midst of disaster, the material reality of people’s lives too often come in second to societal constructs like “the economy” and “political life.” Panic is bad press and no one wants bad press, especially not in the end times.

But even amid the extraordinary circumstances of Godzilla, the characters must still navigate the mundanity of their lives. Our heroes Emiko and Ogata struggle with asking Emiko’s father, the scientist Dr. Yamane, for his permission to let them marry. They know they might not make it to that day, but they’ve wanted this so badly for so long. I was struck by that commitment to normalcy. In these uncertain times, we still have to live our lives, as impossible as it can feel to do so. Consciously and subconsciously, the search for normalcy continues, even if the shape of reality as we used to know it is a thing of the past.