Baptism is a short, emotionally removed kinetic visual novel about the horrors of unchecked psychosis (and our own fascination with them).

Baptism follows the lives of a young, formerly wealthy couple who married and had children far too young, along with their young son and daughter.  From the outset you’re led to believe that there’s a problem with the son; women in the mother’s family either don’t conceive boys or don’t see their sons live to adulthood.  As a result, she tries to restrain any affection or attachment she might harbor towards the boy, who is destined “not to survive a baptism.”  The father carries his own issues as well, judging by his choice to largely spend the child’s birth night in the hospital’s chapel.  It’s all downhill from here, destined to end on a stormy, bloody night.

Overall, the horror aspect of Baptism was well executed but not revolutionary.  As you probably guessed from my description of the parents above, a lot of the horror in the story stems from religious psychosis and superstition guiding the parents’ actions in their lives within the confines of a small, isolated town.  The boy isn’t baptized even after he’s old enough to enter school, whereas his sister is baptized while still young enough to be swaddled, for example. None of the main cast seem to have any sort of meaningful relationship with their each other; the boy fears his sister is cursed because she was born with severe facial deformities, his father believes the boy is the cause of the family’s hardships simply by existing, and the mother is largely unable to do anything to manage or comfort her ostensible family.  This is definitely a narrative about a nuclear family destroyed by a toxic belief system, which has been done time and again. What I liked about Baptism was the manner in which this story was framed.

Everything is told from the perspective of an omniscient narrator, detached and bluntly informative as the stories and motives behind each character’s actions unravel.  The sprites are grey and plainly dressed, bearing strange symbols instead of faces, preventing you from seeing the emotional state of the family members, or any performative expression via their wardrobe.  You can acknowledge these individuals as people, but you don’t feel any sort of closeness or attachment to them beyond what you might possess for a total stranger sitting across from you at a coffee shop.

The backgrounds are all black-and-white photographs, and more often than not the pictures themselves don’t match up with the description of the rooms you’re reading on the screen.  This isn’t an uncommon choice in visual novels, particularly when the creators might not have the time or resources to draw out backgrounds or simply prefer pictures.  However, significant discrepancies between what is being described and what I’m actually seeing tend to break the immersion of the story, and normally that would be a major point of criticism for me.  But weirdly enough, the disconnect between the actual images and their descriptions worked here because of the afore-mentioned detached narrator. The whole story doesn’t feel like a tragedy I’m actively watching play out, but rather a long-ago crime that the lead detective is reviewing years after the fact, once the faces of the persons involved have faded from memory and the various locations of interest have been renovated or remodeled. 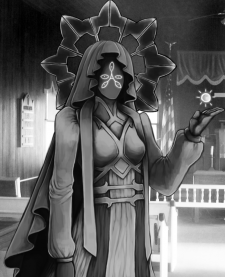 Baptism doesn’t necessarily function as a horror story, really, even though that’s definitely the genre it’s situated within.  Rather, the visual novel brings to mind modern true crime series and their makeup. We don’t really get attached to the families or victims we see on Forensic Files, do we?  We just want enough background to know that the victim didn’t deserve whatever tragedy befell them, and that the perpetrator had something broken in them (excessive greed, psychopathy, etc) which allowed this crime to occur in the first place.  We don’t want to get swept up into the world these people lived in; a few photographs of the crime scene and a handful of additional locations will do, just to give us a better picture of the horror and tragedy that actually caught our attention.  Little is discussed of what happens to the family after the climax of Baptism, beyond a mention that the wife eventually divorced her husband.  It makes perfect sense when you think about it; we’re only interested in this family because something terrible happened to them.  Why should we continue to follow their story once the mundane settles upon them again?

There’s an old adage about a train making it to the station not being news, but a train that fails to reach their destination is.  We’re drawn to deaths and disasters, particularly when they happen to perfectly ordinary people or befall their victims with no lead-up.  The family in Baptism is largely broken but ordinary; for example, nothing suggests that the early deaths of boys in the mother’s family have actually been caused by supernatural forces, as opposed to genetic disorders like ALD.  Their house is normal, their community ordinary, and the son is utterly unremarkable as a person. Neither the narrator (nor you, through their recollection) are given any reason to care about the people themselves; only the terrible things which happen to them.

Baptism is not a story designed to tug at your heartstrings or knot up your stomach in disgust after enticing you to care about these four individuals.  Rather, this VN is a near-clinical presentation of the events leading up to a night that destroyed a family, divorced from any extraneous parts of their lives, personalities, or basic emotions.  You are not necessarily expected to mourn their loss, or even offer up any kind of emotional investment. Your job in Baptism, then, is simply to bear witness to this crime which you have no power to stop, and then move on.

Baptism is available on Steam, and for two bucks you could do a lot worse.  If a fictional horror VN stylized like a true crime narrative piques your interest, go for it.