Apparently, Starship Troopers is Takashi Miike’s favorite film. So says Tom Mes in the booklet accompanying the Arrow Video Blu-ray of Terraformars*. It would be an endearing factoid, even if it weren’t a relevant one – fortunately, in this case, it’s both.

Mes goes on to extensively claim that “Terraformars is Miike’s Starship Troopers,” by which he means that “it is very much a Miike version of Starship Troopers: it is equally spectacular and silly, and populated with characters that will never quite succeed at becoming the heroes that the conventions of the genre (and the expectations of the audience) normally want them to be.”

Of course, Miike has never seemed one to place much stock in audience expectations. In fact, his films are rather notorious for flouting, confounding and subverting them, going back at least as far as 1999’s Audition, the movie that catapulted him to international fame, even though he already more than two-dozen directing credits under his belt by then.

Thanks to Audition and some of the other films that followed it such as Visitor Q, Ichi the Killer and Gozu, Miike’s name became synonymous, at least in the United States, with a certain strain of transgressive and ultraviolent cinema. In fact, when he was invited to contribute an episode to the Showtime series Masters of Horror – which billed itself as a venue for allowing directors complete creative freedom – his contribution, “Imprint,” was deemed “too disturbing” to show, though it was later released as part of the series on DVD.

For all that, however, Miike’s extensive filmography includes plenty of mainstream movies, too, even if a mainstream Takashi Miike movie is often still pretty bizarre. Take, for instance, his ostensibly family-friendly 2005 film The Great Yokai War, in which mung beans play an integral part in saving the day.

When your filmography features more than 100 directing credits in just over 25 years, they can’t all be winners, and a cursory glance at the ratings of Terraformars on Letterboxd show that it might be considered one of those inevitable duds. In the making-of documentary that accompanies the Blu-ray, Miike himself (I think) says of the film, “It’s fine as long as it’s fun.”

So, is it fun? Sure, most of the time. It is certainly ambitious and bonkers, with plenty of really on-the-nose nods to other American sci-fi films, not just Starship Troopers. The look of Tokyo in 2597, when the film begins, owes an obvious debt to the cyberpunk future of Blade Runner. And in case it isn’t obvious enough on its own, a flying car that is basically a total lift of a spinner shows up in short order to drive the similarity home. By the time the characters in Terraformars pick up the film’s MacGuffin in the form of a giant egg, no one should be shocked that it looks exactly like one of the eggs in Alien.

Of course, this is Takashi Miike, so there’s bound to be at least a few people who claim that Terraformars is more than merely fun. Tom Mes makes a pretty good case for this in the booklet, arguing that Terraformars intentionally lampoons the Japanese tokusatsu genre in much the same way that Starship Troopers skewers Western military SF.

Certainly, the conventions of countless tokusatsu shows are present here. The cast of characters, who are sent to Mars to fight giant, humanoid cockroaches – more on that in a minute – have been genetically modified with abilities taken from terrestrial bugs. When they inject themselves with “cell activators,” they turn into rubber-suited human-bug hybrids that could have come out of just about any sentai TV series, even if their powers (which include one guy turning into a literal jet engine by spewing fire from his mouth) are sometimes more bizarre. A couple of the characters even go Super Saiyan in the film’s final reel by injecting themselves multiple times. Naturally, this makes their hair get spikier, among other things.

But this is also still a Takashi Miike movie, so none of the characters are as effortlessly heroic as they probably would be in the hands of another filmmaker. As Mes puts it in the booklet, “Miike, after all, is an artist of the imperfect; of the dropouts and outcasts; of lives lived on margins and in gutters, and of the seamy side of city life. To him, a messy future is just another expression of human failure.”

There is certainly no shortage of failure in Terraformars. The crew is an assemblage of criminals and fugitives, ranging from a disgraced ex-cop to Yakuza thugs, a serial killer, an illegal immigrant, a terrorist and the head of a child prostitution ring, to name a few. Not exactly the astronauts from The Right Stuff.

They are up against impossible odds; the humanoid cockroaches are stronger and faster than even the enhanced humans, and they spread to the very horizon, sometimes forming vast tsunamis of bugs. And the human characters die a lot. When we’re first introduced to our cast, there are quite a few of them, but they fall fast and often, frequently so suddenly and with so little pomp that their death barely has time to register before the camera is moving on to the next assault.

Terraformars is also an extremely gooey movie. Everyone – bug-infused humans and humanoid roaches alike – seems to mostly be filled with either a milky translucent goo that is shortly all over everything or greenish-black blood that looks like it came out of the bottom of a bag of fresh-cut grass.

Adapted from a popular manga series of the same name, Terraformars has the feel of something episodic. Plot twists come at a seemingly breakneck pace and little space is given for character development. By the time the opening credits roll, we’re already on board the ship headed for Mars, and what backstory we get comes mostly in the form of sporadic flashbacks.

The screenplay gets a lot of mileage from one simple parallel: Five-hundred years ago, scientists sent moss and cockroaches to Mars in order to terraform the planet for human habitation. Now, this band of misfits is being sent to wipe out the cockroaches, which have evolved into blank-faced, musclebound humanoids with disturbingly human teeth and cerci on their butts.

That the humans have been genetically modified with the properties of bugs is only the most overt symbol that these are people that society considers vermin being dispatched to wipe out other vermin. “We’re the Earth’s rubbish being sent in a metal coffin to clean up Mars’ rubbish,” as one character succinctly puts it. 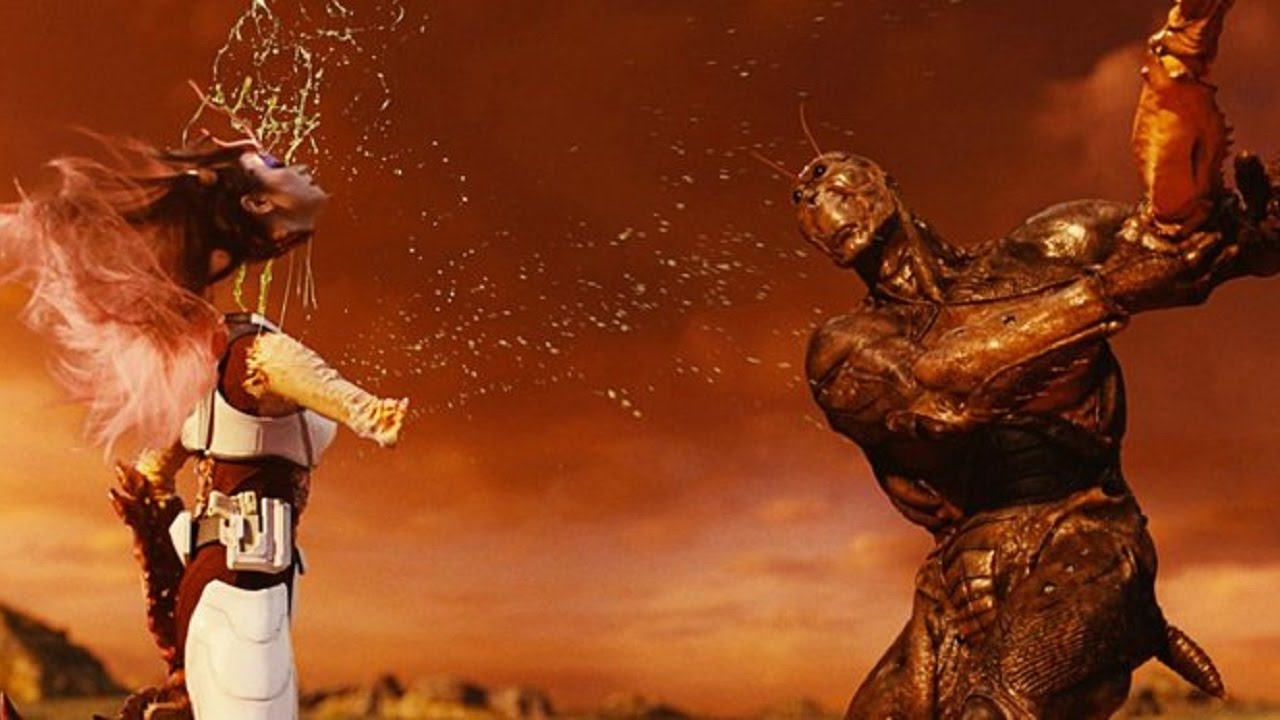 None of this is exactly subtle; but then, neither was Starship Troopers. The real question isn’t whether Terraformars is actually any good or not; it’s whether we would even be asking ourselves that question if anyone but Takashi Miike had directed it. With someone else’s name on the byline, would we still be turning over rocks looking for signs of a master’s hand in what appears, at first glance, to be a pop confection, or would we discount it automatically as, well, rubbish?

* The internet seems to almost exclusively style the title as two words – Terra Formars – but the Blu-ray packaging always has it as one, so that’s what I’m going with here.

Breakups, Dear You, and Jawbreaker