Apparently box office for horror movies has been surging since the 2016 election, which I would file under “news, least surprising of all time.” Part of it is just serendipity: Jordan Peele’s Get Out was probably going to do well no matter which white millionaire won, and most of the other horror movies that released in 2017 and 2018 were likely in some stage of production before the election. But it’s not really the resonant content I’m interested in here – just the fact that at a time when everything seems in a perpetual state of apocalypse, we seem to enjoy nothing more than terrifying ourselves further.

This is (somewhat) also the point behind one of the two documentaries recently released about the misbegotten Fyre Festival, Hulu’s Fyre Fraud. Millennials, the documentary argues, pursue “experiences” in order to escape the political reality in which they find themselves. This is an observation that’s largely missing from Netflix’s Fyre: The Greatest Party that Never Happened, although both are, at the end of the day, about lying so hard and so fast reality can never catch up with you. It’s also part of why I think Hulu’s documentary deserves a second look, despite being the less polished of the two.

Another part is that, well… the Netflix doc has its own problems. It’s co-produced by FuckJerry, the advertising firm that churned out a lot of the festival’s slick advertising. You can choose whether or not to believe that the FuckJerry employees featured in the Netflix doc are sincere when they said they were absolutely disconnected from the whole shitshow, but it is damning that the doc neglects to mention FuckJerry is named in the $100 million class-action lawsuit along with the festival organizers.

This aside, I think the Netflix doc is a… decent piece of work? It’s certainly more attractive to look at than Hulu’s Fyre Fraud, which leans heavily on B-roll and questionable, snarky editing choices I personally found childish and to its detriment. It also paid to interview Billy McFarland, the serial con artist at the center of it all – but considering McFarland spends most of his interview hoisting himself by his own petard, I can’t say he’s really coming out ahead in that arrangement.

No, what I really find significant between the two documentaries, and what I wish more people were talking about, is that only one of these films strives to put Fyre Festival into socioeconomic context. And it ain’t the one by FuckJerry. 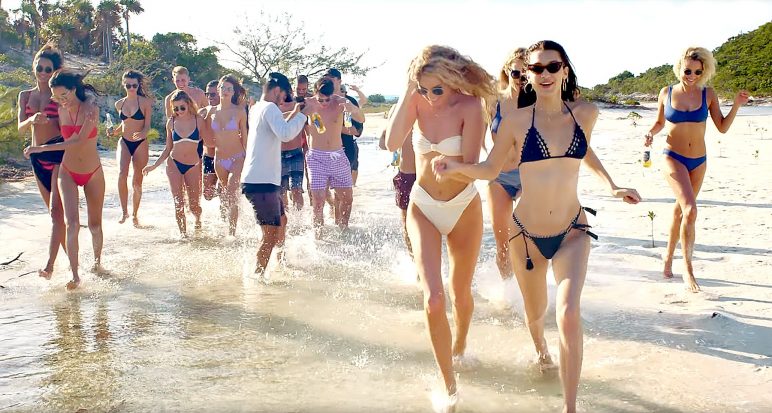 I’ve gone through both docs three times now (because, well, remember what I said about horror movies) and even though both tell 90% the same story, they could not be more different when it comes to the actual content of the interviews. Netflix may have Andy King recounting an actually fucking horrifying story of sexual harassment, but only the Hulu doc namechecks affluent whiteness and the gross colonialism/cultural appropriation which pervade the whole modern festival scene.

Other terms which appear in the Hulu doc, but not in the Netflix one: Precarity, poverty, trustafarian, Amazon, Silicon Valley, college debt, anxiety, political environment, abusive, Trump.

It’s not that socioeconomic undertones aren’t present in Netflix’s Fyre (local restaurant owner Maryann Rolle wiping out her savings to support unpaid workers is probably the most devastating moment of the film), but they aren’t articulated in the same way. Fyre takes for granted that McFarland’s serial scamming is the biggest crime on display here, while Fyre Fraud actively calls out the larger capitalist system that creates Fyre Festivals in the first place. Here’s Tribune News Network’s Ava Turnquest, a Bahamian reporter who appears in Fyre Fraud:

Because of our proximity and our high visibility, the Bahamas have always been a first-stop shop for scammers. We’re a country of industrious, hardworking people, but unemployment is incredibly high. We’re still a developing country. The culture of exclusive resorts, this ultra-luxe lifestyle in an environment where there’s so much poverty — there is a level of collusion and pay-for-play and kickbacks involved. It’s so ripe for fraud.

When I was sharing my thoughts with a friend (who, full disclosure, has had material stolen by FuckJerry and knows full well he’s not unbiased here), he remarked: “Everyone… I ever gave more than a year of my life to was always Billy McFarland.” And I think that’s the real, essential horror of both documentaries: not that this one guy defrauded a shitload of people with apparently zero remorse, but that there are tons of people just like him. I’ve worked for McFarlands. Our world is governed by McFarlands. These leeches who process everything by its numerical value and exist in complete disconnection from how the ordinary person lives are quite literally setting our whole fucking world on fyre.

On a production value level, yeah, Hulu’s Fyre Fraud is the cheaper, clumsier of the two documentaries. But it’s the only one I see trying to look at the bigger picture, the one we’re all desperately trying to process but not directly confront. 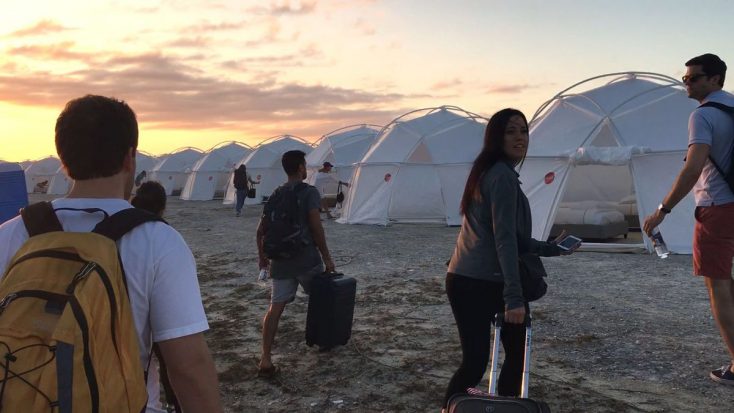 Fyre Festival, as it appears in the Netflix documentary

In 2012, a little horror film called Resolution released and was promptly forgotten in favor of its funnier, more expensively-produced cousin, Cabin in the Woods. Just as in that film, the “antagonist” of Resolution is storytelling itself. In the final shot, the camera seems to come alive and looms over the protagonists, who frantically apologize in a bid not to get murdered. Or erased from existence. I forget; it’s been a long time.

But that shot will always stay with me. The moment the protagonists realize the monster they’re looking for is actually the frame in which they exist, and that even acknowledging its presence has endangered them. They beg for mercy, become tiny in the frame, and offer to “try it another way.” Because the beast loves stories, you see, Hollywood three act structures especially, and it hates seeing them subverted.

The monster roars, the film cuts to black. You get no points for trying to appease the system. Once you’ve noticed the edges of the frame, it’s too late for you. It’s already recognized you as its enemy.

Anyway, Resolution is one of the scariest films I’ve ever seen. But if you’re not up for that, Fyre Fraud is a close second.

The Bleeps and Bloops of Destiny are Necessary Worldbuilding