Double Dragon isn’t quite the first live-action film ever adapted from a videogame – the Super Mario movie beat it to the punch by a little over a year – but it’s that close. As such, it doesn’t really know what it wants to be.

Before it became a film, Double Dragon was a 1987 beat-‘em-up arcade game (one of the first) that was ported onto NES, the Sega Master System, Game Boy and more, and gave rise to a bevy of sequels. There was also a short-lived Marvel comic book and a Saturday morning cartoon series, which in turn had its own line of action figures. These earlier media adaptations probably had as much or more to do with the direction taken by the live action film as the games ever did, though the movie then influenced the release of the 1995 Double Dragon fighting game for the Neo Geo. It all gets a little confusing.

The film, from music video director James Yukich, takes the game’s premise of twin martial artist brothers and adds a mystical Double Dragon amulet that has various magic powers, not to mention themed gangs, a rich CEO villain and a post-apocalyptic cyberpunk future, because it is a martial arts videogame movie made in 1994 and was therefore required by actual law* to be set in a post-apocalyptic cyberpunk future.

In this case, the apocalypse in question was “the big quake” which destroyed Los Angeles in the year 2000 (remember that?) and left “New Angeles” in its place, a ruined and flooded city held up by giant jacks which have to be manually adjusted as aftershocks continue to rock the buildings some seven years later. The handful of structures that are still standing are topped with huge “smog fans,” and Andy Dick shows up as a TV weatherman to warn of dangerous “black rain,” never mind that whenever anyone goes outside the weather is beautiful, clear and sunny.

Scott Wolf from TV’s Party of Five plays hotheaded Billy Lee, who I guess we’re supposed to like because he’s kind of a jerk? He is definitely Poochying way too hard. An early-career Mark Dacascos plays his more even-tempered brother Jimmy, who at least actually knows martial arts instead of just mugging at the camera, which is about all Billy ever does. (Seriously, were there no dorky white guys available who could act like they knew how to fight?)

Perhaps more importantly, Robert Patrick, just three years past his famous portrayal of the T-1000 in Terminator 2, plays the villainous Koga Shuko, “the richest man in the world,” who wants the Double Dragon medallion so that he can have total control of New Angeles. This seems like a fairly modest goal, all things considered, since he basically seems to run the city already. Just about everything we see throughout the film is branded by his company, with one of the film’s best gags being a box of “Shuko Krispies” on the breakfast table. (It’s just a regular box of Rice Krispies – the top flap even still has that name on it – with Snap, Crackle, and Pop all wearing giant black wraparound sunglasses.) 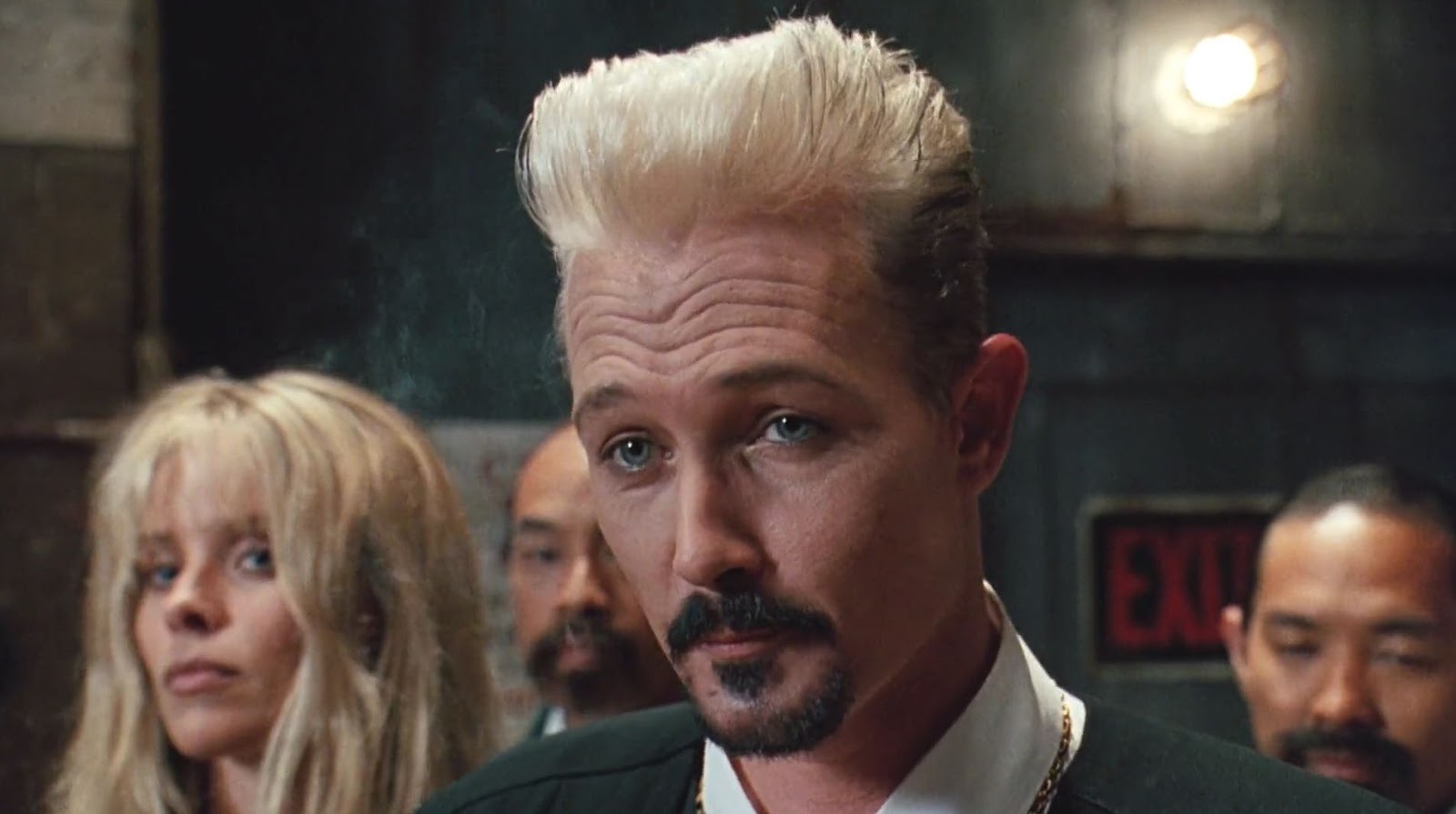 As Koga Shuko – whose real name is much whiter, but, as he puts it in the movie, “Nobody wants to party with Victor Guisman” – Patrick has bleached blonde hair that’s black at the sides, a movie villain goatee and, of course, shades that he wears indoors. Once he’s got one half of the Double Dragon medallion, he can also turn into an optical-effect shadow, which allows him to do things like possess people and, at one point, Darth Vader-strangle Michael Berryman (The Hills Have Eyes), who shows up briefly as a gang leader.

Okay, so, we got back to them now, let’s talk about the gangs. According to this movie, back in 2000, after the big quake, there was chaos and “no help from the feds,” so the police and the gangs formed a truce. The police patrol the streets during the day, and at night they belong to the gangs. There’s a curfew – you’re reminded of it with neon clocks wedged between the giant jacks that hold up the buildings – and everyone who isn’t a member of one of the gangs tries to get in before dark.

If this seems like a remarkably amiable system for violent street gangs, well, bear in mind that these gangs also use an online “gangnet linkup” – think of it as an early LinkedIn, but for gang members – and “accept all major credit cards.” The gangs themselves are Saturday morning cartoon versions of the themed gangs from The Warriors. There are clowns (complete with big clown gloves) and postal workers and hippies and gangs dressed like prep school students with multicolored beanies, you name it. 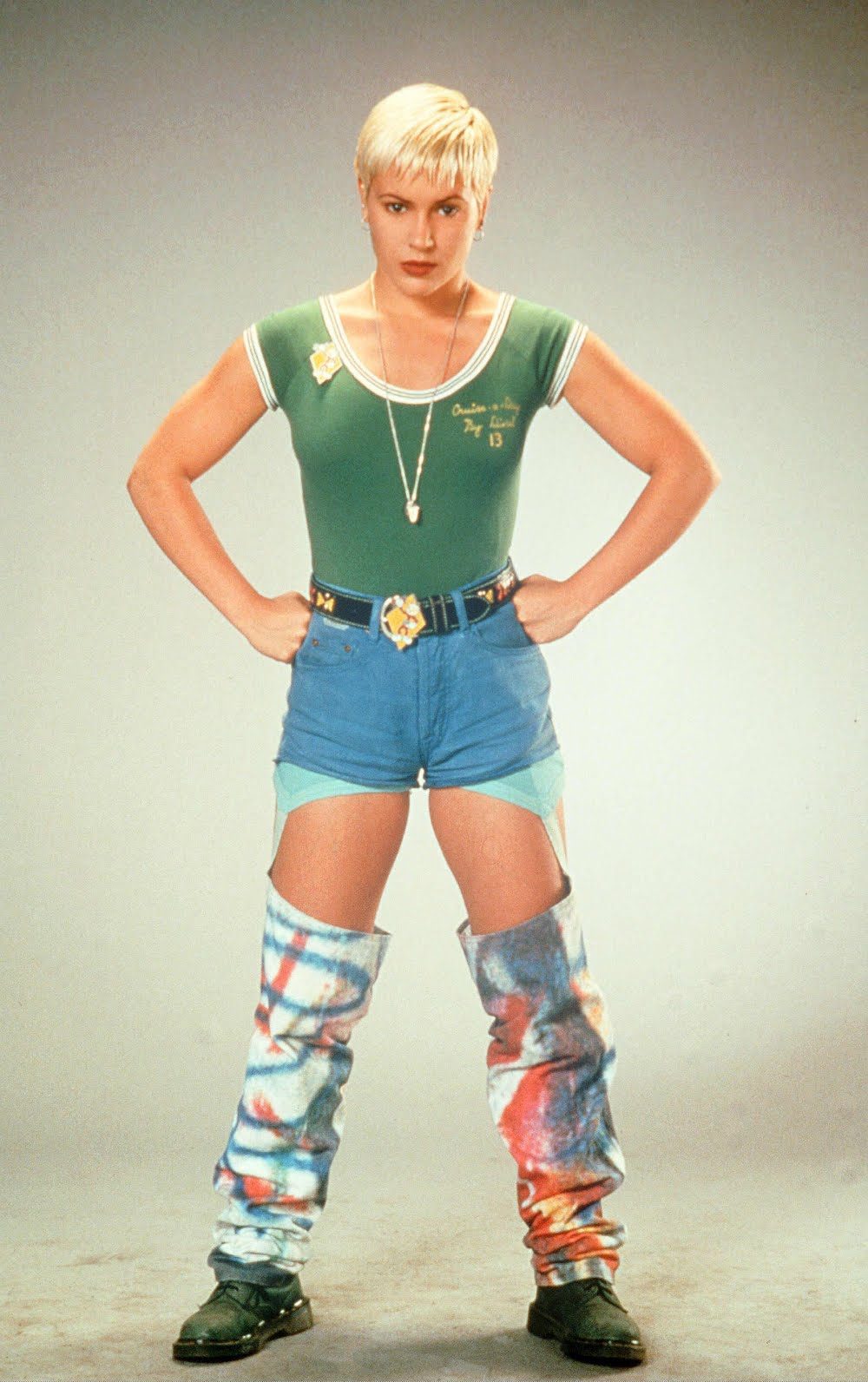 There’s also a good-guy gang, the “Power Corps,” which hangs out in what I assume is supposed to be some kind of abandoned power station done up like an episode of a kids’ game show, complete with a river of Nickelodeon-green slime that runs through the middle of it. That’s where we meet Alyssa Milano**, playing the damsel-in-distress role from the game, though here she’s traded up to the leader of a tough gang of vigilante kids from an after-school special.

Perhaps because there weren’t really any videogame movies before this, Double Dragon owes much of its tone to the live-action Ninja Turtles films, instead. Pretty much every structure that we see in the movie has been turned into a clubhouse, complete with climbing nets, basketball hoops, skateboard ramps, neon signs, vending machines, arcade cabinets*** and lots of graffiti. The henchmen are mostly bumbling and no one ever hits anyone without stopping to make a face or utter a quip.

Strangely enough, the other biggest reference point in Double Dragon seems like it might be RoboCop, of all things. If anything, the ruined city of New Angeles is more fleshed out than any of the actual human characters in the movie, complete with some nice mattes of half-drowned major landmarks. It certainly beats Carpenter’s Escape from L.A., which would hit theaters just a couple of years later.

The film sells its post-apocalyptic setting partly through product placement and news stories that interrupt the action to give context, including a fake commercial for “Jack City,” the dealership that sells the giant jacks that hold everything up. These news stories, which feature cameos by George Hamilton and Vanna White, as herself, also reveal that Madonna was married to Tom Arnold in this timeline, and mention “Vice President Jerry Brown,” possibly a reference to the then-former governor of California, who had recently lost a bid to be the Democratic presidential candidate in 1992.

(Also, the game’s weird “hooray the cops are copping again!” ending is such a “winners don’t do drugs” moment that it could only have come out of 1994. It makes you long for a Streets of Rage adaptation that flashes “only trust your fists, police will never help you” up on the screen, They Live-style.)

There are car chases (remember all those car chases that you loved in the Double Dragon videogame?) in which our heroes drive a flame-spewing station wagon that runs on garbage and, because it’s the ‘90s, there’s also a jet-ski chase on the Hollywood River****. Where the jet-skis come from or why they’re a good idea on a toxic river that is described as “liquid death” is much less important than managing to cram a jet-ski chase into your movie. 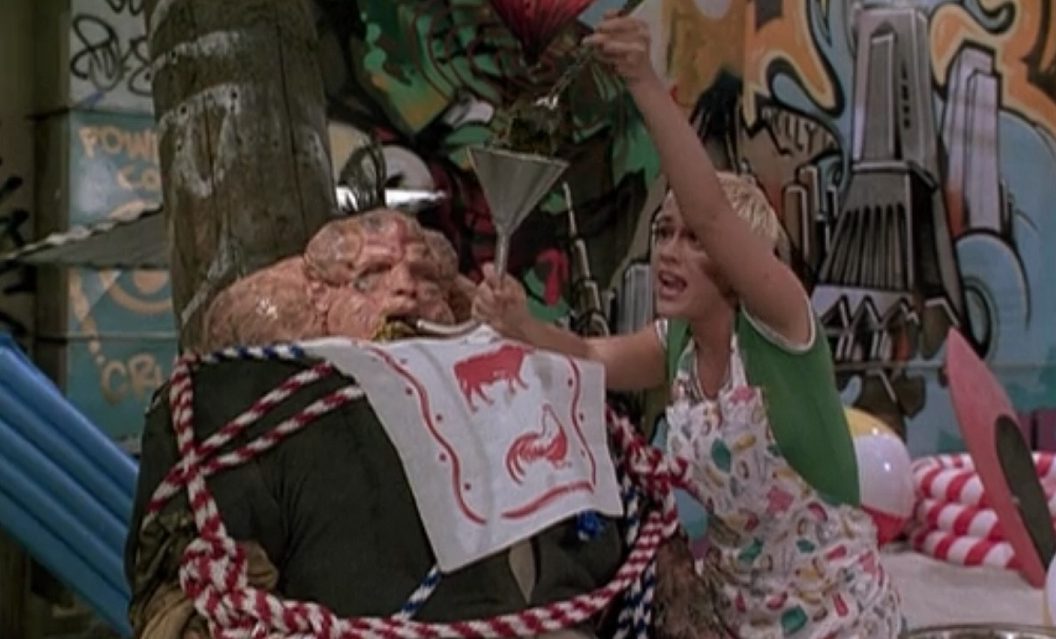 Because it’s the ‘90s*****, there are flannel shirts everywhere and people say things like “gnarly” and “eat fist, butthead.” Giant gang member Bo Abobo – a character from the game, here mutated into a huge rubber baby monster by Koga Shuko’s weird cybernetics lab, because of course he has one of those – is tortured by feeding him spinach. At one point, a flash mob of skateboarders distracts the security at basically the only non-ruined building left in the entire city.

If all of this sounds like a godawful mess, it is, but it’s a weirdly robust mess at times. This may be because the writing credentials of Double Dragon are also pretty weird. The story is partially credited to Paul Dini, while the screenplay comes from Michael Davis, who worked as a storyboard artist on Teenage Mutant Ninja Turtles 2, and Peter Gould, who would go on to win an Emmy for Breaking Bad and co-create the spinoff Better Call Saul.

Director Yukich has been quoted as saying that he wanted to make the movie in a “funnier, light-hearted vein,” referring to the main characters as “three kids on an adventure” and saying that “we didn’t want to make something that kids would almost be too afraid to see.” All of which probably goes a long way toward explaining the film’s lame jokes and bizarrely cobbled-together plot.

I never saw Double Dragon when I was a kid. I have no idea why, since I have vivid memories of seeing (and loving) Teenage Mutant Ninja Turtles 2 in the theater. But if I had seen Double Dragon back then, I probably would have hated it, having a kid’s instinctive revulsion toward anything that I could tell was trying clumsily to pander to me – even while also having a kid’s instinctive blindness to so many other things that also were. Now, though, Double Dragon becomes less a movie at all and more a fascinating curiosity; an unusual and extinct insect, trapped irrevocably in the amber of its moment in time.

The new Blu-ray from MVD could probably use a slightly better sound mix, but it looks great, giving you plenty of opportunities to read the weird crap that’s written all over everything. It also comes with a raft of special features, including a documentary on the making of the film and even an episode of the Saturday morning cartoon series.

* Not an actual law.

** “Who’s the boss now?” one of the villains quips at her, to give you an idea of the level of joke-writing you can expect.

*** Near the end of the film, Billy Lee does a dramatic pause in front of a Double Dragon cabinet – the titles of all the other games have been obscured by graffiti.

**** Ironically, the scene, which ends in a huge pyrotechnic conflagration in which the river catches fire, was filmed on the Cuyahoga River in Ohio, famous for actually catching on fire.

***** You can explain almost everything that happens in this movie with, “because it’s the ‘90s.”

Forza Horizon 3 Is Video Game Escapism at Its Finest