(For those with less misspent youths—or perhaps just more discriminating tastes—you can get at least some idea of the average kickboxing cyborg movie from Kickpuncher, the fictional send-up/homage to the form that makes guest appearances in various episodes of Community.)

Albert Pyun wrote and directed the Jean-Claude Van Damme-starring Cyborg in 1989 and, in so doing, essentially set up the blueprint for the entire subgenre, then went on to direct about half the movies that followed that blueprint. As such, his name has become relatively synonymous with mid-90s cyborg flicks, notwithstanding that he made plenty of other things including The Sword and the Sorcerer, a 2006 adaptation of H.P. Lovecraft’s “Cool Air,” the infamous 1990 Captain America, and Full Moon’s Dollman and Arcade, to name just a few.

Of all the various kickboxing cyborg movies that crowded the rental shelves in the ‘90s, the one I remembered with the most affection was Albert Pyun’s Nemesis. And I guess I’m not alone, seeing as how it has gotten no less than four sequels over the years, three of them directed by Pyun himself. The fifth film in the unlikely Nemesis franchise was actually just released in 2017, directed by Dustin Ferguson, whose filmography includes such titles as Horndogs Beach Party, Camp Blood 4 and 5, and Grindsploitation 4: Meatsploitation. As I write this, Pyun is rumored to be working on another installment, which would cross over the Nemesis franchise with those original Cyborg movies, somehow. For those who want the full experience, MVD is also putting out a Blu-ray box set of the first four Pyun-directed Nemesis flicks as part of their Rewind Collection. 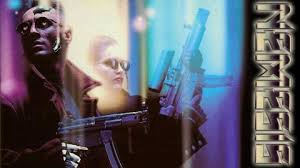 While most of the kickboxing cyborg movies were one kind of rip-off of RoboCop and/or Terminator or another (usually with a little kickboxing thrown in for good measure), Nemesis mostly trades fisticuffs for film noir, in spite of providing a launch pad for the cinematic career of French kickboxer Olivier Gruner. Think Blade Runner with more eastern European accents and a lot more shooting and explosions. (The film’s entire third act is basically one long-running gunfight, culminating in a climax atop a volcano.)

Gruner plays Alex Rain, an increasingly cybernetic LAPD officer turned junkie turned  . . . whatever it is that he is by the film’s end credits—“Very funny fake name,” someone quips when he’s trying to check into a hotel in the film’s made up techno frontier town of Shang Loo, Java. While he spends more of the film’s 96-or-so minutes shooting guns and brooding than he does kicking anyone, he’s oiled up and shirtless much of the time and is heavily accented enough to make you think of JCVD.

People in Nemesis spend an inordinate amount of time talking about how much they need Alex for one thing or another, in spite of the fact that we mostly see him getting badly hurt and rebuilt, becoming a little less human each time. What, exactly, makes him stand out from the run-of-the-mill systems cowboys and cyborg outlaws he encounters is never terribly clear but that’s okay because nothing really is in a plot that’s a bit hard to follow, mostly because no one takes more than a few breathless moments to explain it between firefights.

In spite of the fact that most everything looks like a slightly crappier version of 1992, you can tell it’s the future because everyone wears their sunglasses indoors. It’s that kind of movie. While the film’s cyborg endoskeletons owe a debt to Terminator, its heart is pure cyberpunk, even if most of its budget goes to pyrotechnics and the cyborg equivalent of gore.

In one of the few moments that I remembered clearly from my youth, we are treated to a cyborg—played by Thom Mathews from Return of the Living Dead—opening up his face to reveal a gun, a scene that would have been right at home in Ghost in the Shell. Nemesis makes plenty of overtures towards the same kinds of “what-does-it-mean-to-be-human” themes as its betters, too, though never for very long before something is blowing up again.

What I had forgotten is that the grim-n-gritty trappings of Nemesis are sporadically interrupted by jolts of slapstick, such as when Alex shoots his way through not one floor but several, or a knock-down, drag-out on an industrial slide. It must also be said that the cyborgs in Nemesis are not very sturdy. At one point, a little old lady guns one down with a comically large pistol she pulls out of her purse. Later, Alex takes one out simply by kicking it really hard. 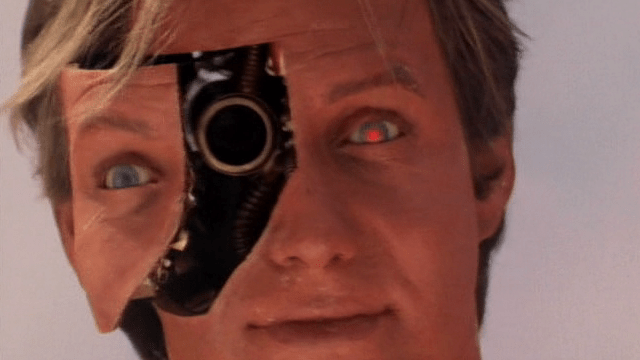 Rumor has it that Pyun had been developing Nemesis under the working title Alex Rain for several years before it went in front of cameras. According to Wikipedia, the project began life as a police procedural concerning an FBI agent tracking a serial killer in the Neo-Nazi community. From there, it morphed gradually into a cyberpunk flick with a 13-year-old protagonist intended as the vehicle for Megan Ward—who Pyun also worked with in Arcade—before settling into its ultimate form with Gruner in the starring role.

While possibly apocryphal, this change in casting might partly explain one unusual aspect of Nemesis; namely, its tendency to give its characters gender-flipped or gender-neutral names. While male (or male-presenting) characters get names like Michelle and Angie and Marion, female-presenting characters are named Max, Jared, Julian, and so on. Perhaps this was intended as an inroad to some of the larger questions about identity toward which the film mostly pays lip service. If so, it doesn’t add much, but it does help the archaic future of Nemesis feel at least a little more progressive than it otherwise might.

To call the supporting cast of Nemesis “all-star,” as the back of the Blu-ray does, may be a stretch, but there are plenty of familiar faces, including Brion James, reminding us all that we could be watching Blade Runner if we wanted more philosophy and fewer explosions. Dollman himself plays police commissioner-cum-bad guy Farnsworth, while Cary-Hiroyuki Tagawa, who was Shang Tsung in the Mortal Kombat movie, shows up as a fast-talking gangster. If you ever wanted to hear Shang Tsung call someone “brah,” you are in luck! There are even early-career appearances by Jackie Earle Haley and a naked Thomas Jane.

While the film assures us that these adventures are globe-hopping—Los Angeles, Baja, Rio de Janeiro, the Marshall Islands, Java—most of the filming took place in California, Arizona and on Hawaii’s Big Island. One has to give credit to Pyun and cinematographer George Mooradian (who had worked with him on Dollman the year before); the industrial hellscape of the future actually looks kind of beautiful, especially in the wider 2:35:1 aspect ratio available on the MVD Blu-ray, never mind the natural beauty of Hawaii standing in for Java.

The special features on the disc include various cuts of the film, such as the extended cut previously released on Japanese laserdisc and the director’s cut, aka Nemesis 2.0, as well as various interviews and featurettes on the film’s stunts and effects.

In the Trenches with Root