Growing up with games, I became used to fanciful settings that had very little grounding in the real world. Games were almost always based on fantasy settings, so that’s what ended up shaping my imagination as a kid. NES games like Final Fantasy and The Legend of Zelda would form the basis for my play even away from the console. I would pretend my neighborhood was in the world of Zelda, running around with a baseball bat as a sword and a random twig as a key to “unlock” the more secluded overgrown paths. That I felt the need to change my own world in my head spoke volumes about how I saw my reality, and the potential of it laid largely fallow.

That all changed with EarthBound, which completely shifted my idea of what videogames could be. The game takes place in a modern day setting complete with drug stores and burger joints. Your weapons are things like baseball bats, frying pans and yo-yos. You can even dig through garbage cans to find items. So many things in EarthBound are just so mundane in comparison to other games of the time. This was huge to me as a kid, because all the makeshift weapons and equipment I had been using as stand-ins for actual weapons and equipment were suddenly transformed before my eyes. A bat is a weapon. You can have adventures in your own backyard without pretending it’s something else.

It sounds strange to be excited by mundane things, since it’s the fanciful things we can’t get in real life that tend to be the most exciting. But the mundane by itself doesn’t make EarthBound special. It’s when you mash it together with the strange that the mundane comes alive as truly odd. EarthBound has its share of strange phenomena. Space aliens, teenage gangs who wear shark-like bodysuits and kaleidoscopic battle backgrounds make for a weird RPG, but become downright bizarre when juxtaposed with the mundane. EarthBound is a master class in how to pull of surrealism in a video game.

This mix of the real and surreal is tied together in a Dragon Quest-like JRPG system, though it makes some very subtle, forward-thinking steps forward in RPG design. Instead of purely random encounters, enemies appear on the map and don’t engage in a battle until they touch you, allowing you room to avoid them or attack them from the back to catch them by surprise. Damage in the battles themselves isn’t immediate, but rather ticks down at a constant pace until all the damage is taken, which gives you time to heal before the meter reaches zero. 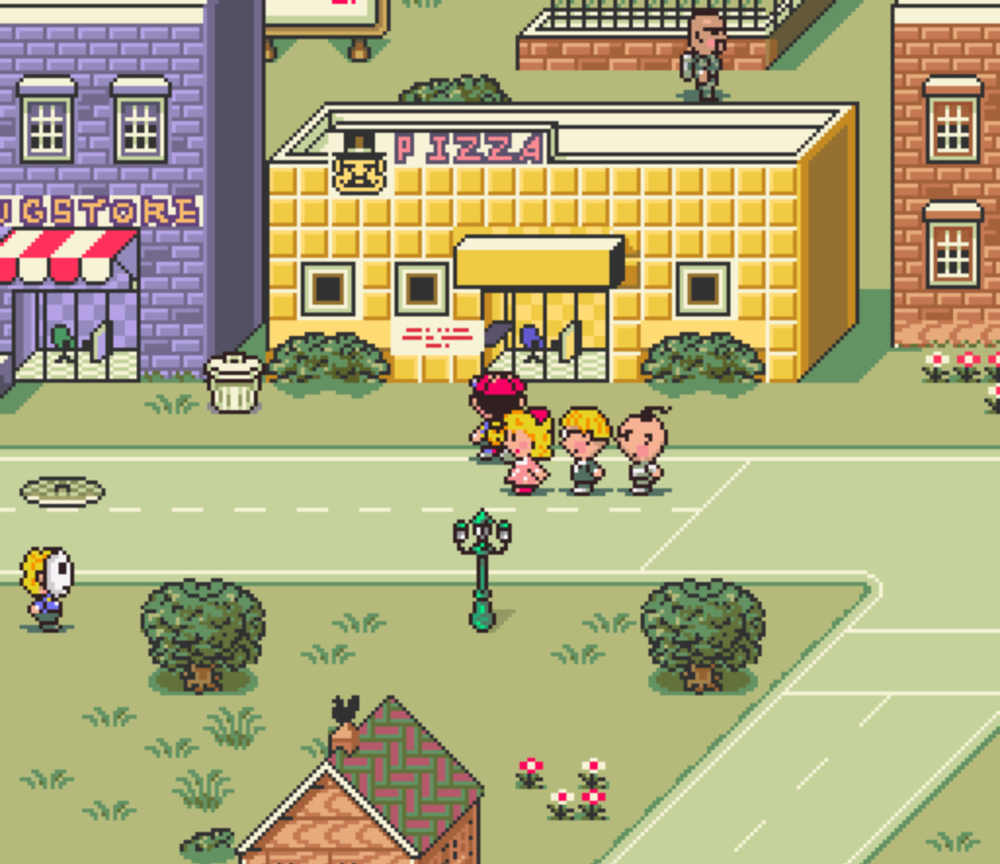 It’s like the entire vibe of the game is to be as odd as possible without being off-putting just on a conceptual level. Some of the situations you find yourself in – fighting a cult who worship the color blue, entering the neon-colored shadow of a city where “no” means “yes” and vice versa, tripping balls off of hallucinogenic cake that summons a warrior from a far off land to join you – are not only absurd, but absurd in an idiosyncratic way. Yet you can sort of understand descriptions of the absurd things you do in the game since they’re grounded in the real world. The opposite is true as well: The strangeness elevates the mundane elements into something more than they are, sparking our imaginations with where the mundane can go.

But what ties everything together is how downright human EarthBound is underneath all the strangeness. The Americana setting of the game evokes a homey kind of nostalgia that makes the game feel instantly warm. In fact, the entire quest that protagonist Ness is on is to harness the power of nostalgia to awaken his inner courage so he can save the world. The soul of EarthBound, though, is in its NPCs, who each have a cool bit of dialogue even when it’s not relevant to the quest at hand. The dialogue that typifies this approach best is the baker in Burglin Park who says “I like to sell my goodies on the street. Sure, flies land on them, but in my opinion, it makes them taste even better!” Unusual as that statement is, you could buy somebody actually saying it. In EarthBound, everyone’s just trying to live their life the best they can with their quirky selves, just like the rest of us. Because of this, it’s easy to envision yourself in that world, too.

Even in the little details that most won’t notice, EarthBound finds the amazing in the mundane in a way that games still don’t to this day, and in doing so, elevates the mundane and stimulates our imaginations. EarthBound embodies the mundane strangeness in all of us.