Right after everything has gone to hell, but before we really get into the true creepy crawly nature of the rest of the film, there’s a scene where a lander explodes casting the night in sharp relief, fire crawling upwards. The rest of the crew look along in astonished horror as the ship explodes, all the while you hear the gasping death throes of another member behind them. On fire, and grasping wildly about her head, a woman climbs out of the lander and rolls, dead, down the gangplank and onto the earth.

It’s a great scene, visually and emotionally. But also that character should be very dead as the last time we saw her she was eviscerated and bloody at the base of a med-bay. In it’s own way, this scene is the perfect metaphor for Alien: Covenant itself. Makes very little sense, should be dead, but looks very good.

Alien: Covenant is a slasher movie shot by a visually talented director who really wanted to infuse just a bit of Biblical flavor to his haunted house film. There’s the argument that most Alien films are haunted house films, just with the house in space, and Covenant feels like that. It specifically feels like the 1977 Japanese film House, just with more sedate imagery. Instead of the walls literally raining blood, we have Giger-esque drawings of a woman’s mouth infested with alien spawn or an alien lifeform bursting bloodily from someone’s spine. It feels like House because once the characters meet the main antagonist, the audience already knows it is too late, and there isn’t even anything subtle about the way that the antagonist begins to size them up to see how best to kill them. Their fate is sealed.

Designed for an audience literate in the world of Alien, there’s few moments in Covenant where you are left unaware of the impending doom of the crew. Every new reveal is just a reminder that what you’re watching is an Alien movie. The first shot of the doomed craft from the end of Prometheus, the dusty pollen sliding like the magnetic filings in a Wooly Willy toy, the eggs resting serenely in the dark waiting for a host, an alien bursting bloodily from the spine of a Marine. This isn’t a movie built on its own merits, but rather a franchise of cues and shock.

This ultimately leads to a severe lack of tension in the film overall, feeling more like a doomed 70’s slasher at points than a modern science fiction film. How can we care about these characters when we know they’re going to die? Not a single one of them is Ripley, so we know that their deaths are imminent and preordained. It’s a movie that is more about the journey than the destination, the destination being a bloody amniotic sac of virulent death.

The casting in this movie is all over the place, especially in the case of James Franco. He’s in the movie for barely a moment. He may actually be in the trans-media piece Prologue: Last Supper for more screentime than the full movie. If he had been a bigger part of the marketing or a bigger name, you could almost accuse the film of a bait and switch through stunt casting but the way it stands he feels more like a conspicuous extra: there long enough for us to finally see James Franco die in a fire. Danny McBride is similar. Of the characters he probably has the most interest, which you can attribute to the cowboy hat, but that isn’t saying a whole lot. The characters in Alien: Covenant are more defined by their deaths than their traits.

The exception, as it was for the last Alien film Prometheus, is Michael Fassbender. 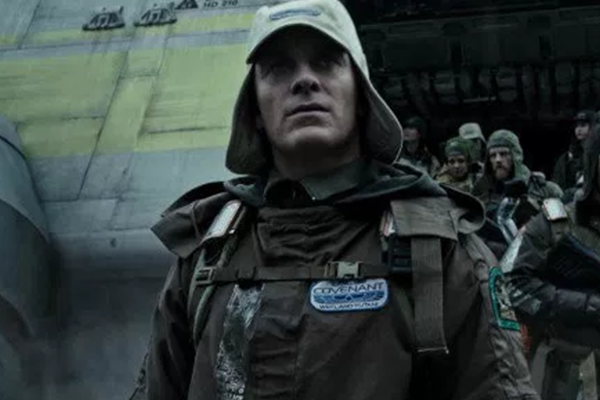 The best and worst thing about Alien: Covenant is its preoccupation with the critical and audience response to Prometheus. Best, in the sense that it knew to bring back Michael Fassbender as unhinged and deeply creepy android David (he also plays the more reasonable and nuanced android Walter). It allows us to take a deep dive into the most interesting character in the last two movies, a figure drawn to obsession and perfection and a maddening level of surety with his own mad schemes. Worst, in the sense that the movie seems unwilling to give the audience a film without the titular alien crawling around the titular spaceship, shoving the entire plot of the first Alien film into a 20 minute burst at the end of Covenant. This seems a direct response to the audience hatred for the arty bullshit that was the previous installment, a film obsessed with the idea of creation and God in the least interesting ways possible — a literal hunt to find the creator. Covenant is still on that track and digging into why David thinks the Xenomorph is perfect and worthy is both interesting for its peek into madness and also deeply annoying because it falls apart under closer examination.

This is the issue with Covenant ultimately, its unevenness. It seems trapped by the two films it is allegedly bookended by, Prometheus and Alien. But those two films, beyond the fact that every Alien film is essentially a retread of the plot of the first film, are different in tone and execution and you can’t really have a film where you talk about the quest to find God becoming a quest to become God alongside a scene where a giant bug creature gets murdered by a piece of construction equipment. Unless you’re watching Alien: Covenant.

The Difference Between Roulette Games