Every week Megan Condis and a group of friends get together for Documentary Sunday, a chance to dive into the weird, the wacky, the hilarious and the heartbreaking corners of our culture.  This column chronicles all of the must-watch documentary films available for streaming.

Objects can accumulate value in a lot of different ways: they can be useful like a flyswatter or a blender. They can be pleasing to the senses like a beautiful statue, or a soft, silky nightgown, or an aromatic candle. Or they can become imbued with great emotional significance, like the Christmas ornament you made in Girl Scouts and presented to your mother when you were ten. Sometimes, especially within the rarefied social circles of the super rich, the most valuable objects are used as props in a show of conspicuous consumption. For items such as these, value doesn’t accumulate due to the properties of the object itself. Rather, value resides in the performances that accompany their purchase, their collection, their display. One buys these things simply to be seen buying them.

Imagine, for example, the rare and extremely expensive wines bought and sold at auction houses and stored in the wine cellars of wealthy collectors, which can go for as much as $500,000 dollars a bottle. So-called connoisseurs claim that the insane prices these bottles command are worth it for the opportunity to taste a piece of history. But in reality, as Sour Grapes (2016) clearly demonstrates, these buyers are far more interested in being known about town as the type of people who have millions of dollars worth of fermented juice in their basements than they are in the art and science of winemaking. 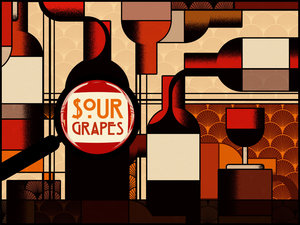 Sour Grapes is the story of Rudy Kurniawan, a major player in the world of wine who went to prison for crafting counterfeit bottles in his kitchen in 2013. Directors Jerry Rothwell and Reuben Atlas are careful to spotlight the 2008 recession occurring in the background of Kurniawan’s epic con job, making it difficult for viewers to feel anything but contempt for his victims (which included the likes of one of the billionaire right wing Republican Koch brothers). In fact, the film suggests that, in a perverse way, Kurniawan actually understands the commodity for sale at these auctions better than the vintners, the sommeliers and the collectors ever did. Kurniawan sold an experience, an illusion of exclusivity, and, in the end, a scapegoat (himself) to punish for daring to mock their little club.

The film’s closing image is of blue collar workers disposing of hundreds of perfectly drinkable bottles (the party foul to end all party fouls!) by casually tossing them into a dumpster, letting them shatter and spill their contents out into the gutters. Just one more opportunity to engage in some opulent wastefulness.

Way back in 2005 and 2006, I worked at a small locally-owned liquor store, and ever since then I’ve always been fascinated by the way wine sellers wrote about their wares. These descriptions often seem more like abstract poetry than an accurate description of a beverage. Does anyone really detect the faint aroma of tanned leather or the meaty mouth feel of Portobello mushrooms in their glass of Chianti? And so, in the spirit of these bizarre sketches, my review of Sour Grapes will take the form of a tasting diary:

Sour Grapes is a robust, leggy film redolent with notes of currants, nutmeg, and an earthy herbal finish. It pairs well with popcorn and candy and is best enjoyed chilled and served during a Netflix marathon on a lazy Sunday afternoon.

Megan Condis is an English Professor at Stephen F. Austin State University. Her book, Playing Politics: Trolls, Fake Geeks, and the Game of Masculinity in Online Culture, is forthcoming from the University of Iowa Press. She also designs video games based on her research, which are available for free at her website.

Unwinnable Listens to the Best Music of 2016 – Finale