From gameplay to art direction, The Legend of Zelda: Breath of the Wild is an unabashed triumph. In many ways, it has set a new standard for open-world games in terms of both freedom and exploration. Sound design is also a high point; the sound of Link’s feet on stone and the little cooking tune are fantastic touches in a tremendous work of sound. At the time of this writing, I have sunk thirty or so hours into BotW, and no doubt will play many, many more.

For all the good that Breath of the Wild brings to the table, however, I simply cannot shake the legacy of the series. Every time I boot up the game, nostalgia rears its ugly head and I yearn for the linearity of past entries. Being a Zelda game carries with it certain connotations, and Nintendo has made a concerted effort to cast off these connotations, for better and for worse.

The call of the next big dungeon has always been an effective carrot dangling before the player, promising a puzzle-rich environment that wraps around on itself in a satisfying maze of keys and switches. BotW lacks these bigger dungeons, opting instead for the smaller, bite-sized shrines and Divine Beasts. Yes, there a lots of shrines, and the Divine Beasts do elicit a sense of awe, but they don’t provide the same epic feeling that you get from entering the Forest Temple for the first time. The smaller scale of the dungeons is to blame for this, which is ironic given the huge scale of the game. 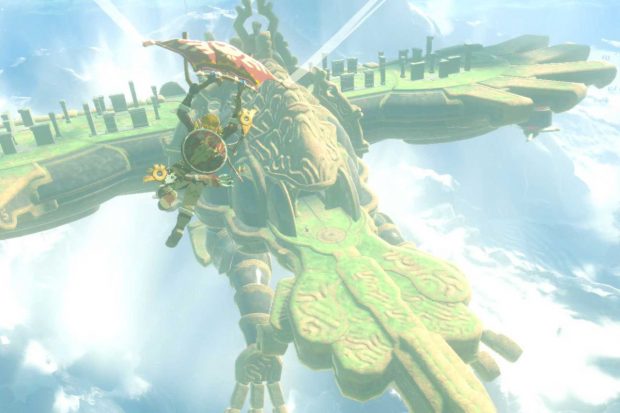 Speaking of scale, BotW is so heavily packed with secrets that there is something to find around every hill and mountain. This is to the game’s detriment; when running from one objective to the next, it’s easy to feel like you’re missing out on so much of what the game has to offer, which is not a fun feeling to live with in a game that already demands a significant time investment.

Because Breath of the Wild focuses so heavily on absolute freedom, any feeling of progress feels diluted by a lack of character progression. Aside from improving Link’s heart count and stamina wheel, there’s no true way to measure progress. The game is book-ended with the most important story moments, with every other story beat completely optional. This is a far cry from Skyward Sword’s heavy focus on narrative, which was an oft-criticized element of that entry, but at least there was a feeling that you were moving the story forward and progressing.

Watching your inventory grow was also a fun measuring stick for progress in past entries, and gaining new key items used to be a satisfying way to overcome a new challenge. Getting the Pegasus Boots in A Link to the Past changed the game in significant ways, unlike how getting yet another traveler’s sword simply clogs up your limited inventory space in BotW.

If I could boil my feelings about Breath of the Wild down into one word, it would be “conflicted.” There’s absolutely no doubt that it’s an outstanding game, and a very strong argument for purchasing a Switch, but, being a Zelda game carries with it certain expectations. It’s almost enough to make me wonder if the game would have been so successful had it not been a Zelda title. I praise Nintendo for striking out in a bold new direction, but I also hope the next entry is a return to form for the series.