The first thing I noticed about this gigantic lone head, covered in a thin veneer of ice, was his outstretched tongue, rolled out like a red-carpet invitation into his mouth. I thought I saw his eyes flicker, but I wasn’t sure if this being was alive. So when I stepped cautiously towards him, I almost jumped out of my seat when a disembodied voice whispered breathlessly.

It seems that this head—the one that resides in this virtual, barren beach—belongs to the artist Theo Triantayfllidis. Titled Self-Portrait (Interior), this is a game about getting uncomfortably up close and personal with a digital version of Triantayfllidis himself, as he warmly requested that I step into his mouth. It’s a tour inside his body and straight into his gut. Once inside, Triantayfllidis murmured how he can feel me sloshing about in his liquids, as he occasionally let out a sigh that shook the surroundings and made my hair stand on end. 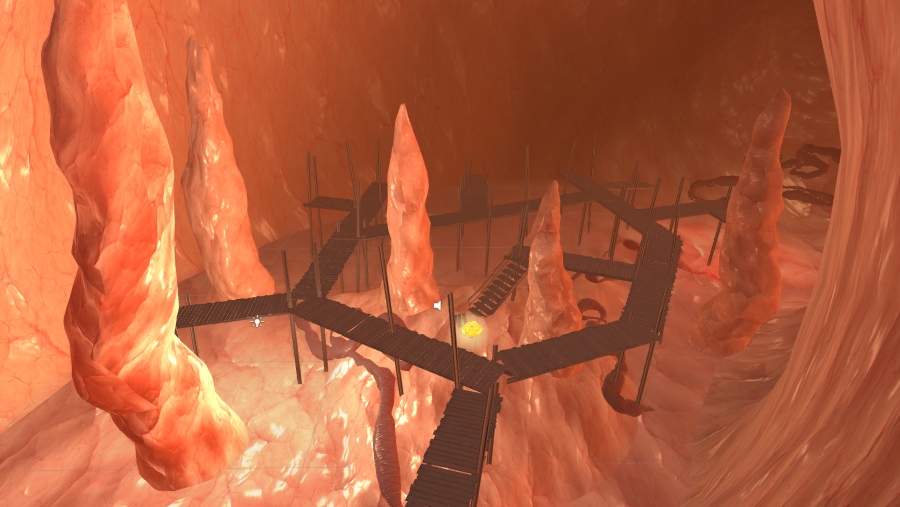 Saying that this is the strangest self-portrait I’ve seen is probably an understatement, even though such means of self-expression has existed since the dawn of time. One of the most prolific self-portrait artists is the painter Vincent van Gogh back in the 1880s. who produced at least 43 paintings of himself in his lifetime. Meanwhile, the first photographic self-portrait was taken by Robert Cornelius, an American pioneer in photography, in 1839; he had to stand motionless in front of the camera for a solid 15 minutes. A little more than a century later, instant film cameras exploded in popularity, which gave rise to a new medium of self-expression for artists. Naturally, this transitioned to digital camera and phone cameras—and then the modern-day selfie was born.

The selfies boom in recent years is no doubt due to the pervasiveness of social media, with apps like Instagram and Snapchat popularizing the sharing of our beautiful mugs online. But how can the self-portraiture evolve beyond the snapping of your own pictures with a smartphone? Perhaps Triantayfllidis had uncovered the answer with Self Portrait (Interior). More than just a self-indulgent videogame to show off his exquisite innards, the game also explores the incongruity and eeriness of intimacy with a complete stranger—that is, one whose body you’re floundering about in, as he questioned your every move inside his abdomen. It’s a little like having intimate knowledge of an acquaintance’s menstruation cycle from her social media updates, even though you’ve met that person only twice about a decade ago.

In an interview with The Creators Project, Triantayfllidis mentioned that through this project, he wanted to “expose the audience to visceral feelings, to a raw and powerful experience, but also inject some humor and a twist to it.” Self Portrait (Interior) was meant to highlight the illusion of free will, with Triantayfllidis’ deep mutterings emphasizing the weight of our decisions. Given the game’s linearity and relatively short length, my takeaway was slightly different, but perhaps his ideas are a lot more pronounced in the game’s VR version.

Find out more about the game at Triantayfllidis’ itch.io page. If you want a more visceral experience, Self Portrait (Interior) is also compatible with the Oculus Rift and the HTC Vive.