It’s been obvious for months now that Back to the Future Part II is running/ruining reality.

If you haven’t noticed, we’re living in an alternate timeline fully conceived and predicted by the blockbuster 1989 film. First, in November, the Chicago Cubs won the World Series for the time in 108 years; although the dark wizard known to us mere mortals as director Robert Nostradamus Zemeckis was off by a year – the flick is set in 2015 – it was plenty close enough. And he predicted a baseball team in Miami, too.

But if you still had lingering doubts that demonic forces were at play, six days later, Donald Trump was elected president in one of the most shocking upsets in American history. As you’ll recall, Biff Tannen rises to power in Back to the Future Part II, ruling Hill Valley from high atop his hotel casino perch. And who was Biff’s character based on, all the way back in 1989? That’s right: Donald J. Trump.

And yet perhaps even that wasn’t enough for you to believe a hit Michael J. Fox (note middle initial!) film had the power to throw the universe as we thought we knew it into chaos.

Then the Oscars happened. When La La Land was handed the award for Best Picture, only to have a mysterious man with a headset appear on stage and inform the producers, who had already been giving their acceptance speeches, that an egregious mistake had been made – the wrong envelope was opened, and Moonlight had actually won! – it could no longer be plausibly denied that the world is spiraling out of control. Indeed, this was a telecast that featured an advertisement by the New York Times on behalf of the truth. Yes – the truth.

Like the Cubs’ championship, and unlike the presidential election, the Academy Awards gaffe was a delightful mistake to watch – and delightfully fitting, if you saw La La Land and know how it ends. I headed to bed entertained, feeling a mix of both happiness and sadness for what are two very worthy films – but still with that uneasy feeling of being stuck in Bizarro World.

Unsettled but exhausted, I snuggled into bed, pulling the warm covers over me, closed my eyes – and then sprung up like it was the night before Christmas.

Why? Because I realized in a flash that there was, indeed, a common thread between the Cubs breaking their curse, a fascist reality TV host becoming president and now the biggest, most surreal snafu in awards show history.

Yup – Back to the Future Part II.

It landed on me, like a pile of manure, that earlier in the Oscars broadcast, in a pre-taped segment, actor Seth Rogen had waxed poetic about Back to the Future; how much he loved the movie and how much it inspired him in his own career. He even cracked a joke about how much the film got right – saying no one would bat an eye if Tilda Swindon showed up today wearing Doc Brown’s futuristic getup from the opening scene. Moments later, Rogen appeared live on stage in a DeLorean, stepped out of it wearing the self-lacing sneakers from the film and was joined by Fox – Marty McFly himself. 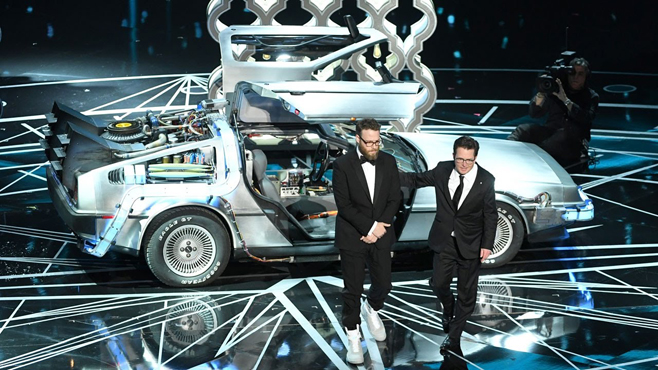 One time is a coincidence. Two is a conspiracy. Three is a rift in the time/space continuum that threatens to consume us all.

I decided I needed to rewatch the movie. By the time this article goes to print, it’s anyone’s guess what will have happened. What else could Back to the Future Part II tell us about the craziness to come?

First thing I remembered, before even the opening lines of dialogue, was the little stuff it got right – newspapers updating in real time like they do today on the Internet. Nostalgia for the ‘80s (one of Reagan’s campaign slogans, btw, was “Let’s Make America Great Again”). Hoverboards (sort of).

And then Marty’s first question to Doc Brown: “What happens to us in the future? What, do we become assholes or something?”

Doc Brown assures Marty and Jennifer that they turn out fine, that it’s just their kids – “something’s gotta be done about your kids!”

But no, actually, it turns out they’ve become assholes too. We’re all assholes now.

Still, beyond self-drying jackets and $40,000 cars, here’s what I learned about the present – or the not-too-distant future – by rewatching a 28-year-old film:

At this point, I had had enough. I stopped paying attention when they returned to 1955. There are more details in the film that could end up meaning something someday – like how the seven cops I counted early in the film were all female. But, as Doc says, you shouldn’t know too much about your future.

And, like Jennifer McFly – played not by Claudia Wells like in the original, but by Elisabeth Shue in Part II – I’m just hoping to wake up and discover it’s all been a bad dream.