The blurb on the back of The Girl from the Other Side’s first volume bills the series as a “quiet fairytale” but what it does not say is that this “quiet” is far from the domestic tranquility of, say, The Ancient Magus’ Bride, another Celtic themed manga built around a similar premise and also published by Seven Seas Entertainment. I had worried that it might not be.

Much as I love Seven Seas Entertainment, they have not shown themselves above flooding the market with derivative knock-offs of their more successful franchises, as when Monster Musume turned into such a hit they suddenly licensed every monster-girl themed manga they could find. As much as I love The Ancient Magus’ Bride for its warmth and moments of traditional beauty, it lacks ambition, and has little understanding of the wilder, more dangerous elements of the fairy tales it draws so often from. Author and artist Kore Yamazaki may profess respect for the violence in these stories, but the world she paints is comparatively tame; for her, the silence of nature is something pleasant.

It’s not an uncommon sentiment. Indeed, the relative silence of the wilderness is often a pleasant reprieve. What sounds there are – insects buzzing about, the crinkling of leaves and snapping of twigs underfoot – at first seem more like an ambient soundtrack than the signs of life. Stay long enough, though, and these noises being to feel like an intrusion into the status quo, made only nervously or accidentally. Animals lower down on the food chain know they would do well to keep the noise they make to a minimum, while predators know the gap between a day spent starving and night sleeping sated is little more than the breaking of a branch or a bush rustled. Stay even longer and what once seemed a peaceful alternative to urban bustles slowly takes on menacing significance, until the silence becomes a kind of permanent tension. How eerie a world it is to visit; how nightmarish a world it must be to inhabit. 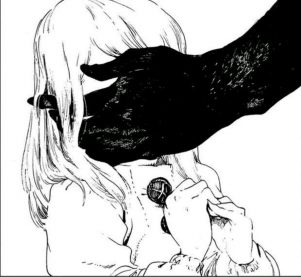 The world of The Girl from the Other Side is one such nightmare world, quiet in the way of undisturbed nature, where every new noise comes invested with ominous undertones and every new shadow with the potential for ruin. Daily life for the orphan girl Shiva and her nameless guardian – a dapper example of the species known as “Others” – seems idyllic, divided mostly between tea parties, naps in fairy rings and bedtime stories. Yet the life of this girl and what looks like a Victorian interpretation of a Goetic demon is undergirded by an ever-present tension. Villages stand empty, not ransacked, not burned, but abandoned, as if the inhabitants had all gotten up from their beds and walked out together. Bodies of the plagued litter the forest, left there by soldiers who venture out from behind the walls of the city only long enough to purge the afflicted. And always just beyond sight lurk the shadowy Others, whose touch it is said can turn a normal human into one of their own. 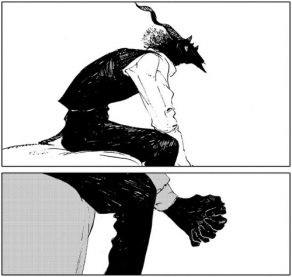 The woods Shiva and her guardian inhabit are the woods as they truly are, the idea of paradise, a barely sustained illusion shattered by even the most minor of intrusions or, as is often the case, by every stylistic decision of author and artist Nagabe. The art style – the heavy use of greys and realistic backgrounds that impart such a sense of place – the character designs – everybody except Shiva is faceless, everyone including Shiva is bereft of the overly expressive details that normally make manga characters so relatable – the paneling – so clean and efficient it often seems lifeless: every element seems calculated to make the manga come off as quiet as a whisper. Dialogue is sparse, exchanges consisting mostly of monosyllablic call-and-response or pregnant pauses and never resolved musings. Action is rare and built up to slowly, hints coming from multiple angles and from multiple threats so that you are never entirely certain what threat will be the first to break. Even the relationship between Shiva and her protector is wrapped in silence: he knows the aunt she misses so dearly abandoned her with no intention of returning, yet remains silent, afraid of what this knowledge might do to his young charge. 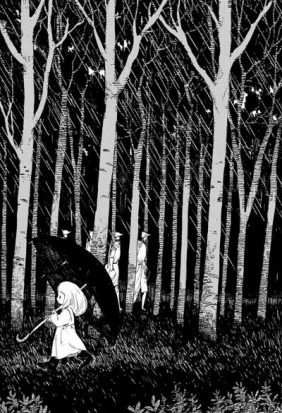 Most effective of all of these tools may be Nagabe’s perfect use of perspective. Though not shy of close-ups and action, he seems to prefer wide and deep shots, and has no problem moving the focus from the characters to the environment in order to convey the eerie stillness of this world. His sense of timing for this is impeccable, so much that a carefully used panel – a single still image – often feels as if it’s capturing hours of passing time. In one particularly beautiful full-page panel, Shiva traipses obliviously by a squad of soldiers deeper in the background. Though the following pages portray the climax of the volume, it is that single panel, hanging silently before the action, that stands as emblematic of what is most beautiful in The Girl from the Other Side. Few comics possess this sense of reserve and poise; few know how to capture the menace of silence so well; few comics are nearly as promising as The Girl from the Other Side.

Demons, Nagabe, Seven Seas Entertainment, Silence, The Girl from the Other Side