“I can’t believe the first game you choose to play after coming back from an overseas trip was American Truck Simulator,” my sister quipped. Detecting a slight note of disbelief and derision in her voice, I couldn’t help but laughed sheepishly, slightly embarrassed by my choice of leisure activity. Having seen me devote hours and weekends to videogames for two decades—mostly titles with elements of unrealistic escapism—she was incredulous that I’ve chosen to wind down with a game that let me drive big, shiny trucks. Not bombastic, Mad Max-esque trucks, outfitted with massive spikes for shoving other vehicles off the road, but an ordinary red truck that you can probably catch a glimpse of when you’re out.

This seems like an experience that is so painfully mundane, just like the events of real life. What will I do next? Will I be playing Job Simulator later, in which I assume the role of a copywriter, churning out copies after copies of marketing collateral for perpetually unsatisfied clients?

To be fair, I would have reacted the same way too, had I the ability to see a few months into the future. I would have scoffed at myself, and then wandered off to spend my time on “worthier” games of other genres. But the truth is that American Truck Simulator was exactly what I needed to end 2016 with: a soothing ride down the open road, with my favorite tunes accompanying me on my longest journeys. 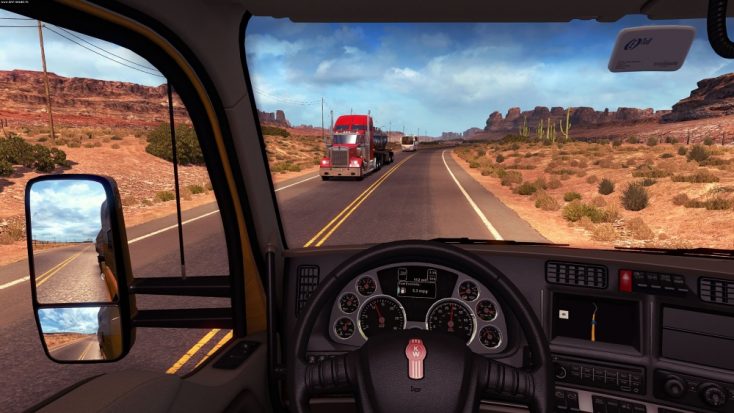 Here is the short of it: you create a profile, pick a name and logo for your company, and are assigned a quick job, where you make deliveries of cargo ranging from office stationary to hazardous materials from chemical companies. Meanwhile, you obey traffic rules, and try not to go over the speed limit; in time, you can buy your own trucks and hire other drivers, eventually turning your passion of truck-driving into a business. Finally, you can even take massive loans from banks and spiral into despair from the looming threat of bankruptcy—just like in real life!

I haven’t gotten that far into the game. Instead, I partake in the pure, simple pleasure of driving, while admiring the greenery and cityscapes around me—an incredibly therapeutic activity after a long day of work. 2016 ended on a rather exhausting note, as I often had to spend late nights working, be it in my full-time job as a copywriter, or as a part-time writer struggling to land more gigs. Aside from my terrible parking skills, which can be a huge source of frustration, American Truck Simulator is largely a comforting ride. During these sedate trips, I can let my mind wander, think big existential thoughts about life, and listen to albums and music I needed to catch up on.

In real life, I have no driving experience, nor do I have any interest in automobiles and other vehicles. My sense of direction is absolutely garbage, and I would probably end up feeling more stressed out about driving than enjoying the journey itself. Traversing through endless waves of asphalt is an experience that is completely alien to me, but American Truck Simulator gave me a glimpse of that quiet splendor. If anything, the game proves to be the perfect escape from a chaotic world.