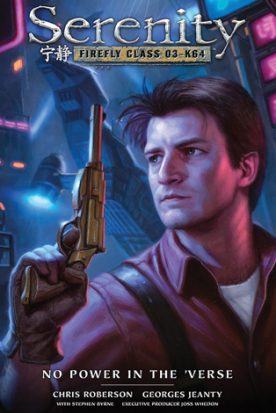 In the fall of 2005 I forced my father to go with me to the movies to see Serenity. I just called him to see what he thought and he doesn’t remember. I, however, remember vividly. I remember the feeling of awe at the opening, the deep sorrows that it took me to, and the quiet, subdued sense of finality it gave me.

And maybe that’s where things should have ended for me. There’s nothing wrong with Serenity: No Power in the ‘Verse #1. It’s a solid book that sketches in the infinite expanse that comes after Serenity, the movie, and the other comics. But for me, it’s a unnecessary step back into familiar waters.

Anyway, Chris Roberson does a wonderful job capture the tone and timbre of Whedon’s characters. The story moves briskly from moment to moment. It gets to everything in short order too. Mal proves to be a principled rogue, River performs some acrobatic stunt, Simon is aloof and hurts Kaylee’s feelings, Inara has some secret from Mal, and Jayne is an ass.

It’s all there, in spades. It feels just like a Firefly episode. Georges Jeanty does a great job interpreting the actors, the set, and the panels are laid out well.

But something feels off.

It’s a doppelganger of a Firefly episode. There was always a loose continuity between episodes but never any true multi-part arcs. But arcs and multi-issue stories are the life blood of comics. The characters look good, great even, but they don’t move.

I wasn’t expecting magic but No Power in the ‘Verse feels a bit hollow. Maybe I’m putting the series on a pedestal. I almost certainly am. But I don’t think it’s worth counting out this story yet. It’s a solid go at universe that means a lot to its fan base. It’s just maybe not the go they’re holding out for?

I loved *Firefly*. It was a fantastic show that was silly, heart breaking, and wonderfully weird at times. It not being on the air is a crime against nature. However, Serenity felt like a bittersweet cherry that we ever never supposed to get in the first place. It’s a good not great series that put a nice ending on the show.

So, if you liked the show and the movie and are desperate for more, No Power in the ‘Verse is a great place to keep the party rolling. If you’re like me and felt like the film closed the gap, maybe wait for this one to wrap before coming too close. 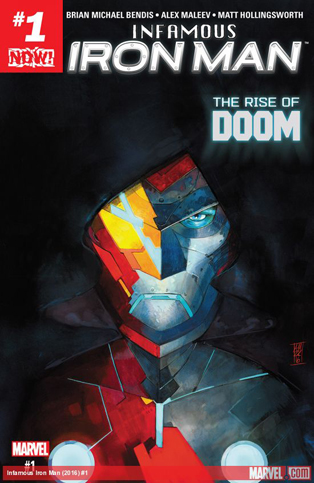 Infamous Iron Man # 1 begins with a flashback to a presumably pre-Dark Reign Marvel Universe. The Illuminati’s sinister counterparts, the Cabal, sit and wait for Norman Osborn’s arrival. In this scene, Parker Robbins, The Hood, asks Doom what drives the Latverian monarch. Doom is already the ruler of his own country, he beat the Devil and has dabbled in all manner of dark magic. So, what is it that keeps Victor Von Doom going? Doom’s response is to banish the Hood to India. The book then moves to the present day, where Doom nonchalantly rescues SHIELD Director Maria Hill from Diablo’s kidnapping plot. Doom, no longer the man hiding his scarred visage behind a metal mask, is a man in need of reinvention at this point.

Before this issue, indeed, even before Doom popped up in Invincible Iron Man as a supporting player, he was the big bad of one of the best Marvel crossovers of all-time; Jonathan Hickman and Esad Ribic’s Secret Wars. In that series, Doom along with Molecule Man and Doctor Strange saved what remained of the Marvel multiverse and built Battleworld from its remains. Doom protected his power and his secrets, but the residents of Battleworld were treated much better than if they were under the thumb of, say, Apocalypse or Ultron. Doom was not without his own pettiness though. For all the good he did saving what he could, he made sure to build a world without his rival, the accursed Reed Richards! He also made sure two of Reed’s best friends, the Thing and the Human Torch, were nowhere to be found. Doom saved Reed’s family, he just used his power to make them think they were his.

Long story short, Reed Richards returned and defeated Doom. Reed and his family restored the Universe (mostly) and removed themselves from the world (for the time being). Before he left, Reed even took the time to restore Victor’s face. When Secret Wars ended, Victor was no longer Doctor Doom and he had the whole world in front of him.

Bendis and Maleev use this issue to kick off Victor’s journey. Tony Stark appears to be dead, so Doom uses his knowledge of Stark’s tech and his own to take up Iron Man’s mantle. His relationship with Reed doesn’t pop up in this issue, but the Thing does (and he’s an agent of SHIELD). This issue is a lot of set up. Doom isn’t in costume until the end, but Bendis and Maleev are a helluva creative team. Their take on a Victor Von Doom in search of new meaning has a lot of potential and I’m along for the ride.

Supernatural Encounters of the Strange Kind