I didn’t get to do much reading this past week. I’ve been dealing with some family health issues the past two months, so my schedule’s been erratic at best – so erratic in fact that I completely missed that last week was the 5th anniversary of Last Week’s Comics.

I want to take a moment to say thank some folks a week late. First, thank you for reading this column. Thank you for caring what we have to say about comics. I look back at editing original LWC writer, Brian Bannen, and I look how that column has evolved over the past five years and I can’t help but smile.

Second, I want to thank Stu for giving us all a place to talk about the comics we love and hate. It’s been a blast! I want to thank Rob Roberts, who edited this column for a helluva long time. Without Rob and Brian, there would be no Last Week’s Comics today. Thank you to artists, writers and publishers who have given us a chance to read your work in advance of publication.

Finally, and most of all, I want to thank Brian Bannen, Jill Scharr, Michael Edwards and Sal Lucci. You’ve all done some damn fine work on this column and it’s been a privilege to see your work before anyone else!

Speaking of artists and writers letting us see stuff, I don’t have a formal review yet, but I just got to read The Doorman # 2 from Heavy Metal and hold crow, you guys, this comic is a blast!

Got get # 1 and preorder # 2 already. The world of The Doorman centers on those that mind the cross dimensional doorways between planets across the universe. They’re a union of intergalactic porters known as Doormen and they are all being murdered. The titular Doorman of this series is Henry Clay Waters. Henry gets drawn into an intergalactic conspiracy on the day he’s supposed to retire. It’s fun stuff and I’ll have something more formal next week or so.

Batman is back, and he’s got a new suit! Sorry for no trigger warning, but if you’ve been following the Batman title at all, you knew it was coming. The new suit looks mostly like the old (there’s some extra piping around the bat symbol) but unfortunately Batman didn’t go back to wearing his underwear on the outside. Jim Gordon’s Batman Beyond-esque outfit was pretty sharp, but I prefer a more traditionally garbed B-Man.

Issue #50 is double-sized, sort of, and for that we’re allowed to pay $2 more. We finally get the conclusion to the almost year long Mr. Bloom/”Superheavy” arc. The story is unique and interesting, and fits the high standard writer Scott Snyder has set for himself; even if the last few issues dragged a bit.

So how does Bruce Wayne go back to being Batman, after being in denial for ten issues or so? Apparently, thanks go to a Bat Re-Bigulator of sorts (I 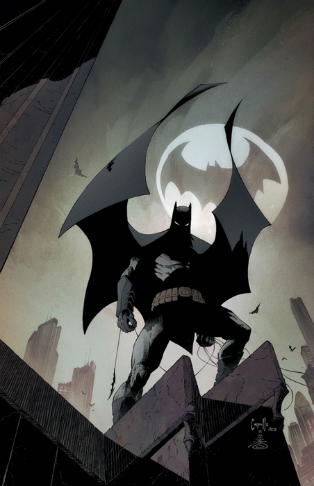 should trademark that) that almost killed Wayne in issue #49. The gist is that the ever-prescient Batman made a machine to cram his mind into the mind of the next appointed Batman, in case mere mortal Wayne might be dying (something I recall Neil Gaiman touching on in his “Whatever Happened to the Caped Crusader” story.)

The Bat Re-Bigulator is so dangerous and powerful that it has destroyed the minds and ended the lives of some human guinea pigs. But Bruce Wayne is no ordinary man! Now that he wants to admit he was once Batman, and is ready to be Batman again (regardless of a simpering Alfred) nothing will stand in his way. Wayne does get a nosebleed, but that’s not so bad. Apparently he’s fully physically restored (and clean-shaven along the way?) with no scars, broken bones or bad knees that the Batman of last year might have had.

Mr. Bloom has proven to be quite the formidable foe, maybe even worse to the city of Gotham and it’s citizens than the Joker. The seeds Bloom planted in himself and Gothamites make them grow enormously, gaining extra strength although making them physically deformed and mad for power. Jim Gordon, on death’s door (and with a helicopter door handcuffed to him… no spoiler from me here, read the book!) gladly accepts the new-old Batman’s help, and does his part to get a super power dampener to overpower Bloom’s seeds and shut down the “strange star” that is threatening to destroy the city.

Man, that is Superheavy! And a whole lot of science, with a tad too much exposition. But Snyder makes it work as one would expect, a combination of his writing prowess and good old-fashioned suspension of disbelief. Greg Capullo is still my favorite Bat-artist of the New 52, and he flexes his muscles with the odd contortions Mr. Bloom takes as he grows in size and strength. Yanick Paquette steps in for the few pages of the epilogue, and while he’s no stranger to the Bat-books, his feel doesn’t give me the warm fuzzy feeling that Capullo’s art does.

So where do we go from here? Batman (the book) is just off two almost year-long (each) stories where Batman (the super hero) is tested beyond his powers and Gotham (the city) is brought to it’s knees. Snyder excels at these types of expansive story arcs, but I feel a breather is necessary, at the very least to keep up the illusion that life does go on, that Gotham can be rebuilt to a point where another villain can lay waste to it again. Lather, rinse, repeat may be the cycle, but let’s hang out in the first two stages a bit. 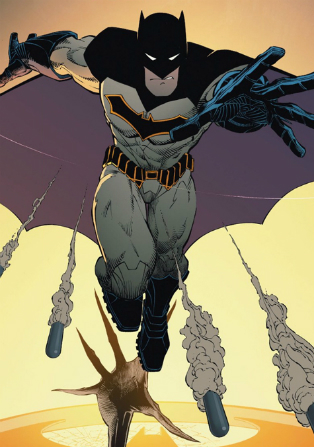 Young Duke Thomas carried some of the B-story of “Superheavy” and it certainly seems that DC is teasing that he could be a future Robin, but I think it’s too soon to answer the Robin question that will always shadow Batman. (If we’re going to see another person take on the Robin mantle, I was hoping for what’s-her-face, the hacker with the piercings and blue streaks in her hair.) I wonder if Daryl Gutierrez will still have a role on the Bat-team, now that Gotham P.D.’s Batman project is closed down. And also (partial spoiler) the whole Mr. Bloom relation. I vote “no.”

It looks like Gordon is going back to being police, and since Batman really is selfish and has tunnel vision, he’s practically prying Gordon from his hospital bed despite Gordon’s brush with death. Bats does give Gordon a good rah-rah speech in thanking Gordon for his service and recognizing that Mr. Bloom is to Gordon as the Joker is to Batman, but someone needs to tell Bats to slow his role a bit (simpering Alfred, where are you now?)

So next month’s issue #51 will be a breather of sorts, as it will be the last Snyder/Capullo Batman book. Any new team is going to have big shoes to fill, as Snyder and Capullo are the best Bat-team ever, maybe probably, and I hope that the forthcoming issue #52 doesn’t take readers from zero to sixty right away. Fingers crossed, I’m feeling cautiously optimistic, but things will be weird for a while.

A Toast to Reconciliation

10 Cloverfield Lane – Hell is Other People