Stranded in a hostile environment, stripped of everything but the clothes on your back, forced to fend for yourself against a world hell-bent on your demise. How would you fare in such a dire situation?

This is the question at the heart of the open-world survival game. The popularity of hunting, foraging and crafting systems have found their way into titles big and small. Crafting especially has cropped up in everything from first-person shooters like Bioshock to run-and-gunners like Mercenary Kings to action-RPGs like The Legend of Zelda: Skyward Sword.

But just how realistic is it? Could we rely on videogame crafting to keep us alive if the apocalypse hit? Is the science behind it sound, or is it a bunch of bologna?

As the catalyst for the crafting boom, let’s start by looking at Minecraft. Keeping with its simple aesthetic, most of the recipes have the player arranging base material in a rough outline of the tool they want. A rudimentary approach, but feasible for the most part: hatchets are made from stone and wood; arrows from flint, sticks and feathers; bread from bundles of wheat.

As items increase in complexity, though, the recipes start to take liberties with their groundings in science. Wood and diamond conjure up a working jukebox. Redstone – a material with seemingly limitless utility – transforms a few lumps of iron into a compass, a handful of gold bars into a functional clock. It’s more magic than science, and runs counter to the logic at the heart of the game.

Don’t Starve plays even looser with its scientific framework. Torches and campfires are fueled by cut grass, which actually burns quite poorly. Worse, the compasses in Don’t Starve are made from paper and gold, which flies in the face of basic science. Pure gold is not magnetic, and even when laced with iron impurities, it’s still too weak to function as a compass.

Speaking of navigation, I wouldn’t trust the map in Ark: Survival Evolved, either. The game uses thatching place of paper, despite the medium’s dark color and uneven texture. Ark does get one thing right, though, and that’s its use of fiber and thatch as lashing. Many crafting systems ignore the 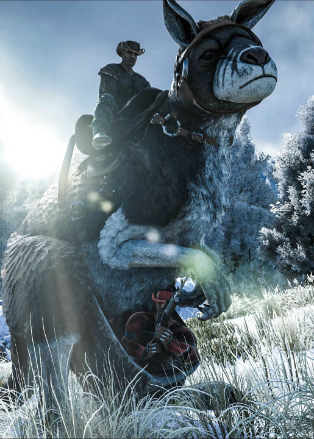 means by which components are held together; wooden planks magically adhere to form ladders, leather armor takes shape with no need for stitching, axe heads stick to their shafts through sheer force of will.

In contrast, Ark’s fiber-tied water skins and thatch-lashed pickaxes establish a stronger scientific foundation – even as you hunt down dinosaurs with grenades and assault rifles.

Likewise, NEO Scavenger takes a commendable approach to infection. Groundwater carries disease, and must be sterilized by boiling it before it can be safely consumed. Similarly, rags used for bandages need to be boiled clean to avoid infection. Since waterborne diseases account for approximately 1.8 million deaths a year, sanitation is a vital skill to master.

H1Z1 is equally praise-worthy for its makeshift flares. The flares are crafted by combining fertilizer, sugar and cloth, a recipe grounded in real-world science. The ammonium nitrate in the fertilizer, when combined with a fuel like sugar, produces combustion capable of burning away the night. Even though most garden-variety fertilizers no longer contain the levels of ammonium nitrate for health and safety reasons, the core chemistry is sound.

To cap off the zombie-fueled science, Project Zomboid deserves mention. Unlike many of its contemporaries, it incorporates the nuts and bolts – or, more accurately, the hammers and nails – of construction into its recipes. Even better, it includes the craftiest bit of crafting I’ve so far encountered: smoke bombs constructed from cold packs, newspapers, and ripped sheets. While this may initially seem absurd, it is backyard science at its best.

Of course, no discussion of DIY would be complete without mentioning the greatest invention to grace planet Earth: duct tape. Thankfully, The Escapists recognizes its importance; nearly all recipes in the game require a roll of the sticky stuff, from disguises to weapons to makeshift tanks. Scientifically, then, there can be no question that The Escapists offers the most realistic survival experience. Next time you’re packing your emergency supply kit, just cram it full of duct tape. In the wise words of Mythbusters‘ Jamie Hyneman, “Duct tape isn’t a perfect solution for anything. But, with a little ingenuity… it’s an adequate solution for just about everything.”