There is a certain kind of mystique around Microsoft’s HoloLens. The company still isn’t allowing anyone to record their own footage or even take photos of the device. Instead we rely on live stage shows which paint it as a tech revolution. This year’s E3 showed Lydia Winter and Saxs Persson playing a projected Minecraft on an empty tabletop in what Microsoft is calling “mixed reality”.

But like most things that seem too good to be true, HoloLens kind of was.

Voices like Adi Robertson, from The Verge, and famed game designer Cliff Bleszinski would say that your field of vision in the HoloLens is painfully small. Kotaku described it as being the size of a deck of cards held at half an arm’s length. Anything outside that space faded out of existence. It begs the question: what good is existing in a hologram clad world if you can only see what’s directly in front of you?

As a response, Microsoft reigned in the unrealistic grandeur and focused on showing a much more realistic side of the HoloLens.

After a period of silence, yesterday Microsoft showed a demo of their first shooter to be set in mixed
reality. Project X-Ray is a game with a simple enough premise: there are robots, you have a sweet Mega Buster strapped to your arm and robots must die. The downright jaw dropping twist here is that the game takes place in your living room. 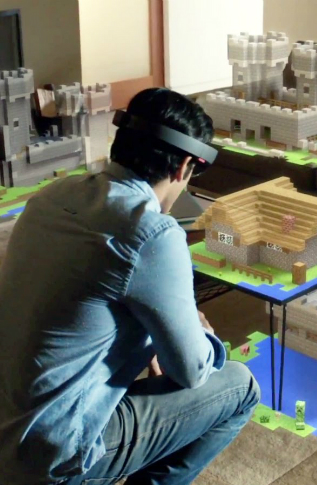 In the demo, huge carriers tore through the existing walls and injected robo-baddies on stage like a syringe. The man playing, named simply “Dan”, moved around the entire room, avoiding enemy fire and attacking in just about every direction. The level of sophistication of the holograms was incredible; they appeared to tear holes in the walls and even reacted to furniture.

This is where the misleading nature of HoloLens stage demos pops up again. Microsoft presented the experience of playing Project X-Ray as a completely new world invading your house. What they didn’t mention was the limited field of vision Dan had.

The presenter explained that the HoloLens made use of stereo sound, implying that Dan could respond to an enemy creeping up behind him, but that is a far cry from what the demo is trying to conjure. And honestly, what we all want.

The mystique is ebbing away from the HoloLens – Microsoft has started taking applications for developer kits, which will run you a whopping $3,000. The road up to now has been wrought with questions, but now that’s coming to an end. It’s a bittersweet feeling to know that this seemingly magical piece of hardware will have to leave our imaginations and what it can and can’t do will be well defined. Alternatively, when people finally get their hands on it, it only means that this piece of future tech will only get better.