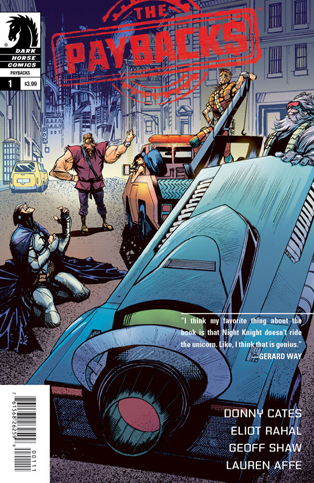 Dark Horse had me at the elevator pitch for this book. The Paybacks are a group of repo superpeople made up of formerly bankrupt superheroes. In Donny Cates and Eliot Rahal’s world, heroes take out loans to afford all of their lairs, crime fighting equipment and unicorns. When they can’t pay back the loan, they get pressed into service – working off their own debt by helping to repo other delinquent superheroes’ very expensive toys!

The first issue shifts between two plots. The first plot involves a team of Payback’s at the Primrose Mansion, home to London’s own cowl-wearing crusader, Night Knight. It’s Emory Rains, Bloodpouch, Skisquatch, and The Soviet Nunchuck’s job to repossesses everything from Batman-esque vigilante (including his precious unicorn). The second plot deals with Miss Adventure and her team of Paybacks. They’re tasked with collecting all of armored super hero Battery’s toys. Miss Adventure’s job turns into a disaster.

Both groups are organized by a man named Driver. He’s a cranky and mysterious fellow who drives their repo van. He and the team’s medic, Doctor Blaqk, give off a real weird and meta vibe that reminds me of the cult classic, Repo Man. The van isn’t just a van, the back door is some kind of interdimensional portal. Also, Doctor Blaqk is aware we are reading this comic. Paybacks #1 revels in its form and crumbles the Fourth Wall. It’s a hoot!

Geoff Shaw’s art impressed me. Cates and Rahal’s script pokes fun at a lot of superhero tropes that span superhero comics’ history. Shaw ties the myriad of influences and draws a world that feels consistent and lived in. He makes all these styles exist in the same time and place. Lauren Affe’s colors are fantastic too. They sell the aesthetic consistency and govern the book’s mood.

The Paybacks exists in the same tonal orbit as Damage Control and Top 10.There’s strong character work in this book, and it’s a damn funny read. I mean, Bloodpouch looks like he walked straight out of Bloodstrike. You can practically rub the blood. Also, who doesn’t want to read a comic with a dude named Soviet Nunchuck in it?

I rest my case. 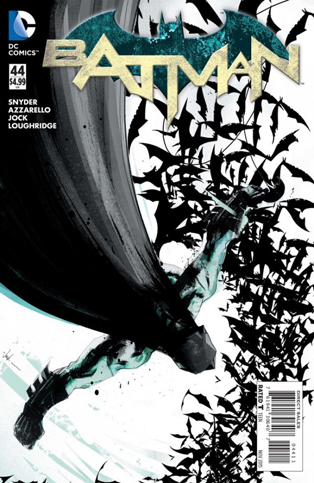 I went into this issue with a shitty attitude. Our cover price this month is a staggering $4.99! Call me petty, as it’s only $1 more than usual, and we get 30 pages of action instead of the normal 22, but these kind of “surprises” don’t make me happy. On top of this, Batman #44 takes a break, somewhat, from the Mr. Bloom story for what turns out to be a loosely associated prequel. At least this wasn’t delivered as a separate “One Shot,” my least favorite and least useful comics surprise-slash-fan gouge.

It’s games like these that make me lean towards getting out of monthly issue buying and waiting for the trade paperback collection, as trades seem to come out at an accelerated rate these days. Also, I can get these for free from my public library (which has a pretty sweet collection of graphic novels and trades.) So, what’s a cranky comic book fan to do?

Reading issue #44, my temper cooled a bit. Scott Snyder delivers a compelling Bat-tale, as usual. And this month, he teams with Brian Azzarello, who has done his time in the Bat-verse. Plus, you know, 100 Bullets. I’m not sure where Snyder’s and Azzarello’s contributions to issue #44 begin, end or intertwine, but I wouldn’t mind Azzarello having his own run at one of the Bat-titles.

I’ve been so accustomed to Greg Capullo’s art being paired with Snyder’s writing in the New 52 that I was both taken aback (because why not nitpick everything?) and happy (let’s go with that!) to see someone else’s rendition of the story. I’ve liked every Bat-thing I’ve seen from Jock (especially his work with Snyder in the pre-New 52 “Black Mirror” arc) so there was never any reason for me to worry. Jock’s art has a gritty, scratchy quality that highlights the crime story in a Bat-tale. Lee Loughridge’s colors are equally important as Jock’s art, so I’m glad to see this acknowledged by having his name on the cover.

Batman and Detective Comics have been working seemingly in tandem these past few months, since Jim Gordon took over as Batman in the aftermath of “Endgame” and Batman Eternal. Sure, each title has it’s own villains, but both titles have focused on Gordon getting his sea legs as Batman, and adjusting to being at the whim of the new bureaucracy in Gotham. Last week’s issue of Detective seemed to end that book’s first arc with Gordon still under the mechanized cowl, so I was interested in where this week’s Batman would go, as the Mr. Bloom story seems to have plenty of room to grow, pun intended. I wanted to wait until Batman #44 to make up my mind, hoping to get another perspective.

Batman doesn’t give me another perspective on Detective, except to feel like the two books will part ways. I’m definitely interested in seeing where Snyder will take the memory-less Bruce Wayne. I can’t get a feel on where Detective is headed. So I’ll keep on keeping on buying both titles for the foreseeable future, reserving the right to complain, nitpick and cheer any time I feel.