My name is Jan Havickszoon Steen and I died on February 3, in the year of our Lord Jesus Christ 1679.

In life, I was a painter and a publican of some repute. In death, I have toiled at a good many things. Greatest of these, perhaps, are my exertions as spirit guide to Meester David Duguid, cabinet maker and medium, lately of Glasgow.

Three men and four women collect around a circular table, only just visible in the light of a far off gas lamp. Their palms are laid flat on the wood. Few objects clutter the room besides empty vases and journals with titles like Light and Medium and Daybreak, though pencil, paper and painting supplies have been laid out on the table.

Conversation has stopped. The room is cold and still. The outline of an eighth man can just be seen. He sits in a chair that hangs in the air above the table.

Every living person is subject to spirit influence, yet only one in seven has the mental faculties and freedom of will to be a medium. I do not know if it is genetics, nurture or some other extra-physical endowment that determines a person’s capacities in this respect, but Meester David came from a family of mediums. His brothers, Robert and Alexander, both showed talent as spirit conduits from an early age, and when, in 1865, Meester David attended his first séance at the home of Mr. Hay Nisbet, distinguished publisher and patron of Glasgow’s spiritualist community, a rare talent was uncovered. 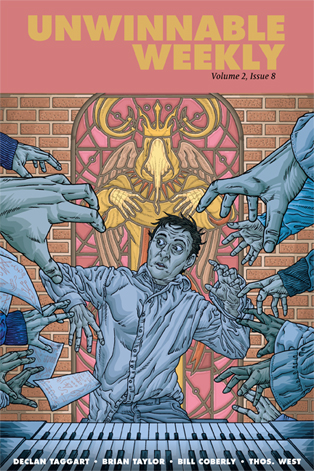 In my experience, mediums begin imperfectly and mature in fits and starts. Even the noblest, in their first sessions, are limited to inklings of the spirit world. Sometimes they are compelled to sing or speak or dance. The messages they convey are garbled, impressionistic, fragmentary.

I am told that Meester David’s first séance was electric. His veins and arteries were traversed by an otherworldly lightning that at once chilled his body and scorched his cognitive matter. When Mr. Nisbet’s daughter, herself an automatic writer, placed her hand on Meester David’s arm, she freed him from his petrified state, and he picked up a pencil and began to sketch.

The outline mutters garbled nothings in the dark until the sounds coalesce into murky, Greek sounding signifiers, of what, you do not know. The bones in its old hands creak and paint slaps onto card. The sounds are slower than they were 10 or 20 years ago. Perhaps even just one or two.

15 minutes pass and something drops onto the table.

You’ve been reading an excerpt from Unwinnable Monthly Issue 60.