This is a reprint of the letter from the editor in Unwinnable Weekly Issue Fifty-Six. You can buy Issue Fifty-Six individually now, or purchase a one-month subscription to make sure you never miss an issue!

When Howard Hawks was working on adapting Raymond Chandler’s The Big Sleep for the big screen, the screenwriters (which included William Faulkner) couldn’t figure out who killed the chauffeur. Desperate, they cabled Chandler, who replied back, “Dammit, I don’t know either.”

This anecdote came to mind every time I read an article or heard a friend complain that the second season of True Detective, which wrapped up this past Sunday, was too complicated to follow.

Of course, The Big Sleep (both the movie and the original novel) is one of the most sprawling, complicated and convoluted examples of a hard-boiled mystery. It is also regarded as one of the very best. In fact, hard boiled thrives on labyrinthine plots and elaborate conspiracies. The world these stories inhabit is one of boundless corruption  where good men are left cynical, world weary and beaten down by the tides of societal decay.

A simple mystery wouldn’t cut it. The hard-boiled world is meant to be overwhelmingly dishonest, a system of crooks, both big time and small, spread out through all walks of life. It is self-reinforcing moral turpitude. No matter what our hero accomplishes, no matter what murders he solves, we must be left with the feeling that a monolith of interwoven crimes remains, impossible to entirely dismantle thanks to the money and power of its uncountable architects. Sure, the story boggles the mind. That’s the point.

In this way, plot – the mere charting of events – is irrelevant to the hard-boiled mystery. The villains and their deeds are largely interchangeable. Remove one, another will appear. This puts the focus on the characters and their actions, the lengths they will go and the consequences they will face once they get there.

The second season of True Detective riffs on a lot of things – Hitchcock, Lynch, noir, Los Angeles, the effect of hard-boiled and noir cliches on our perception of Los Angeles – but most of all, I think of the show as a thoroughly contemporary love letter to Dashiell Hammett and Raymond Chandler. That this is a dense, impenetrable story in their style is visually conveyed in the shifting layers of the show’s opening credits. 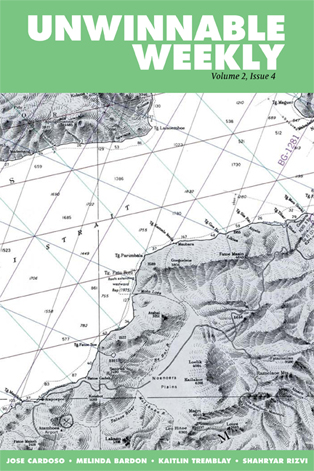 Whether they pass or fail those tests? That’s why I watched True Detective Season Two.

This week, our cover story is given over to Kaitlin Tremblay’s thoughts on the similarities between videogame world maps and poetry. Jose Cardoso also waxes poetic, with a tribute to the late Satoru Iwata in verse. Melinda Bardon’s Unpickleable makes a sweet return with an introduction to shrubs – a way to pickle berries. Finally, Shahryar Rizvi reveals interesting parallels between the medieval lineages and rivalries that constitute Crusader Kings II and the modern politics of Pakistan.

Huge thanks to Gita Jackson, who I deputized as Unwinnable’s poetry editor this week. I have no head for verse and she was a huge help!

Hope you enjoy and have a great weekend!