So there I am at a restaurant in Manhattan, frowning at my phone, retweeting everything I can see about the untimely passing of Roddy Pipper. I got the news moments before and it hit me surprisingly hard.

But as shaken as I was by the news, I was out with my fiancee and my future in-laws. I apologized for suddenly being so fixated on my phone. “Roddy Piper died,” I explained.

“Who is that?” asked Daisy’s father. I shook my head, “Wrestler. Not a big deal.”

I wish I hadn’t said that. Roddy Piper was definitely a big deal and the world is a dimmer place without him in it.

“Rowdy” Roddy Piper was the first wrestler I hated.

It was 1985, and Hulk Hogan was about to defend the WWF heavyweight title against Piper, live on MTV. Hogan, of course, was the Real American. A hero. Loved mom, apple pie, and rock music. And Hogan was once again going to have to defend America from its most hated rival… Scotland. Piper was a brash, violent cheat, who wormed his way into the main event scene by attacking Capt. Lou Albano, Cyndi Lauper and her manager David Wolff. At 12 years old, The War to Settle the Score seemed like a bigger fight than Ali/Frazier. From Twisted Sister’s Dee Snider to Gloria Steinem, from Ted Nugent to Geraldine Ferraro, from Jimmy Snuka to Kenny Loggins, it seemed everyone wanted to see Hulk Hogan exact his revenge and defend the Rock & Wrestling Connection.

Of course, the match, which MTV VJ Alan Hunter described as having “social, political and artistic implications far beyond any wrestling match in history,” ended up as a linchpin to the wrestling boom. The outcome of Hogan’s match with Piper would lead to Wrestlemania and the success of that event would turn the WWF into a global phenomenon. It all came down to Piper’s charisma. The perfect foil at the perfect time. Piper himself pointed this out when he arrived in WCW over a decade later to challenge Hulk Hogan: “Do you think they would have loved you so much if they hadn’t hated me?”

The truth, of course, is that we loved Piper as much, if not more, than Hogan. He was a legendary interview and it’s hard to pick one episode of Piper’s Pit that stands out above all the others because they were all classics, whether he was interviewing former adversary Greg Valentine, smashing a coconut into Jimmy Snuka’s head or trying to embarrass jobber Frank Williams. He was unafraid to be blunt when needed. A 2003 interview with Bryant Gumbel for HBO’s Real Sports, where he admitted to being an addict who hated what he became as a wrestler, temporarily cost him his job with WWE. And, of course, we already know his status as one of the better B-movie actors of the 1980’s.

As hard as it is for me to pick a favorite Piper interview, picking a favorite match is easy. His dog collar match with Valentine at the NWA’s inaugural Starrcade is a brutal affair that sees the wildly popular Piper seek revenge on Valentine for injuring him a month before, all growing out of an often repeated wrestling trope where Valentine’s running buddy Magnificent Muraco attacked Piper’s commentary partner Gordon Solie and Piper needed to avenge Solie.

My first introduction to The Rowdy One was well before his mix up with Hulk Hogan. I have always loved the villains and was attracted to Piper after seeing one of the early Piper’s Pit episodes on TV. The episode that really struck me was his interview with Jimmy Snuka. Piper was the best talker in the business. He made you believe that he really hated his guests. He worked off the cuff in those days and went with his gut instincts and made many of what would seem to be ordinary interviews into extraordinary events.

In his original interview with Snuka, he barely gave the man a chance to speak, so they had a follow up. He hands Snuka the mic to give him his moment but abruptly cuts him off and dives into the insults. He pulls tropical fruit out of a bag to make Snuka feel “at home”. And that’s where the infamous coconut comes into play. When Jimmy least expects it, Piper smashes him in the head with the coconut, dazing Snuka, and then smashes him in the face with a banana. Talk about shocking. In a time where people didn’t know wrestling was staged, this segment was balls to the walls. It set up a feud between Snuka and Piper and help elevate Piper to the main event.

While Roddy didn’t have the moves as other guys did, he had the mouth. Although he is probably best known for the eye poke, he also put the sleeper hold on the map. He is probably one of the few wrestlers to not hold the WWF World Heavyweight Championship and be as popular as he was. 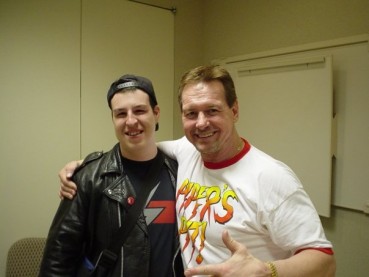 I had a chance to meet Roddy in the late 90s at a famous NJ convention. I was on line with my friend and his brother, who were both large guys with some Eskimo blood in them. I mention this detail because when I got up to the table to talk to Piper, he looked at me and said “Holy cow! I didn’t know the Wild Samoans were here!” After a brief conversation, I told him that I wish I brought a coconut with me. The he reaches around and grabs one out of his bag. Honestly, that left me speechless.

I’ve met a lot of wrestlers and celebrities in my life and I must say that Roddy Piper was a gentleman. I got a photo with him and he turned to me and said “Lookin’ good brother”. Beyond him being in my top 3 favorite wrestlers, meeting him in person was just as great as seeing him wrestle live.

I also have to also make a special mention of They Live. After seeing it so many times through the years, I can’t imagine another person who would have fit the part better than Piper. At the height of his wrestling success, he had the chance to star in one of the best cult science fiction movies ever. Thank you Roddy Piper for all the years of entertainment. I hope they have enough coconuts wherever you are.

I’ll admit it, I have never been a fan of wrestling. There’s a better then average chance I’ve seen a match or two, but only due to the overwhelming presence amongst my friends during the Wrestlemania heyday. I just saw through all the color and fakery and just couldn’t ever get into. So my real introduction to Mr. Piper was They Live. It was the fall of 1988, I was a freshman in college, November, still trying to figure out my place. I went to see the film by myself, I mean, it was Carpenter after all.

Carpenter caught lightening in a bottle with his casting of Piper. Equal parts bombastic wrestler, Bruce Campbell and undeniable big screen charisma, Piper was the shit. The man you’d want on your side in a dark alley. After that I had to track down Frogtown. He would go on to star in other films, but no other director was able to capture that Piper essence of love, hate, good guy, bad guy, bad ass like Carpenter had.

It would be a few years, but his character, his portrayal began infecting Hollywood far and wide. Piper’s ability to pull off macho cheese lines like bubblegum that equally excited you, thrilled you and made that little school boy inside of you giggle.

Without Piper, there is no Ash “Give me some sugar, baby” in Army of Darkness. No hasta la vista baby. And ultimately, absolutely no Duke Nukem.

But in the end, regardless of every thing, it all boils down to (and I borrow a thematic issue from Chuck Moran), on July 31st a wife became a widow and four children lost their father, tragically and way too early. And that’s what saddens me the most.

Godspeed Mr Piper and my sincerest condolences to the immediate family, the wrestling family and to all the Hot Rod fans around the planet.

First and foremost, it’s sad for the family and friends of Roddy Piper that he died.  But, to hardcore pro wrestling fans, seeing a wrestler live to 61 is amazing. Piper was on the road for the better part of 40 years and he wasn’t afraid to talk about the lifestyle that sent so many of his brethren to an early grave. Piper didn’t celebrate it, he just told it like it is, not unlike so many of his on-screen promos. Perhaps most notorious is the 2003 “Death in Wrestling” piece on HBO Real Sports with Bryant Gumbel (which may or may not have cost him his job at the time.) Quite presciently, he stated in his interview that he wouldn’t live to see retirement at age 65.

I was fortunate to come of wrestling age in the mid-1980s, during the great WWF pop culture boom. Piper always seemed like the top heel, even when he wasn’t in the main event. As a kid, I could tell there was something special about him, and noted that he was the only bad guy that some people would actually cheer. Fast forward to the mid-1990s and thanks to the burgeoning internet, I was “smartened up to the business” and learned that Piper had a career before his WWF stint. Classic matches that are too numerous to mention, but the long and the short of Piper’s greatness is captured in his dog collar match against Greg Valentine at the inaugural Starcade.

So let’s remember the man that cut many amazing promos (even the questionable ones… say Wrestlemania VI,) his many joyously incoherent rambles (most of his WCW tenure) and a fine film called They Live. Look at the world once more through Piper’s eyes, and you can’t un-see the truth. Piper had long been an advocate for remembering the fallen, and now he joins his ring brothers and sisters in an elite hall of fame.

John Carpenter said that he cast “Rowdy” Roddy Piper in They Live because “Unlike most Hollywood actors, Roddy has life written all over him.” It’s such an amazing, odd and subversive film that condemns consumerism and also features a six minute fight scene and Piper telling an old lady she’s ugly. I’m constantly going back to it, and over the years it has become one of my favorite films of all time.

Where to start about the wrestling? He was the most likeable heel since Ric Flair. I hated him with every other kid in 1985 because we were supposed to, but as I grew older Piper became my favorite wrestler because he carried that life experience better than anybody, and smiled cockily while doing it. He was very charismatic in and out of the ring, plus he had the ability to shut down anybody on the mic. Just watch any of his Piper’s Pit segments for an example.

Before this unfortunate announcement I was thinking what Piper had been up to lately, and if a return to the ring or acting was in the cards. It’s a shame what the answer is now, but like Piper said in his HBO Real Sports interview with Bryant Gumbel he wouldn’t live to see 65, a sadly true statement but not a surprising one from a man who understood life, and had it written all over him.

What Kids These Days Think About Videogames, Vol 2