I’ve never really had a Christmas like the ones on TV or film. I’ve never trekked hundreds of miles to make it home for the celebrations. None of my family have ever been caught in a snowdrift, and I don’t think anyone’s ever raised a toast at any Christmas dinner, for anything.

My Christmases have never been bad, but they’ve never been cinematic, either. They’re more a tradition to uphold, rather than a day to celebrate. When you live under an hour away from most of your family, Christmas is less of a cherished occasion; it’s more of a “how come I’ve not seen you the rest of the year?” kind of situation.

But every year we travel to my aunt’s house. We have turkey with all the trimmings, my Gran gives me a couple of stacks of my favorite dark chocolate bars and everyone casually makes fun of me because I’m the youngest and the nicest. Then we play the damn Logo Board Game.

It’s not a bad board game, really. There are cards full of questions about the logos of certain companies and products, and when you answer enough of them right, you win. That’s it. Despite its simplicity, though, I’ve become more and more against The Logo Board Game over the years. 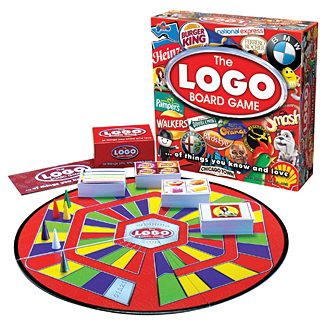 I’ve grown to loathe The Logo Board Game, despite its innocuous looks and inoffensive gameplay. But not for how it plays – I hate the game for what it stands for.

Throughout 2013 I have somewhat rediscovered the joy of playing board games. For the first time in my life, I’ve played and enjoyed games that weren’t Monopoly or Clue, or even Scrabble. I’ve loved every moment of my exploration of a whole new world of gaming with depths I didn’t even know existed.

But The Logo Board Game isn’t interested in being new, or interesting, or even being an actual game. Instead, it rewards rote memorization of your grocery errands, TV advertisements and billboards that flash by while you’re driving.

It’s a marketer’s dream: a game that not only encourages careful recollection of each aspect of the product, but a game that also facilitates players chiding each other when they don’t remember. See? You would have won if you’d remembered how many herbs and spices KFC uses!

And it’s also great for playing with families. It inflates the egos of the parents and grandparents who, with their knowledge of when the first Rolls Royce was made and by whom, whip the same kids who had just taken all their money in Monopoly or got 12 points for using “twerk” in Scrabble.

It’s a game to make non-board gamers feel good, as they can win without any of the skill or cunning any of those other games require. One that gamifies commercialization, rather than poses some sort of challenge.

Maybe I’m just jealous that not only do I never win, I don’t get even get to play. Whenever the game comes out, I’m always stuck asking each person: What has been Skittles’ advertising slogan since 1994? And just how many colors are there in a standard pack?

And maybe it’s because my present of the excellent board game Tsuro got completely overlooked this Christmas in favor of yet another interminable round of Logo.

But Christmas gaming for me should encapsulate the cheeky nature of the best board games. The sneaky lying and playful backstabbing. The battle between the elders’ guile and the youngsters’ enthusiasm. Team wins and heartfelt team losses.

Maybe that’s just on the TV, though. My families’ Christmases seem shockingly realistic. Never bad, and never cinematic, either. And, thinking of it like that, maybe The Logo Board Game is the perfect game after all.

Monopoly: The Game for Every Age, Every Generation.
Previous Post