My girlfriend and I moved in together about a year ago, and about six months into cohabitation, she convinced me it was time to upgrade our television. I was fine with the 27” square clunker I had. I didn’t want, or need, a 40-plus inch 1080p flat-screen. 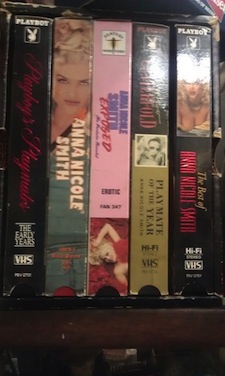 His buddy, ever obliging (and even more advanced because he was the first on the block to own a VCR) lent my father said VCR for a secret bootleg session. Hark! Where in the video store were these tapes kept? My interest was piqued; perhaps I was too curious a six year old.

I don’t know how many trips to the video store it took before I discovered there was a secret back corner room. If memory serves me correct, there was a heavy curtain blocking off a broom closet-sized room from the rest of the store. The concept of a video rental store was new to my town – it was usually crowded, and to my young inquisitive mind, this could be both good and bad for snooping. Namely, someone might catch me or everyone might be distracted.

The most I could score were fleeting glimpses into this obviously not-for-kids room. Quick glances showed me some tape covers with much teased hair (usually blonde), long legs (usually with high heels at the end) and the occasional embracing couple, with a sultry air about them (not that I could have described them as “sultry” back then.) Those sleuthing adventures in Videomart One started my life of (minor) perversion and a desire to know where all the “adult” rooms were in all future video stores I would grace with my membership. 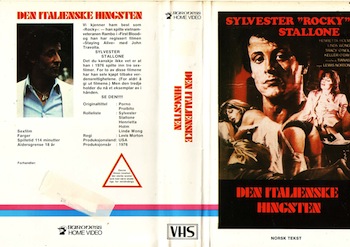 The cover was a drawing of Stallone, circa Rambo (I knew this because he was wearing a red headband, knot turned sideways, just like the titular hero) and the back had some grainy shots of naked people standing in a circle, seemingly jumping up and down.

From this poor quality screen shot I couldn’t tell who was in this group, or why they were standing in this circle. I didn’t stay in the room too long, fearing that my friends (who were equally curious) would make fun of me. This fear has kept me on the from entering many other back rooms, only stealing glimpses when I think no one is looking.

I never did get to see Italian Stallion.  Some modern day research tells me its actual title upon release was The Party at Kitty and Stud’s. IMDB.com confirms that one of its video incarnations did feature a cover picture of Stallone as Rambo.