I think back to the days when I was young and used to play make-believe scenario games, possibly a precursor to LARPing – something I’ve never done but assume follows similar rules—with the neighborhood kids. Most of the games dealt with one 8-year-old unloading a Hadoken-like blast to another 8-year-old. The recipient of said blast would call out that his powers included super speed and he was able to evade and outmaneuver the blast and reach the aggressor quickly enough to deliver a fast blow to the gut.

Little did he know that the aggressor also had super strength, and that that countering punch to the gut would not hurt him. It was a decent back-and-forth, evade-and-attack style game that most young kids play – a geekier and more contemporary take on cops and robbers, cowboys and Indians.

They adapted his standards, his morals, his ethics, and even his shorts-over-tights attire.

There was always the annoying spoiled child – the one who was outside solely because his parents forced him to run around and be social with the others, in hopes that he would shed some weight, much to his dislike. He also had super speed, super strength, and, when everyone else ganged up on him, he pulled out the invulnerability card and claimed to be invincible.

His super speed was faster than all other super speeds; his super strength was greater than all the others’ combined. This consequently rendered the game unplayable and it usually ended with a self-perpetuating you’re-cheating-no-I’m-not argument that went on longer than the actual game itself. This was the same kid who would pull out the “gun” in a game of rock-paper-scissors, and when he really wanted to get to you, especially if you decided to use his own obtuse gun trick on him, he pulled out the end-all, be-all move: God, the alpha and omega of everything. I never did like that kid. 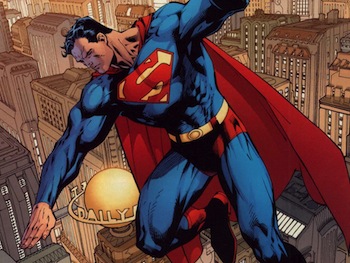 And thus it was under this same annoying and lackluster, unimaginative formula that America’s first superhero was born. He’s faster than a speeding bullet, more powerful than a locomotive, he can fly, he shoots lasers from his eyes, he can breathe ice onto anything — a power that I’ve always thought seemed out of place, even for Superman – bullets deflected off of him, leaving even his clothing untouched and impeccably clean. Even as an 8-year-old, my suspension of disbelief with the Kryptonian was hanging on an old, torn and tattered thread.

It wasn’t until one fateful day in the mid-’90s, when I was trading X-Men cards with the same neighborhood kids, that the offending kid, Christopher, walked by, ostentatiously proclaiming with a smug look on his face, “Superman died!” – as he handed us the comic, showing us how Doomsday had killed him in some ultimate battle in the streets of Metropolis.

I thought to myself, I guess Superman wasn’t a spawn of Christopher’s imagination after all. Could it be possible! With Superman’s death, there was a place for better and more believable heroes to come in and take his place; a will to power to bring about change, something to strive toward. We no longer needed Superman. 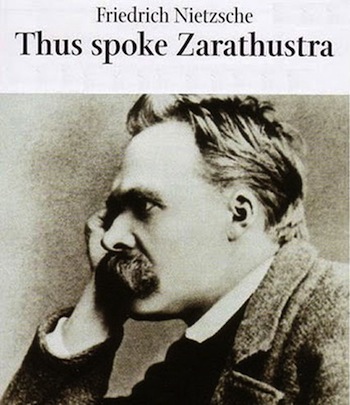 Let us smell the metaphorical decomposition of his body, because even gods decompose. I cheered at Superman’s death because it put me in a place I thought was beautiful, side-by-side with the rest of the world – a nexus of creativity and innovation.

What was the point in reading a comic or watching a movie if you knew the outcome would be that no harm can come to the protagonist? There’s no real conflict, no rising action, no falling action, no dénouement. When it came to Superman, plot devices were cheap and recycled.

Years later I came to equate Superman’s death with Nietzsche’s Thus Spoke Zarathustra and Zarathustra’s claiming that God had died, in the all-too-well-known Nietzsche quote, “God is dead.”

The death of God in the Nietzschean sense was more than the disappearance of a body or a being; it was a deeply rooted paradigm shift around metaphysical meaning, the complete loss of belief in the zeitgeist of the world and all of its systems of value and morality. Since God can no longer provide values and morals for us, the death of God is the beginning of change.

Superman was never the superman, das übermensch in Nietzschean terms, or the provider of a new breed of values (in superheroes). Superman was always more than the superman, he was God. Just like God, the creator, from Superman came all other superheroes. They adapted his standards, his morals, his ethics, and even his shorts-over-tights attire.

Superman could even hear every cry for help, much like God hears every prayer and solicitation. His true name, Kal-El, further suggests the essence of his being, as “El” is the Hebraic scripture word for God. Superman is solidified as more than God incarnate, because as God’s son and God’s incarnation, Jesus was but a mere mortal – Superman was God actual. (“He shoots fire from the skies, and it is difficult not to think of him as a god,” said Batman in Superman/Batman #3.)

There are no questions when it comes to God. One cannot question the unquestionable. Superman was just that. 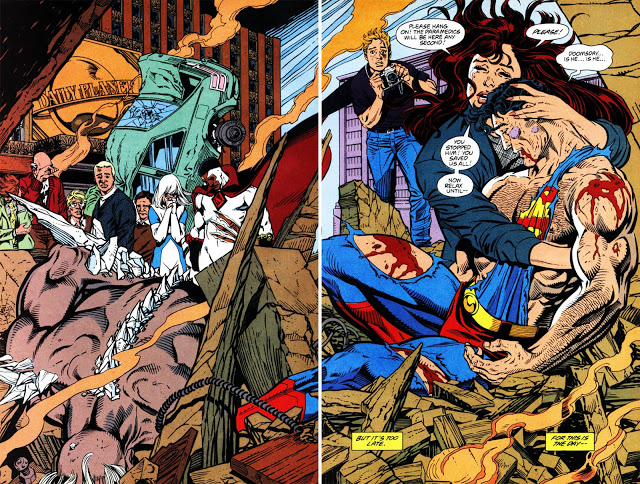 Those feelings of excitement were quickly overturned when Superman was brought back to life, somehow. I refused to read how this happened and still, to this day, couldn’t care less. I could just see Christopher right now, as we were playing outside, which always led to a shouting match where he would have claimed he merely faked his death.

I’ve slowly come to believe that no piece of media with Superman as a protagonist can ever work well. I remember Superman flying into the sun and not dying. (He simply “became” the sun.) I remember forcing myself to watch Superman Returns and wanting to leave after a bullet hit him in the eye, only to collapse in on itself and fall to the ground. How can anybody fight someone so untouchable? Then I watched Superman lift up an entire island with his bare hands. 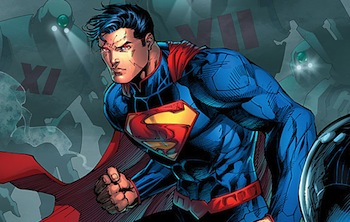 I’m sure the question of kryptonite as a legitimate weakness comes to mind. But if Superman’s only antagonist is an intergalactic mineral so rare that it is nearly impossible to find (which never stops it from being the driving force in almost every major Superman storyline), so much so that it doesn’t even create a concern, that’s no weakness. He also became immune against its effects later. Where does one begin to deconstruct such a creation?

There are parallels to Superman’s and God’s death in Thus Spoke Zarathustra. After the titular prophet spoke, informing the people of God’s death, he preached that there would be supermen arising to take his place as the new guides for what is to work in the future. Shortly after Superman died, four new supermen showed up claiming to be taking his place to keep the values set forth by Kal-El.

Was I Zarathustra, preaching to my friends that in this Superman-free era, writers must find a way to create a standard of hero – not to rival Superman’s powers, but to create a good story, missing from Superman’s world all along? 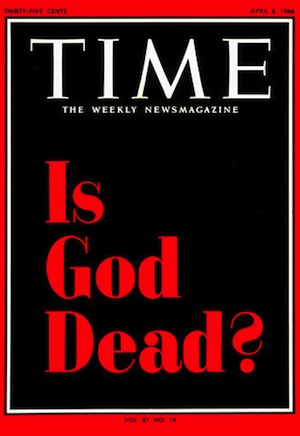 Superman is not for me solely because of the association with Christopher and the schoolyard games. It became bigger than that and bigger than Kal-El himself. I could not handle what he stood for.

Superman was everything that was wrong with the Western world and, more precisely, American culture. He was the zeitgeist of American exceptionalism, xenophobia, McCarthyism, the destruction of culture of the oppressed through cultural diffusion. Perhaps one of his most iconic moments was when Superman renounced his U.S. citizenship in Action Comics #900 – though this was just an attempt to create a broader, more worldly character after 80 years of American cultural ideals and undertones.

Nietzsche killed God in order to achieve a newer world, free from the binding ties. We must kill Superman to move on to newer and better heroes.