I used to believe in a fair and just world.

Then my parents gave my grandmother a Super Nintendo for her birthday.

That’s right, a Super Nintendo, the holy grail of presents for almost every kid growing up in the ’90s. My grandmother, whose knowledge of videogames barely escaped Spider Solitaire, was gifted the only thing I wanted right in front of my 11-year-old face, and I just had to watch.

At first I was shocked. I kept waiting for the curtain to get pulled back, the confetti to fall from the sky, and the revelation that it was for me all along ha ha ha! I mean, how could they not understand how cruel this was? They knew how badly I wanted that toy – there was no way they could’ve missed my entreaties.

I had given them presentations! I had calculated, extrapolating averages based on past totals, how many birthday, Christmas and graduations gifts I would need to sacrifice in order to reach the $200 price tag. I had showed them crude cost/benefit analysis graphs, alongside promises of how productivity around the house would increase tenfold if I were able to unwind with advanced 16-bit graphics.

Once the fog of confusion cleared, the red haze of anger set in, spurred on by their selection of games. What should have been Super Metroid or Final Fantasy II was PGA Tour ‘96, Wheel of Fortune and Bubsy in Claws Encounters of the Furred Kind. 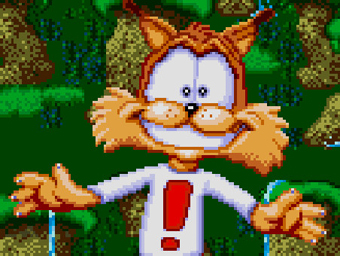 Bubsy, a low-rent knockoff of Sonic. They couldn’t even have gotten her the one with Super Mario World packed in.

It was the twist of the knife, that stupid grinning orange cat. I could almost see them sitting in the videogame aisle at Toys “R” Us, scheming over which title would be the biggest affront to my finely-tuned taste.

Much like the Manson murders heralded the end of the innocence of the ’60s, that birthday betrayal was the death of my youthful enthusiasm, the void of understanding filled with a searing sense of injustice about the world around me. I entered my teen years with a sense of righteous indignation, trading my sweeping moralistic fantasy epics for H.P. Lovecraft’s cold cosmos and Stephen King’s arbitrary and brutal sense of poetic justice. I didn’t have time for stories where good deeds were rewarded and heroes, no matter how terrible their circumstances, always came out on top. Drizzit Do’urden could get fucked for all I cared.

Like most teenagers, I began to hover around the periphery of existence, always watching but never involving myself. I flitted from family gathering to family gathering, nodding away casual questions about school and my friends, happy only when I was left alone to wallow in the delicious misery of being 12.

Despite this, my parents kept throwing me in the car and dragging me along to various family functions.

My grandparent’s house was probably not unlike the one that you yourself spent many a dusty day in, a wasteland of entertainment undercut by shag carpeting and a sense of style that never quite made it out of the LBJ administration. They never had the right kind of soda, Coke and Pepsi replaced by strange off brands that came from the tiny store nearby.

My grandmother, a wisp of a woman, was difficult to grasp. She oozed detachment, never seeming to express a great interest in what we were doing with our lives. There were no freshly baked cookies or gingham tablecloths, just checks on our birthday and the clink of ice in a glass.

She stood in stark contrast to her husband, the man who would always be “grandpa,” a stout fellow with bright white hair and a bellow of a voice. He’d grab my hands when I came in the door and shake them so hard it felt like they’d be torn from their sockets, his smile so wide he had to shut his eyes to accommodate it. Despite this enthusiasm, the gulf of generations between us was too far to cross by traditional means. I loved videogames and Dungeons & Dragons, he played golf and liked to eat things he caught himself. My burgeoning adolescence saw these differences as inviolable barriers between us.

It didn’t help that I made a fucking point of playing that Super Nintendo, to the further exclusion of everything else. Of the three available games, I tended towards the comfortable platforming of Bubsy, carefully mastering its floaty controls and obtuse mechanics. It was somewhere around the space station level that I noticed my sister plopping down on the floor next to me.

Four years my junior, she had only occasionally dabbled in my beloved hobby, mostly by demanding my help in beating the vicious The Little Mermaid NES game. She and I were never all that close, locked into traditional gender roles regardless of how much my parents tried to fight it with pastel yellows. She had her Barbies, I had my G.I. Joes, and never would the two worlds meet.

Now she sat at my side, equally transfixed by the prospect of collecting little balls of red yarn. After a few hours of watching me play, she asked if she could have a turn.

If you keep getting those double eagles, we might have to break these hands of yours.

Over the next few months, every single visit to our grandparents house began the same way: we’d perform our due diligence, escape the gauntlet of cheery relatives and play Bubsy. We would sit in near silence, occasionally gesturing at some secret barely missed. Like two people chained together in a horror movie, we were working together because we had no other option.

Despite the original intention for the present, my grandmother never touched the controller that I so coveted. She might call out words from her chair when I ventured into Wheel of Fortune, but she never once slipped that PGA Tour ‘96 cartridge out of its plastic sheath for a stirring afternoon on a virtual fairway.

It was my grandfather who took the game for its first spin, beckoning me over one afternoon to show him how the thing worked. I took to the controls easily, guiding my grandpa through the double button press power arcs and club selection. We tooled around for a bit before he shooed me away. More curious than jealous, I left him to puzzle over the arcane machinations that dominated this strange version of his most beloved sport.

Almost a year later, he challenged me for the first and last time. He had been practicing, you see, and was confident that he could take me in a drop-down drag-out 18-hole death match. I knew he was serious when I walked in the room and found him standing in front of the television, the recliner empty save for the game box casually tossed aside.

I’d like to say it was an epic battle of the titans, the young upstart struggling against the experienced master whose knowledge of the game superseded his aging hands. I wish the song from Chariots of Fire had roared over the final hole, both of us one stroke under par with a Hail Mary shot from either one of us taking the cup.

But in reality it wasn’t anywhere near that dramatic. I demolished him, the highlight being a double eagle on a par 5 course, a hole in two essentially.

As the final score card scrolled by on the screen he set his controller down and took my hands in his, looking me directly in the eyes, an uncharacteristic stillness coming over him. I panicked. Had I broken some unknown code that stated that youthful upstarts are to be crushed? His large hands moved over mine for a second before he tightened his grip.

“If you keep getting those double eagles, we might have to break these hands of yours.”

He fell silent. One beat. Two. Holy fuck, what had I done? 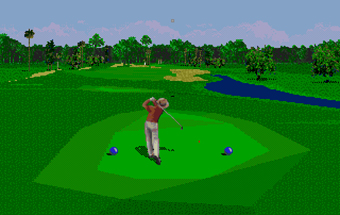 Then, guffaws. He dropped my hands and backed away from me. “Just kidding, kid. That was a good game, we’ll have to do it again sometime. Just remember about the double eagles.”

He never forgot. To this day, every time I see him he grabs my hand, his grip slowly growing looser as his belly grows bigger and his hair whiter, and loudly declares “Hands looking good, haven’t been hitting any double eagles lately, huh?” He’ll laugh and clasp me on the shoulder with his other hand, his eyes alight with a powerful fire.

That was the only game of golf we ever played. I like my hands enough to never take him up on his threat.

Years passed and my parents, as if to make up some sort of karmic debt, eventually bought me a PlayStation. I went off to college, stopped attending family functions and met the woman who would be my wife.

My grandmother, already little more than a ghost in her own house, succumbed to the breast cancer she had been battling my entire youth, a bitter fight that reframed her coldness as what it really was: a strength born of the difficult life she had lived. It wasn’t more than a year before my grandfather met another older woman in the retirement community they lived in and decided to let go of the accumulated detritus of his life with his one true love. As family, our job was to come and take what we wanted, little of it carrying more than sentimental value.

There was only one thing I wanted.

It was still there, sitting on top of the VCR. Like all Super Nintendos, it had started to take on a sickly yellow hue, the buttons all sticking a bit but eventually sliding into place. The title screen for Bubsy flickered to life. I unwound the controller cable, wrenched the controller into place, and guided it down onto the floor. I took up my old position and began to play.

Soon my sister sat down next to me, reminding me of all the secrets I was missing in the first stage. We passed the controller between ourselves with each death, our adult hands fumbling with the device meant for children. When she lost our final life, long before the climactic final battle, I put my arm around her shoulder and caught something in her eyes, a look I had seen before: the mad passion of familial love that transcended both victory and defeat.

Over the years my sister and I had drifted further apart than before, our orbits grazing each other only a few times a year, but in front of that Super Nintendo, the one meant for our disinterested grandmother, we were a family again.

That same Super Nintendo now sits in my garage, the cords still tightly wound around it.

What’s funny is that, despite my childhood, I could care less about it now. My 30-year-old eyes don’t see the same shimmering potential that they did more than 15 years ago. I can leave it sitting in a paper bag and feel happy just knowing it’s there.

When I look at that Super Nintendo, yellow and cracked, I think of my family and smile.

Jason Rice is a public educator whose students can never know his secret identity as a writer. You can find him at Pixels or Death or on Twitter @JasonRRice.

Lemons, Trawlers and a Bit of Alright