As sad as I am to hear that Geoff Johns will be stepping down from Green Lantern after being the writer on the book since 2004, I was more bothered by the “Rise of the Third Army” storyline that failed to deliver on the same scale as “Sinestro Corps War” or “Blackest Night.” 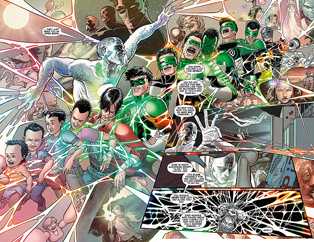 Now, Johns has crafted the “Wrath of the First Lantern” story, where the very first Green Lantern has been released from his prison and is now wreaking havoc on the entire GL universe. Apparently, the First Lantern has the ability to warp people’s minds and create false histories for them, but ones which they believe to be completely true. And of the first three issues released in this new crossover, Green Lantern: New Guardians is easily the best one.

Tony Bedard takes Kyle Rayner on a mentally exhausting journey through his life with Alex (the girl in the refrigerator), his life with his neglectful and absent father and his time as the only hope for the Green Lantern Corps. Bedard shifts between these moments effortlessly, even bringing humor to the situation and enunciating what makes Kyle such an important Green Lantern.

What’s also noticeable is how much fun Bedard and artist Aaron Kuder have with the visuals. The tendrils with which the First Lantern ensnares his victims are well drawn despite their spindly, disorderly design, and character faces help convey apt and realistic emotions, particularly with the clarity of the ink work.

I guess what struck me the most about New Guardians was just how well it surpassed my expectations. I didn’t have a lot of belief in this book, so I’m glad I spent the money on it. New Guardians isn’t a stellar read, but it’s enjoyable, and it captures everything special about Kyle Rayner. Given the emotional wringer through which the First Lantern puts him, I’d be surprised if Kyle emerges as the same man readers have come to know and appreciate. That is the lasting impression of this book.

Moments matter, and Tony Bedard seems to understand the importance of this concept as well, delivering a solid story aptly illustrated by Aaron Kuder, and one worthy of your time, particularly if, like me, you’re a Green Lantern fan. 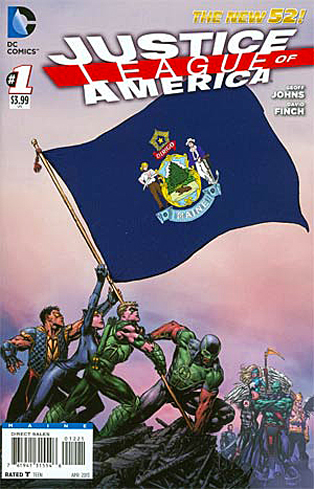 Does DC really need another Justice League book? Geoff Johns’ initial work on Justice League has been uneventful and forgettable. The first arc with Darkseid was a shallow, chaotic mess. The second arc with Graves was a poor, if more engaging follow up, and just as he started to pick up steam with the “Throne of Atlantis” story, he shifts gears and opens up the doors on a new team.

And I have to admit, the concept is pretty cool.

The comic is not without flaws. Johns so badly wants to build the suspense that part of the issue is wasted on cryptic and shadowy characters, a mysterious island and Green Arrow being attacked by some version of the Justice League. These moments break up the pacing of what is actually a pretty interesting story.

In the other moments, Johns gives readers mini-origins of the characters – vignettes that show the essence and traits of his players. These occur in two-to-three-page spurts, but each mini-story is well written and shares enough of the character’s concept in order to make him or her clear to the reader. Of course, Steve Trevor and Amanda Waller provide the necessary (and exhaustive) exposition needed to bridge each one of these episodes, but the stories they tell are both intriguing and necessary, particularly for new readers.

This type of newness makes Justice League of America a great starting point for anyone unfamiliar with the characters. David Finch is a good choice to depict the heroes, but my one complaint is how he draws faces – often overshadowed and emaciated looking. His characters in costume look superb, though. Hawkman and Martian Manhunter, in particular, look like brutal forces of nature. And where he’s given the space to draw close-ups, Finch creates some spectacular images that aid the mood and emotion of the moment.

When readers find out the purpose behind the Justice League of America, I think they’ll be intrigued by the concept – I know I was. The heroes will serve a bigger purpose than being the on-call, super-powered protectors of our nation, and when that is revealed, the comic takes on a different tone and becomes more than just an ancillary backup to Justice League.

Plus, issuing covers with individual state flags was a nice touch, and I was proud to see the league hoisting the Maine flag while other members looked on proudly. I know it’s a gimmick, but it was a smart move and way to localize the heroes of this fictional and supernatural world. 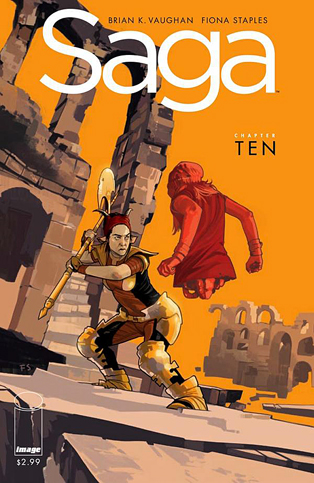 Bannen’s Book of the Week: Saga is the reason I will never write comics. There is no way on God’s green Earth I could possibly craft something this creative, original and memorable. My one saving grace is the fact that I am able to experience a series that will go down in comics history as one of the greatest ever made.

The comic is a mixture of fantastic storytelling and superb art, and both pieces are perfectly balanced in this issue. Vaughan plods along with a blend of humor, characterization and sadness, bouncing between each emotion deftly and leaving no space wasted. We’re given a bit of Marko and Alana’s history, and while it only takes up the first five pages, it builds enough on what was established that the transition between the past and present is fluid and smooth.

The shift to the present and the ensuing conflict make the rest of the comic such a pleasurable read because while most of Saga #10 is character and story driven, Vaughan still finds a way to expand the imaginativeness of his world. The introduction of a planet-sized baby is part of it, but the inclusion of every major character and a seamlessly woven together situation show that Vaughan knows how to bring his lateral stories together for a powerful and emotional connection. What struck me most was the final page where a secondary character seems to have met his fate, and the sadness with which I was struck at the moment and the image.

The vividness of this moment is due to Fiona Staples, who continues to produce page after page of outstanding art. Her use of colors, both foreground and background, create some of the best imagery of the series so far. She plays with character designs, too, given the opportunity to draw upside-down-faced demons, a flaming gorilla and a hatched creature known as a “time suck.” Backdrops, in particular, give the panels vibrancy, and the color shifts, particularly in the final moments of the book, offset the urgency of one group and the plight of another.

I hope you’re reading this book. Every comic book reader should be reading this book, and if you’re not, shame on you. You should feel very bad about yourself. Saga is the stuff of dreams, and where the comic market is saturated with books, spending your money on something that will keep you invested visually, narratively and emotionally is all you can ask for.

Where Is My Mind?