Artist’s intentionality is a tricky thing to deal with in criticism. Does the artwork mean what the artist claims it means or what the audience interprets it to mean? It’s a question that artists and critics have debated for many years longer than videogames have existed and they are going to debate it for many years more.

The truth, I think, is somewhere in the middle. The artist’s intent isn’t the be-all and end-all of what the artwork means, but neither is it to be entirely discounted. When we judge an artwork as either being a good or a bad piece of art, we are usually judging it in relation to what the author intended to do when they created it – or, at least, in relation to what we surmise are the author’s intentions from the artwork itself. Watching Inglourious Basterds, I don’t think “This is a terrible rom-com!” because, clearly, Tarantino wasn’t trying to make a rom-com. Ultimately, what the audience gets out of the artwork is final, but what the audience gets out of the artwork is, in some way, going to be influenced by what they think the artist was intending to do.

Both Jason and I loved the hunt, regardless of what side of it we were on.

When it comes to Far Cry 3, despite what the the game’s author, Jeffrey Yohalem, might think, I am fairly confident that most people got what the game was trying to do – what Yohalem’s intentions were. The moment MIA’s “Paper Planes” starts playing, putting gunshots over the top of pop music, it is clear that Far Cry 3 is trying to say something. The way the escapades of these carefree, entitled 20-somethings melds seamlessly into killing and hunting. The dubstep playing over the top of the glorious weed-burning mission. The flourishing of Far Cry 2’s minimalistic design with ‘gamey’ XP systems and skill trees and side quests. Clearly, Far Cry 3 wants to say something about the intimacy of pop culture and violence, something about the dark nature of what we find entertaining, something about how, for Jason Brody, this is really all just a game – literally and metaphorically.

The game makes its initial mission statement so clearly – “This is what this game is about” – and, for the first couple of hours, it manages to hold onto this. For a few brief hours, I get the sense of Jason evolving from this entitled, carefree dudebro to someone forced to take on a terrifying amount of responsibility. At first I would never travel by road as the enemy patrols were too regular. I would move at a snail’s pace through the trees, keeping an ear out for wild cats. But slowly I adapted to the wild. I learned how to bend it to my will. I hunted animals to survive and become stronger. I would fuss over every gunshot, knowing what kind of attention it would bring. I learned how to be cautious and how to be deadly. I learned the rhythms of being a predator to some and prey to others. 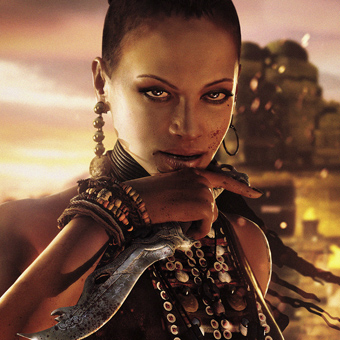 And, all the while, XP bonuses are flashing up on the screen and dubstep is thumping. Along with the terrifying responsibilities and the life-and-death situation was the feeling that Jason had never felt more alive. That he was enjoying this. Both Jason and I loved the hunt, regardless of what side of it we were on.

For a while, Far Cry 3 clutches onto that paradox at its thematic heart and holds onto it with both hands: this is life-and-death and this is just a game. The problem is that it doesn’t take long for the island to feel safe. Capture a few outposts and the pirates all but disappear from entire regions of the island. Take a few upgrades, and you feel like nothing can stop you. There’s still the surprise of a tiger waiting in the bushes, to be sure, but the roads become so safe that it hardly matters. After a while the ‘life and death’ fades away and all you are left with is ‘just a game’.

One of the biggest criticisms Far Cry 3 has received is its colonial undertones. A white dude marches into a land of generically tribal savages and with his superior white-man strengths and intelligence, mixed with some generic black-magic voodoo, saves the day and gets the savage girl. The first paragraph of TV Tropes’s “Mighty Whitey” page practically needs a Far Cry 3 spoiler warning attached to it.

Yohalem seems to think he is actually subverting these ideas by giving the natives agency and making Jason their tool: “Jason is basically a gun, that is upgraded by the natives on the island.”

Except, despite the skills I unlock, after a couple of hours it no longer feels like Jason and I are adapting to the jungle. After I catch a few outposts, the island has become so safe for me that instead of lurking in the bushes, I start driving down the roads. I hear a engine and I don’t fear that it might be an enemy, I know it will be a friend. Simply by playing the game, I make the game boring. I depopulate it of interesting things to do. 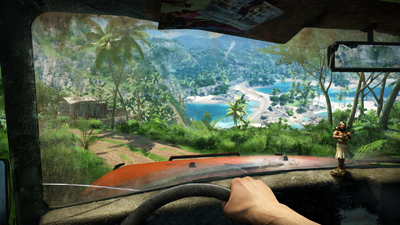 This isn’t a subversion of the typical, racist, colonial tropes; this is colonialism. Jason doesn’t change to fit the world; just like white people have done throughout history when they land on islands populated by ‘native’ people, I change Rook Island to fit my world.  I spend hours just on the first island, feeling safe and secure knowing I own all the outposts. When I finally go to the second island, I am wearing a paramilitary uniform for the entire time, making sure I am just as safe as I was on the first island. I never feel anything but safe. I feel powerful and comfortable. I colonize it and, in doing so, I gentrify it. I make it safe. I make it boring. Jason doesn’t learn to live off the land; he molds the land into what he needs it to be so that he doesn’t have to change.

This is something that Sparky Clarkson notes in an article earlier this month looking at how the sequence with Buck and Keith (a sequence that Yohalem attests to as particularly challenging and significant for the game’s core audience) fails to have much effect. Clarkson suggests that the scene could have been much stronger and could have left much more of an impression on the player if it didn’t resolve so neatly with Buck’s death, if the player (like Keith) had to live in fear of Buck possibly coming back at some point. Clarkson concludes:

As it is, Far Cry 3 doesn’t do that. It gives the player power, and lets him feel comfortable. It lets him feel like he is making the right choices. When Keith says that none of Jason’s friends are coming back from this, it lets him be wrong. Because it lets you kill the bastard, and it lets that be the end.

Just as the player is able to colonize the entire island and make it safe, so too can they kill Buck, making sure they are safe from him. Any problem the game throws at Jason can be easily exterminated. Far Cry 3 doesn’t make us confront the dark paradoxes at the core of what we find entertaining; it simply gives a white man the power to mold his world so that he can feel comfortable in it. It never quite becomes the critique of entertainment media it wants to be, only ever being just entertaining.

Another scene that Yohalem calls out as shocking for the player and crucial to the game’s themes is the scene late in the game where Jason must torture his own brother, Riley. Not only does this scene fall equally as flat as Buck, but it neatly summarizes everything that Far Cry 3 gets wrong. Yohalem says: “It’s torturing your little brother, and there’s no real reason to be doing it. You’re not saving the Earth, you’re not doing anything that makes the act okay. That was meant to really shock people.” 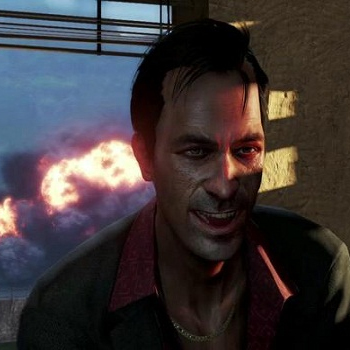 The intentions behind the scene are clear: Jason wants to kill Hoyt because he believes his brother is dead. Now he finds out his brother is alive, but he still wants to kill Hoyt so badly that he will torture his own brother just for the chance. He is willing to sacrifice the thing most precious to him for a chance at revenge. So driven by bloodlust is Jason that the QTE buttons just appear on the screen and I punch my brother in the face.

But then my accomplice cuts the security cameras. Jason stops punching his brother and lets him know it is me, Jason. After a quick talk, Riley hardens up and gives Jason permission to torture him. He says he is ready. He understands I need to fool Hoyt so go ahead and hit me. The cameras come back online and the same prompts appear and I continue to torture my brother.

But all the gravitas of those initial punches is gone. The moment Riley gave me permission to torture him, that powerful message of a man so blinded by his addiction to bloodlust that he has lost sight of what he came to save was completely lost. When Riley told me it was okay to hit him, the game promised me it was okay to hit him. Far Cry 3 promised me that this was a safe place to do messed-up things. There would be no repercussions. Riley was cool with this.

Its initial intentions are crystal clear, but by allowing me to feel safe and comfortable, the game became exactly the thing it was trying to critique.

After he finishes torturing his brother, Jason looks down at his hands and laments “What have I become?” But Jason hasn’t become anything. The world hasn’t changed Jason and the game hasn’t changed me. Jason has changed his world. He has colonized and gentrified it and created a space where it is safe for him to treat violence as ‘just a game’. And, in the process, Far Cry 3 makes it okay for me to just have fun.

For all its inspired parts (the clever use of dubstep, poker games merging into boss battles, breathless hallucination sequences, a majestic open world full of things to do), Far Cry 3 never successfully forces me to confront any harsh realities about what I find entertaining. Its initial intentions are crystal clear, but by allowing me to feel safe and comfortable – by telling me that it was okay to hit Riley – the game became exactly the thing it was trying to critique. Just as Jason never really has to become anything more than the entitled white dude he enters the game as, Far Cry 3 never has to become anything more than a mechanically competent shooter. Rook Island is a fraud, to be sure, but not in the way it was intended.