EA’s NHL series is back with a new physics engine, AI improvements and an updated presentation that will have gamers of the previous installments digging back into their wallets for what proves to be the best NHL videogame ever.

The sport genre of videogames has always been somewhat repetitive. With titles being released year after year, it begins to feel like the same game all over again with nothing but a roster update. EA’s NHL series retools each year to consistently support improvements that not only heighten the game’s realism but also improve on what was built before. And also includes roster updates. NHL 12 will have a familiar feel to it if you are coming from last year’s title, but will feel almost alien to those who held out on the previous game. With big improvements to its physics engine and a complete overhaul of the in-game menu with the Action Tracker, there is a lot to love about this year’s release. 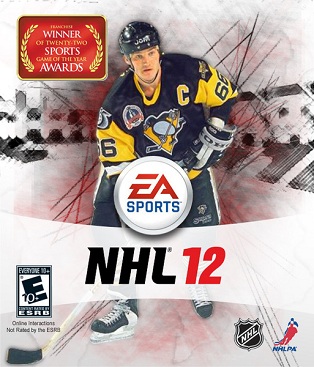 Gameplay is similar to last year’s title, but with subtle improvements such as balance control and that upgraded physics engine, players of NHL 11 will notice a difference right out of the gate. The weight of the game feels heavier – players react according to their size and stature. Try and line up a hit on 6’9” Zdeno Chara with 5’9” Martin St. Louis and you’ll sure enough bounce right off.

The impact of balance control is deep – it can affect everything from cutting out of a corner, recovering from a hit or even delivering your hit, which can knock your player off his skates as well. This is an exceptional addition, mainly because it makes you think a little bit more about throwing that big hit and risking falling out of position. A couple times, I found myself attempting a hit only to miss and fly right over the boards. This led to an odd man rush on the net – not a wise move. Yet, when lined up just right, a big hit will knock helmets off heads and shatter glass, bringing the crowd, both in the game and in the living room, to their feet.

The AI has also improved and you will notice a conscious effort taken by the computer to cut off your passing lanes and open shots. The improved awareness of players will also have you second-guessing those home run blue line to blue line passes through traffic. More likely than not, they will backfire 99% of the time, as I learned very quickly. All this adds up to create an extremely entertaining experience as well as the most realistic portrayal of the game I have seen outside of the real deal.

Many of the game features, such as Be a Pro, received a face-lift this time with the addition of the “earn your ice time” feature. Starting off, you’ll begin your career either as a 15-year-old in the CHL or jump right into the draft. Long gone are the days of jumping on the ice whenever you damn well felt like it. This year, if you play poorly, you will be rewarded with less ice time, as the game will simulate in-between shifts. Go above and beyond and you will notice the coach giving you more ice time, as well as tasks to complete like putting up the first goal or shutting down a power play. Completion of these tasks will earn you more experience points and thus allows your player more growth and talent as the season continues.

At first, I was put off by this since I was used to the run and gun style of the previous games. It does, however, make you play smarter and really play your position. Be a Legend mode is also new, allowing you to lace up as one of nine hockey legends to see how they fare in today’s NHL. I never really cared about playing as a great since the game is so tailored for your created character to be “The Next Legend” that it fell short with me. There’s also the trouble of unlocking them, so for the casual gamer it would have been nice to just jump in and battle it out with your friends as some of the greats. Maybe next year.

The biggest addition, and by far my favorite, is the Action Tracker. At any time in the game you can pause and scroll through replays of goals, shots, hits etc. This will also give you stats on players, shots on goal, shot selection and real-time updates as the game progresses. It really does complete the full experience and allows you to watch and record all your favorite moments at any time as well as save and upload them. This is exactly what all sport games are missing, and should be mandatory for every sport game from here on out. Every hit, shot and goal is at your fingertips at any point allowing you to trash talk a little bit more. Sadly, this is only available for Xbox owners who have the 250GB hard drive. The cache on the 4GB will not allow for replays and that is a sad state of affairs.

NHL 12 is the most complete sports game I have ever played. Yes, there are little glitches and some players are WAY overrated (Cough! Carey Price. Cough!), yet its performance and presentation is, bar none, the smoothest and most tailored hockey game for fans ever made.

Rating: Five out of Five Pies
(a word about our ratings)

Sidney Crosby is a little bitch. Follow @Dave_Trainer on Twitter. NHL 12, from EA Sports, is available on PlayStation 3 and Xbox 360.

No Such Thing As Bad Anime