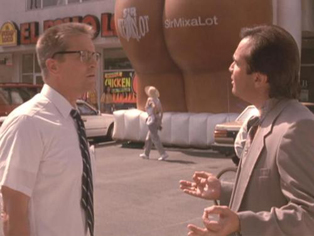 Falling Down has a lot riding against it. It’s a cranky baby boomer’s revenge fantasy and a Michael Douglas movie that’s not called Wonder Boys. On the other hand, it does contain some sublime early-’90s moments.

But yeah, it’s really not the sort of thing I should be able to identify with, this story of a creepy middle-aged divorcé fed up with the youngsters’ lackadaisical attitudes and the urban decay. But I can’t deny it, there’s something very satisfying about watching a dude on a mission stalk through a city, laying waste to anything that gets in his way.

Ostensibly, William Foster (A.K.A. “D-FENS”, after the vanity plate adorning the car he abandons in L.A. traffic) is just trying to get home for his daughter’s birthday, and he himself explicitly states that he is not a vigilante. But for a guy in a hurry he sure makes an awful lot of pit stops and even a few speeches. Foster kind of is a vigilante, albeit one motivated by peculiar notions of justice. He’s less Frank Castle or Vic Mackey and more Beverly Sutphin, the anti-hero of John Waters’ 1994 black comedy Serial Mom.

Waters has said that Serial Mom was a sort of wish-fulfillment for anyone who’s ever had the urge to deal with those who irritate them in the harshest way possible, and like the Serial Mom, D-FENS is often motivated by a rage that’s born of annoyance. He does lay out a Nazi-lovin’ shopkeeper, but he spends far more time fussing over nugatory concerns like the fast food joint that won’t serve breakfast after 11:30 a.m. and the shop clerk who won’t break a dollar. At times, Foster is an armed Larry David, making a stink about the annoyances most of us tolerate in deference to social pressure.

It’s certainly not a flawless film, and some might argue Robert Duvall’s wise detective character leans a little too hard on the old “retirony” trope, but director Joel Schumacher brings an ear for tone to Falling Down that he completely failed to bring to Batman Forever and Batman & Robin. Though the action is often

cartoonishly over-the-top, there is a real sense of danger, and it seems there’s always an all-out bloodbath just around the corner. More importantly, the movie also has a weapon upgrade arc. Throughout the narrative we get to see our hero gradually improve his arsenal, starting off with a baseball bat, moving on to a duffel bag containing “all the guns in the world” (as described by the girlfriend of the thug who originally owned it) and eventually working his way up to a rocket launcher.

As satisfying as that is, it’s a little disappointing at the end of the film when D-FENS goes from an id on two legs to a full-blown nut job and kidnaps his wife and daughter. Obviously, some sort of grim fate was inevitable; with no Richard Crenna to talk him down, there was no way Foster was going to walk away from his rampage quietly. Still, the transition is a bit abrupt, and when Foster wonders aloud when he became the bad guy it’s hard for a viewer not to wonder the same thing.

He’s certainly not the most sympathetic character in the film, at least not compared to Duvall’s Prendergast, but in most situations he encounters, Foster seems to be the lesser of two evils. Of course, this says a good deal more about the grim world that Falling Down walks us through than it does about either of the film’s two main characters. 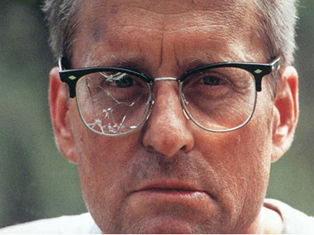 Filmed during the L.A. riots and released on the same day as the World Trade Center bombing and two days before the siege at the Branch Davidian compound (which ended badly), the film could be said to be a record of fear and loathing extant in the real world of early ’90s America.

Of course, in reality things don’t always work out the way they do in the movies. In reality, sometimes someone just builds a Killdozer.

We Have No Operators Standing By